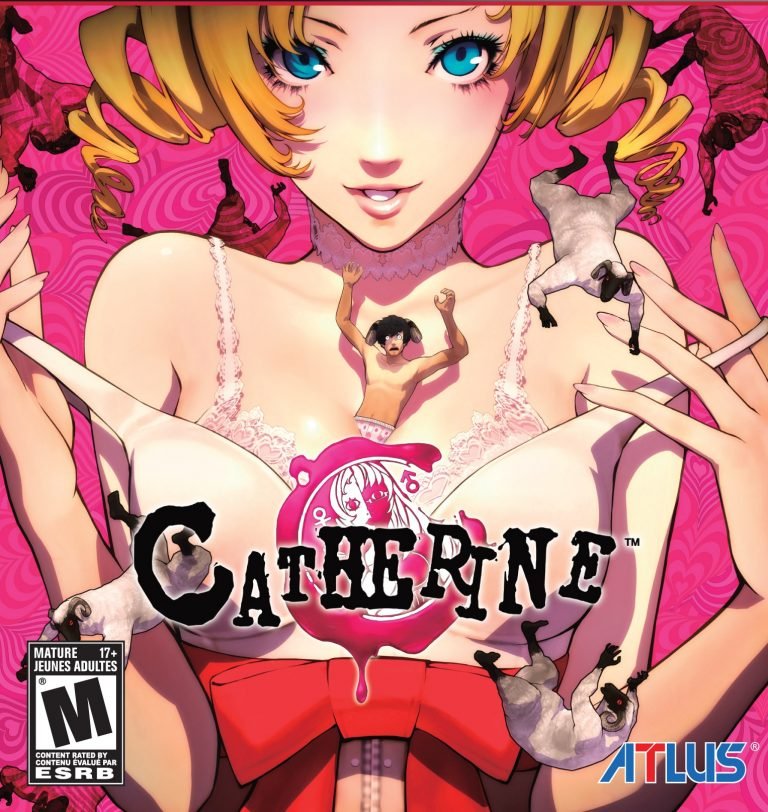 It seems like one of those obvious omissions in games when you stop and think about it, and yet it’s gone unnoticed for years. Relationships are one of the most important elements of the human condition, a concept that has been heavily explored in every medium to date. Except games. Catherine is the first game in quite some time to put relationship issues at the forefront, rather than as a sidenote to the usual world saving aspirations, and in doing so, it’s created an intriguing though somewhat unbalanced experience.

Love Is A Choice

Catherine begins with a situation that should be uncomfortably familiar to most people in their early 30s. Vincent Brooks, the hero of the game, is in a stable relationship that’s been coasting for years. His career arc is defined but unremarkable and he’s content to simply let inertia do the rest, spending his evenings at his favourite watering hole, the Stray Sheep. It all comes crashing down around him when his girlfriend Katherine suggests they take their relationship to the next level, and then immediately after, he begins an affair with the sultry, sexually charged Catherine. On top of all this, there’s a spate of deaths involving single men in bed, and he’s having dreams of climbing huge towers while something tries to kill him. To say the story is unique is an understatement.

Atlus has claimed that Catherine is their first experiment in producing a game for HD consoles and it’s an impressive debut. The visuals of the game cut dramatically back and forth between traditional anime cutscenes, provided by Studio 4°C, and in-game, cel shaded polygons. While both styles are appealing, there’s a noticeable disconnect between the fixed, traditional anime, and the smoothly animated, often motion-captured in-game visuals with its higher frame rate and more varied camera moves. The audio side of things is, as usual for Atlus, a real treat. As to be expected, there’s a distinctive Atlus hip-hop groove to the some of the tracks, while the puzzle modes get “remixes” of classical compositions from Bach and Dvorak with an urban beat and the occasional wailing guitar. Though the game lacks the ability to switch between the original Japanese and newly minted English dub, the English voice acting manages to acquit itself with believable performances from industry veterans like Troy Baker, Laura Bailey and Michelle Ruff leading the cast. There’s not a single weak performance, and combined with the unique sound design, the game is a pleasure to listen to.

Love Is A Puzzle

Catherine is divided into two monstrously different games. On the one hand, there is the actual “gameplay” game, which is Q*Bert-esque climbing experience. Players have to navigate a mountain of blocks by pushing, pulling and otherwise moving blocks in order to form a climbable path to the top. This is the “Nightmare” portion of the game that players experience whenever Vincent goes to sleep. Then there is the social/RPG element which seems like an expansion of the Social Link mechanics Atlus already explored to great effect in their Persona series. Here, Vincent is free to roam his favourite bar, the Stray Sheep, talk with friends, strangers, play an arcade cabinet version of Catherine’s climbing component and get drunk, because the drunker he is before bed, the faster he is in Nightmare mode. It’s here that most of the plot unfolds, and many of Vincent’s choices influence which way his morality meter swings, and subsequently affects the decisions he’ll automatically make at certain points in the game. If, for example, players have been choosing the path of fidelity, Vincent will make a concerted effort to stay committed to existing relationships at key points in the plot. If players have been choosing the path of temptation, those plot points will reflect his player-determined outlook.

Ironically, Catherine as a game is as conflicted as its themes. On the one hand, advocates of mature games, and Games As Art arguments will be overjoyed with the boldness of its vision. This tale of a man dealing with a choice between his established relationship and a new sexual temptation is refreshing. It gets a little weird towards the end when more paranormal elements surface, but for the most part it stays true to its intentions. The dialog among friends and other customers at the Stray Sheep reflects adult concerns about the longevity of relationships, the allure of adultery and the consequences of both. Never in a mainstream, commercial, retail release, has a game been so openly focused on male/female relationships as the crux, rather than as a motivation to go kill people. The material isn’t going to be hailed as Pulitzer-worthy, but the fact that it tries at all is admirable.

On the other hand, this bold attempt at more meaningful narrative in games is in violent opposition to just how difficult the game itself is. The people who would be most likely to appreciate this non-traditional gaming narrative are the least likely to actually experience it first-hand without resorting to the inevitable YouTube video streams. It’s been well documented that the game was considered so difficult in Japan that it had to be patched to make it less daunting. For any player in the West—even a hardcore gamer—who ISN’T well-versed in spatial relationships or has accrued years of Tetris-style puzzle game experience, this game, even on Easy, will be a difficult challenge. Demon’s Souls at least had the benefit of relying on traditional gamer skills to ease players through the transition into its legendary difficulty. Catherine doesn’t even benefit from that. Easy level—the default and highly recommended level—at least gives players the ability to “undo” past moves, and gives more checkpoints during the climbs in Nightmare Mode. Normal and Hard remove this much needed crutch and are difficult to the point that only the most stubborn and talented gamers will have the patience to complete them without surrendering to some kind of walkthrough. For those interested in pure gameplay, there are alternate, online modes where competition with one other player is possible as both seek to reach the top of the block mountain.

Catherine is, ultimately, a true Atlus game its heart. Different, daring, important to gaming in some ways, but inaccessible and alienating in others.  But the gameplay is so unapologetically hardcore that only the most skilled or stubborn gamers will get through it.

Catherine begins with a situation that should be uncomfortably familiar to most people in their early 30s. Vincent Brooks, the hero of the game, is in a stable relationship that’s been coasting for years.
REVIEW SCORE
8
File Under: Action, Adventure, Catherine, Horror, PlayStation