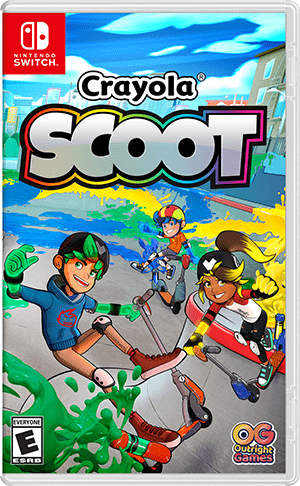 Crayola Scoot is literally Splatoon’s painting mechanic meets Tony Hawk Pro Skater only with scooters, and it mostly works if you’re willing to put in the time to learn the mechanics.

There’s a slew of 48 single-player challenges in the Color Cup across 12 different skateparks and six game types. There isn’t much in the way of a story to be found, or really anything in the way of character development. But I doubt many people are looking for a deep plot when buying a game in the skating genre.

The arcade mode allows up to four players to play in split screen across all the parks and game types from the Color Cup, as well as play as any unlocked characters as well as custom characters.

The character creator here is rather shallow, allowing you to pick a gender, skin colour, and “splat colour” which is basically this games ink in the form of melted crayons. Strangely, this also changes your characters’ arm and hair highlight colours to match. There are around 80 pieces of clothing to unlock consisting of helmets, tops, and bottoms. Unlocking clothing means levelling up by completing events in the Color Cup and defeating the other characters in games of SCOOT (this game’s version of HORSE, where players take turns trying to top each other’s combo scores in 10-second intervals). Once rivals are defeated their clothes and scooter pieces become purchasable in the in-game shop for coins earned in game (no microtransactions here). Scooter pieces change stats, while clothing is purely cosmetic.

The main star of the show, however, is arguably the Color Frenzy gametype. Color Frenzy has you competing against five other characters to perform tricks throughout skate parks which blasts your colour paint in every direction covering ramps, rails, walls and the ground. The end goal here is the same the Turf War gametype from Splatoon, which is having more of your colour down than your opponents at the end of each 2-minute match. Here getting combos don’t seem as important as strategically spreading your paint effectively, as well as activating pads placed around each arena that cause pipes and other objects to release your colour paint.

The other game types aren’t nearly as fun except for maybe Trick Run, which is your basic score-based mode where performing combos causes your score multiplier to go up. There’s also Splat Tag, a gametype which works like infection or zombie modes found in other games, where one player starts as the infected trying to tag and thus recruit the other players to their teams. Splat Tag is fine with friends, but isn’t so much fun to play against the computer as its difficult to tell exactly where they are, even with arrows surrounding your character and pointing in their direction but provides no information in the way of distance.

Crazy Crayons has players racing to giant crayons that spawn on each stage, trying to be the first to collect five in total. This is easily the least fun mode as all you’re doing is skating around the parks as quickly as possible, which doesn’t require tricking or much thought at all.  Lastly is SCOOT, which plays just like HORSE from the Tony Hawk Pro Skater where you have a limited amount of time to make the largest combo possible. SCOOT is another one of those modes that’s just better against friends than AI, but mostly because the AI is pretty inconsistent difficulty wise.

I’ve played all the way through the Color Cup and unlocked every character, and I’ve just found the difficulty here to be inconsistent. The scores the AI will achieve vary wildly not only between stages, but also runs. I’ve seen the top CPU score 20,000 on one attempt of a Trick Run event, only to retry and have them score 30,000. The same can be said for combo scores the CPU get in SCOOT challenges, which sometimes vary wildly. Thankfully, the game seemingly doesn’t give you a reason to complete each event on hard difficulty unless you’re a completionist.

My biggest gripe with Crayola Scoot is that it doesn’t really do a good job explaining its movement and score mechanics other than on a basic level. Like, there is no strategy laid out for you as a guideline, instead, you’re just taught the buttons (boost, grind, kick) and tricking and jumping with the right stick. It took a lot of trial and error before I finally got my ‘skate legs’ back and figured out when it was ideal to boost versus jump and vice versa, and that the fastest and easiest way to higher scores was jumping and quickly pulling tricks while grinding around arenas.

Another complaint is the fact that painting is only really fully utilized in the Color Frenzy game type, as otherwise its purely cosmetic which wouldn’t be a problem if it didn’t often overwhelm your character on screen making it hard to see to land tricks. Thankfully, the game is pretty forgiving about landings as long as you don’t faceplant and your feet are on your scooter when it hits the ground.

While Crayola Scoot’s colourful graphics aren’t anything to write home about, the game does manage to stay at a pretty solid 60 frame per second in handheld mode, even while playing in split-screen co-op. Playing in docked mode isn’t always quite as smooth (from I’m guessing a bump up in resolution) but these minor framerate issues aren’t enough to impact gameplay in any meaningful way.

There’s a bunch of features that I feel like should have been no-brainers that weren’t included here including high score tracking, online multiplayer,  and leaderboards. The soundtrack isn’t annoying or anything, but is certainly forgettable when compared to the licensed soundtracks of the Tony Hawk Pro Skater games. But if you’re like me you’ll just mute the game’s music and fire up a playlist on Spotify with all your favourite tracks from the PSX Tony Hawk titles.

Crayola Scoot is the closest thing I’ve played to a Tony Hawk Pro Skater game in recent years, and nicely combines that series’ mechanics with Splatoon’s for something mostly original (hat tip to Decksplash, RIP) and certainly fun. However, those that aren’t completionists and without friends to play with locally may want to hold off, even at the budget price of $39.99, as the entire game can be completed easily in around three hours, leaving you little reason to keep playing. While a negative, wanting more of something is also a kind of compliment, right?