Life’s a Bore And Then You Die 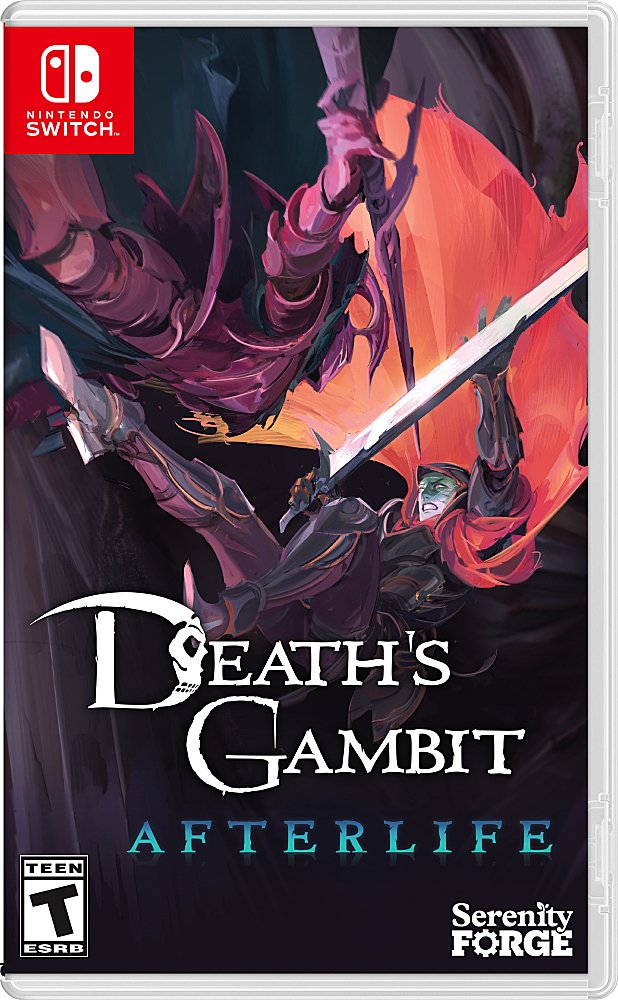 I’ve long held the belief that calling a game a “derivative” of another, is a bit of a meaningless criticism. Imitation is the sincerest form of flattery after all, and what is the game industry, if not people copying each-other’s ideas? Without Super Mario, we’d never have Sonic the Hedgehog; without The Legend of Zelda, we’d never have Darksiders; and without The Binding of Isaac, we’d never have…well 90% of the content on Steam.

I bring this up, because it was something I reflected on while playing Death’s Gambit: Afterlife—which is somewhat derivative of Salt and Sanctuary, which itself was derivative of Dark Souls. Despite being a genuinely good game, as much as I played it, I couldn’t seem to get into it, which seemed strange since it was clearly inspired by two games I genuinely love.

The first thing that put me off about Death’s Gambit: Afterlife, was how it starts. It’s your fairly traditional Souls-story—an ancient source of immortality, a bunch of people fighting over it, battles between mortal men and long-forgotten gods; et cetera, et cetera. You play as a soldier named Sorun who was killed in one of the expeditions for the Source—but then the game had to go in some completely unnecessary directions that really made me hate it right away.

For starters, while the prologue introduces the backstory and character of Sorun, for whatever reason, it also makes a point to break the fourth wall; as a figure resembling death, explicitly offers the player a fragment of Sorun’s soul, and asks them to “guide him through the darkness.” After the title screen appears, and you launch the game, for whatever reason, the game makes a point to start with a DOS boot-screen, before Death starts getting you set up with your character choices in a very casual, modern way of speaking.

“The first thing that put me off about Death’s Gambit: Afterlife, was how it starts.”

It just seemed so pointlessly unnecessary. Why establish all these worthless ideas, like acknowledging the player outside the game, when it really doesn’t seem like that’s going to be thematic going forward? If you want to be Dark Souls, just BE Dark Souls. It set a really strange tone and I genuinely wasn’t interested in seeing the story through to the end.

Gameplay in Death’s Gambit is fairly similar to that of Salt and Sanctuary—or, like every Souls-like game ever. What separates this from most others, though, is how it plays more like a traditional RPG, as players choose their class at the start of the game and gain access to unique abilities and skill trees as they progress. It’s an interesting take on this kind of gameplay, adding a unique layer of gameplay to the Souls-like genre—which is usually built around character building and weapon optimization.

“Gameplay in Death’s Gambit is fairly similar to that of Salt and Sanctuary—or, like every Souls-like game ever.”

Visually, Death’s Gambit: Afterlife is kind of mixed. While it has a nice 16-bit style, with excellent level-design and background visuals; it doesn’t fully commit to the aesthetic, utilizing the “paper-doll” animations for limb movement—think Black Knight Sword. Audio is also a bit of a mixed bag; while it’s generally got a great soundtrack and solid sound effects, some audio balancing is a bit weird, coupled with some of the more whimsical area themes, which makes the game feel a bit off-balance.

But where Death’s Gambit: Afterlife falls apart, for me anyway, is that it’s just boring. That’s not to be confused with bad, because it definitely isn’t, but there really isn’t anything about it that made me want to keep playing it, or ever return to it—not when I would sooner go back to Bloodborne for the 19th time. It just looks and plays too much like other games before it, without anything wholly unique to separate it from the rest.

Maybe you’ll find something in Death’s Gambit: Afterlife that I just couldn’t. It’s got all the bones for a solid game, and its quality is on display—but if you’ve got the chance to play either Dark Souls, or Bloodborne in particular, you’d probably have more fun there.

I cannot deny that Death’s Gambit Afterlife is a well made, well executed game, but it genuinely isn’t for me.
REVIEW SCORE
7
Buy On Amazon
File Under: Nintendo Switch, Switch