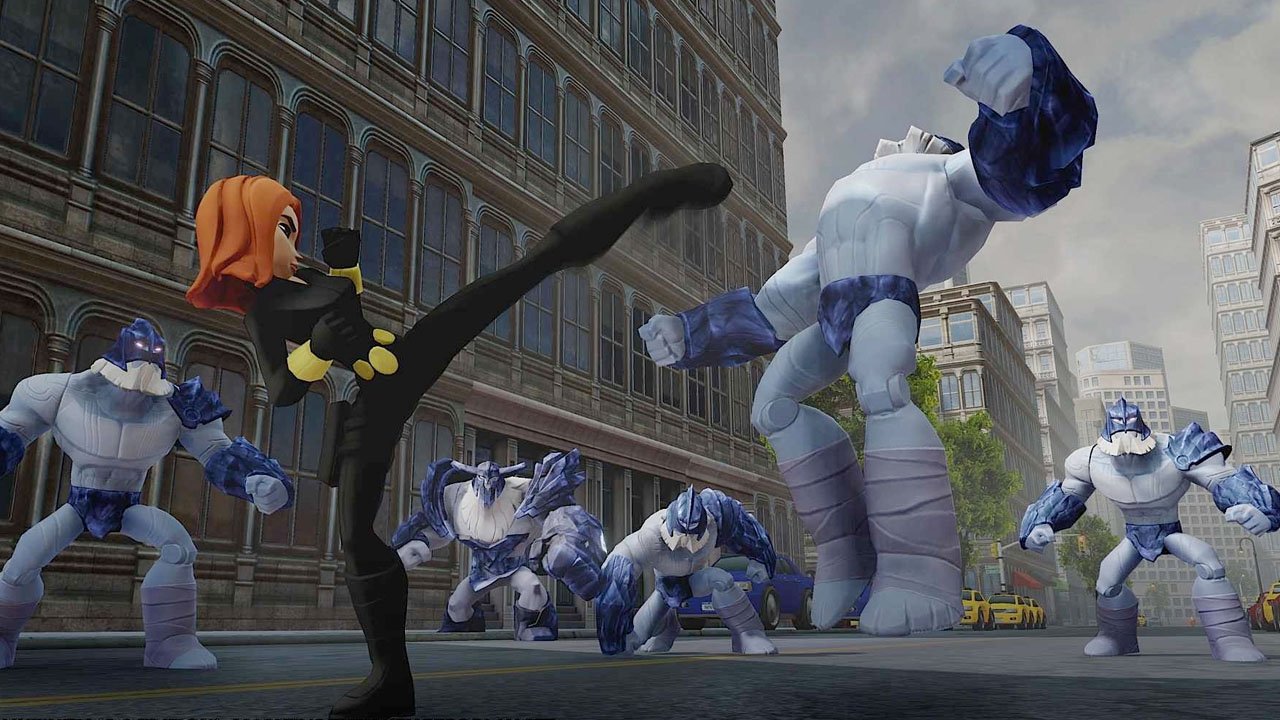 Disney is a company that normally invokes imagery of singing princesses accompanied by adorable animals, not superheroes blasting through frosty enemies. Well in Disney Infinity 2.0  Marvel Super Heroes, players are able to merge both worlds. For those unfamiliar with the Disney Infinity series, it is a toy-to-life title, where the player places figures on a base which will import them into the game much like the Skylanders series.

Straight out of the starter pack I plopped Iron Man onto the portal and booted up Disney Infinity 2.0 Marvel Super Heroes with excitement. I played and adored Disney Infinity and couldn’t wait to try out the next generation of Infinity. The starter pack includes three figures(Iron Man, Black Widow and Thor) much like the first Disney Infinity starter pack, however unlike the original DI these figures do not come with different Play Sets(campaigns). Right out the box you get one campaign which already seems like a step backwards from the first game which offered three, and this one Avengers campaign feels very similar to the Incredibles campaign from the original Disney Infinity, except with a lack of comedy and downpour of Frost Giants.

The campaign focuses on one objective, save the world from the Frost Giants who are working with Loki and MODOK to rebuild the Casket of Ancient Winters. There isn’t much variety in the types of missions offered to players, and all of them include killing Frost Giants.

While I was killing Frost Giants I found myself frustrated with the camera. It has a tendency to take on horrible angles which either cannot be rotated due to tight spaces, or must be manually rotated which usually rotates back into a horrible position a second later. This makes fighting larger groups of Frost Giants and boss battles irritating. Trying to roll out of the way of being hit while trying to ensure a decent camera angle is difficult for even experienced gamers. Where’d he go, is he behind me?

Disney Infinity Marvel Super Heroes fixed many of the clipping errors found in the original DI, I no longer move through walls, but it still lacks that “next gen” feel. I understand wanting to keep a toy-like aesthetic and even though the buildings are more detailed than the PS3 original, it doesn’t feel like they made full use of the graphic capabilities of the PS4. Most of the game moves fluidly however when loading the city the load times are lengthy and the game has a habit of speaking over itself. I often found NPCs speaking over each other or while my character was speaking. I’m sorry I can’t hear you, you want me to kill what? Oh Frost Giants.

Another new addition are skill trees. The addition of skill trees adds a nice layer of depth in customization. Extra health, new abilities and skills are all possible with the trees and skill trees do not only apply to the figures created for Disney Infinity 2.0. All figures from the original DI have been upgraded with the ability to have their own skill trees when brought into the Toy Box.

There is an advantage to having all the starter pack figures share a Play Set, unlike the original DI, you can now play two players without having to purchase extra figures. Having player two jump in and out of game is as easy as choosing your figure and pushing a button, making it ideal for households with more than one player. Co-op play usually functions well, however when locked in battle with your foes players will find their co-op partners can become a problem due to friendly fire.

With all the repetitive gameplay, underwhelming personality of characters and the frosty graphics, I was left feeling out in the cold. Maybe I should join the Frost Giants.

There’s toys in my box!

The Disney Infinity 2.0 Toy Box is really where DI 2.0 shines. Toy Box is a free-for-all “sandbox mode” where players can build anything their creative minds desire using the tools provided, like Minecraft but with a Disney flare. Toy Box pieces can be unlocked in Play Sets or purchased with the in-game currency. Players can start in a completely blank Toy Box or build on a preset Toy Box. Although the possibilities are endless in the Toy Box, the best part is you can play with any of the Disney Infinity figures that have been released including the figures from the original DI. Did I amuse myself by sneaking up on Iron Man with Sulley trying to startle him by unleashing my ferocious scare? You bet your sparks I did.

There are also Toy Box Game discs. These discs allow players to play whole new games instantly. The starter pack comes with Assault on Asgard, a tower defense game with multiple levels. These games offer a great break while playing through the Avengers Play Set.

To read Melanie’s extended review, check out the Oct 2014 issue of CGM.

Straight out of the starter pack I plopped Iron Man onto the portal and booted up Disney Infinity 2.0 Marvel Super Heroes with excitement.