The Earth Defense Force games are divisive titles. Some insist they’re trashy garbage of the lowest caliber. Others swear that they’re some of the most fun you can have with a game, if you’re open to the experience. Honestly, both camps are right. Sandlot’s cult franchise is indeed some grade-A trash, but it’s the kind of trash that’s campy and silly in all the right ways. Earth Defense Force 4.1 shows that the pedigreed developer has no intention of changing its approach, either.

Which isn’t to say that this newest title is not a marked improvement over previous entries. It very much is, actually. It’s just that Earth Defense Force 4.1 definitely falls under the “if it ain’t broke, don’t fix it” classification. You still choose from a set of classes, pick from an increasingly ridiculous arsenal, then go blow giant bugs and flying saucers to smithereens. Not much has changed on that front, and I wouldn’t really have it any other way. 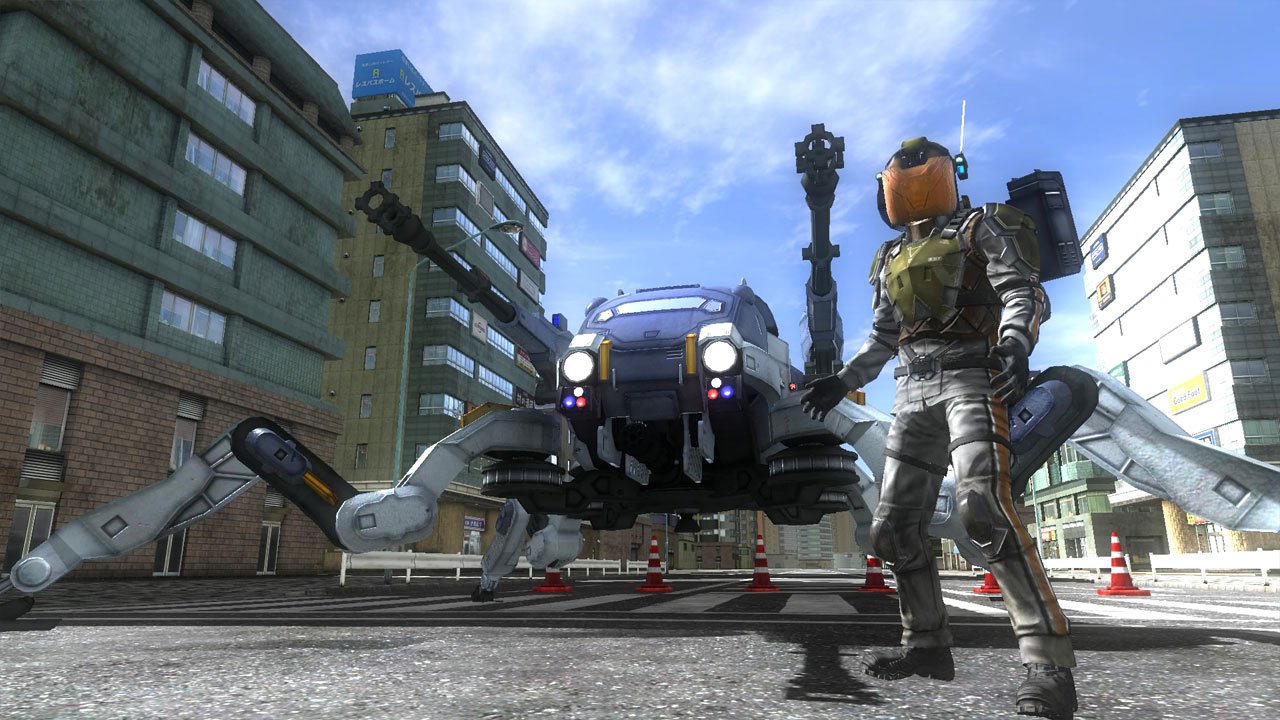 It’s in the small tweaks that 4.1 shows the most progress. For starters, the infamous framerate slowdowns are now all but fixed. Even the most hectic sequences run at or above a consistent 30-ish FPS, which is a godsend. This holds true even for the split-screen mode, which this port still supports. A good thing too, considering that I still consider that the definitive way to play an EDF title. Online mode is great for people who can’t partake, but nothing beats levelling cities next to your buddy or significant other.

Speaking of levelling cities, Earth Defense Force 4.1 makes it easier and more rewarding than ever to do so. By starting on “Hard” mode, players will have almost immediate access to crazy powerful and destructive weapons. Delayed ricocheting grenade launchers, earth-shattering plasma launchers, non-stop laser beams – if you can imagine it, this game has it. Diligently collecting loot each level reaps you amazing rewards, and the best part is that your co-op guest will always have access to whatever you’ve unlocked.

A good thing, too, because unlike some previous entries in the Earth Defense Force franchise, this one throws you in headfirst. Within the first set of levels, you’ll get introduced to ants, two types of spiders, and a few different types of flying craft. While 4.1 still has the wealth of content I’ve come to expect from the franchise, there’s not a lot of front-end padding, unlike the EDF 2 re-release on the Vita. Before you know it, you’ll get thrown into the mech and kaiju battles. But with the frontloaded onslaught of weaponry, not to mention the improved and smoother controls, you’ll feel in control at all times. Well, unless you get lost in a stampede of ants – a common occurrence.

As far as ports go, this one fits the bill pretty nicely. It sports all the features of the PS4 version, with some additional resolution and aliasing options. Mouse and keyboard control schemes work just fine, but I’d still recommend playing with a traditional controller, considering it’s how the game was intended to be played. I did have some serious crashing issues while trying to tweak some of the settings, but virtually nobody else had the same problems, making me think it’s just my rig. All-in-all, it’s a respectable if a little barebones version of the game, on-par with what you’d get on the PS4.

Earth Defense Force 4.1 is the kind of game I can’t find a lot of fault with. It’s easy to pick up and play. There’s a ton of content. The campaign is fun solo or with a co-op partner. Sandlot’s produced another stellar work of crass, cheesy camp, with plenty to love. It’s hard to describe how satisfying levelling a skyscraper or dropping a bomb on a swarm of giant insects is. Simply put? It works, it’s fun, and there’s a lot of it to go around.

I can’t think of much else I want from a game, personally.