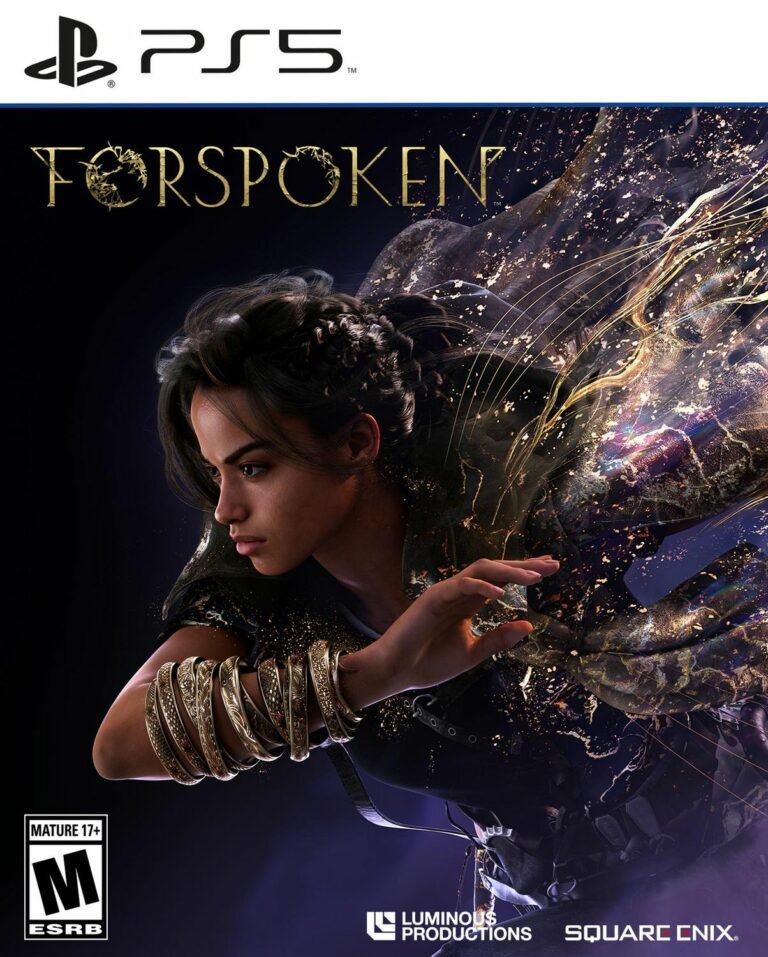 Forspoken is a refreshingly stylish take on the open-world engine, though its slow-boil opening hours demand patience and investment upfront.

While I had reservations with several storytelling and design decisions made in Final Fantasy XV, the highlight of the game was its combat—a fluid and dynamic engine, unlike the rest of the series that saw the protagonist, Noctis, warping around open battlefields. Given that experience, Forspoken immediately caught my interest with the prospect of a properly narrative-driven game utilizing the essence of that engine (but leaving the auto-travelling car behind).

Forspoken puts players in the white sneakers of Frey Holland, an orphan living on the streets of New York who is whisked away to another world when she happens upon a sentient artifact, an armband she dubs Cuff. This new world, Athia, is no picnic compared to ours; Frey finds a civilization beset by a magical plague, the Break, that kills or corrupts those who are exposed to it, and their four rulers are missing-in-action, at best. With Cuff’s powers and her own immunity to the Break, Frey sets out for answers, a way home, and eventually, vengeance.

The story—helmed by an all-star team including Gary Whitta (Rogue One) and Amy Hennig (Uncharted)—admittedly takes a little bit to get going, using the real world for some early tutorials as Frey’s background is established. After that awkward acclimatization stage, however, Forspoken brings the emotional punches and lights a fire under our heroine.

Frey carries the weight of the game on her shoulders as the playable protagonist, and fortunately, I found her to be an interesting and nuanced character (more than the memeified trailer clips suggested). Her motivations and reactions are complex, and she inspires an empathetic connection thanks to Ella Balinski’s enthusiastic performance.

Her constant counterpart is Cuff (Jonathan Cake), who chimes in to offer guidance or sarcasm in equal measure. Their relationship is more two-dimensional than pre-release footage (or even the poorly contextualized demo) might have suggested. I was immediately invested in discovering the mystery behind his peculiar circumstances and their unlikely partnership.

Most of the main cast have similarly strong performances. Janina Gavankar (Star Wars Battlefront II), Claudia Black (Dragon Age: Origins), and Polyanna Mcintosh (The Walking Dead) were amazing choices to play the Tantas, the mythical rulers of Athia; if anything, I could have used more involvement from them.

Of course, players will spend most of their time with Frey and Cuff in Forspoken‘s open world, with only each other to speak to. In-game banter has been cited as a sticking point for other triple-A titles as of late, like Horizon Forbidden West and God of War Ragnarök, and from the trailers, I know this was a concern for many people heading into this game as well.

For the most part, I actually found the incidental dialogue to be pretty well-balanced. Play any game like this for long enough and certain voice clips will get seared into your memory, but it took quite a while for Forspoken’s banter to really loop hard.

When I had a definitive narrative goal before me, Frey and Cuff were more focused—as though they were realistically and understandably dwelling on a herculean task before them. Once I passed that particular mission, however, and began taking my time exploring instead of running back to the main town as the game expected, the more stereotypical quips and one-liners became more prominent. (This may have also highlighted the game’s sometimes-charming, sometimes-exhausting overreliance on F- and S-bombs.)

And boy, did I want to keep exploring. Like the story, Forspoken’s open-world navigation via “magic parkour” needs a little time to get going. With some practice, however, it becomes an exhilarating method of transit. At the start, Frey can run almost as though she’s ice-skating on regular ground, and use the same technique to charge up walls and cliffs. The joy of mastering this mechanic compounds as she gains more traversal abilities, like the “shimmy” that boosts her momentum if she jumps as soon as she touches the ground, or a swinging grapple reminiscent of Spider-Man web-slinging.

Her magical combat abilities are similarly scaffolded. Forspoken starts with a single school of magic which grants Frey projectile earth attacks; she can charge a large burst, use rapid-fire clusters, or summon a shield to punish foes who get too close. Attack skills are handled with the right trigger, while a more diverse array of support spells are called with the left. These include a massive whip of vines that drains health from enemies and summoning a stationary plant to attack enemies. Using magic charges a surge attack, called by pulling both triggers.

Obviously, this initial skillset demands that Frey, a regular and virtually unarmoured human, should keep her distance from foes. When enemies and projectiles do close in, Cuff steps in to protect her automatically go and mitigates damage; should he get overwhelmed, however, Frey will be vulnerable while he recovers, and that’s where the risk of a Game Over sets in. Balancing stamina use to parkour away from harm in the first place and staying mobile is key.

Directly aiming spells accurately took some practice, and could have used a more reliable auto-targeting function; at one point I was wondering who was to blame for my targeting woes, the game or my controller. Once I had a handle on it, though, the control scheme brought back the best vibes of Final Fantasy XV, with Frey maneuvering around the field in a way that would make Noctis proud. Luminous Productions has breathed new life into their engine and created an invigoratingly acrobatic change of pace for open-world combat and exploration.

After about an hour of experimentation, I was steeped in the mechanics enough to really enjoy myself, and taking on the first optional “Locked Labyrinth” gauntlet really solidified my grasp on Forspoken’s engine. Athia is a simply massive world that’s a joy to navigate, peppered with encounters and points-of-interest in a natural, balanced way. Though “barren wasteland” is its default aesthetic, the Break’s influence has warped vast regions into bleak, Lovecraftian mutations that revitalize the visual experience.

I was taken aback by the scale of it during my quest to the domicile of Tanta Sila (Gavankar). The world map kept revealing new segments with a diverse array of landmarks along the way, new landscapes to traverse and (for the most part) rewarding optional challenges. Between the feel of mastering the magic-enhanced parkour and the distribution of landmarks, I don’t think I’ve enjoyed navigating an open world this much since The Legend of Zelda: Breath of the Wild.

When you’re not in the wilds of Athia, you’ll often be exploring the streets of Cippal, humanity’s last fleeting bastion of safety from the Break. The game shines brighter in the open world, but the hub town is an important—if less stimulating—element in its own right, a reminder of what Frey is fighting for beyond a way home.

There are robust development systems beneath Forspoken’s hood. Frey’s gear can be upgraded and customized with relative freedom, and she can craft at practically any time if she has the resources. Each of the learnable spells on her wide-reaching skill trees can be enhanced if certain challenges are fulfilled, adding incentive to experiment with all of the tools at her disposal. These RPG elements really bolstered the gameplay in a satisfying way.

Tying all of Forspoken’s elements together is the score, overseen by Game Award-winner Bear McCreary and Garry Schyman. Its main themes are used with haunting effect at times, while the fighting themes keep the blood and adrenaline pumping. The overall auditory ambience is a perfect fit, and one of the most flawless departments of the production.

The visual effects shine, as in the way Frey’s original Surge Magic spells builds the longer the buttons are held to summon it, materializing into a gnarled mass of roots that then scatters into magical ash and lingers long after the attack. Your personal mileage for such particle effects may vary, but overall Forspoken is starting to tap into the potential of the PS5—loading sprawling and complex vistas with ease, and shifting gears nigh-seamlessly.

I went into the final product with a clean slate and an open mind, and really enjoyed my time in Forspoken. That’s not to say it’s perfect; it’s far from it. I can see things that didn’t deter my enjoyment that will irritate other players, like the banter. The controls could be smoother at times, the pacing is imbalanced early on—sometimes literally, shoving you into the menu to look at a dialogue or pausing as characters position themselves for a cutscene. As I’ve mentioned at various points in this review, many elements require acclimatization. It’s got a learning curve, not unlike the challenges a regular girl from New York would face when thrust into a strange fantasy world.

Story-wise, and without spoilers, the upfront pacing issues reappear later on and some of the shine comes off the apple. Balancing plot and play experience is a fine art with open-world games, and the back quarter of the main story may leave many players wanting—though the postgame appears satisfying.

Was that acclimatization worth it? I would say so. Forspoken‘s gameplay dares to shake up the conventions of a genre that’s starting to grow stale for many and feels fresh and original for that alone. While it may not reinvent the narrative wheel in the big picture, I felt it succeeded in powerful character moments if nothing else, crafting a heroine who has depth and conviction outside of the requisite (and attention-stealing) battle quips. It’s a smooth and stylish experience once you get engrossed, and better enjoyed in its full context—but slow pacing and awkward first impressions might turn players off.

Forspoken feels like a breath of fresh air for open-world adventures with its stylish engine, but is held back by pacing and other foibles.
REVIEW SCORE
8.5
Buy On Amazon
File Under: Forspoken, RPG, Square Enix