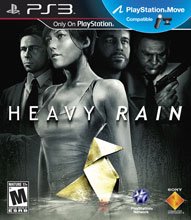 Heavy Rain is going to provoke discussion. There will be arguments about what kind of game it is; there will be arguments about whether or not it is even a game at all. Some people will call it a movie, others will call it an evolution of the adventure genre, some will love it, some will hate it, some will “get it”, and others simply won’t. It’s probably one of the most interesting games of the current generation, if for no other reason than it engages debate about the medium and its audience, and does things no other game has attempted like asking players bear the consequences of their action

Right off the bat, Heavy Rain’s graphics establish their animators as serious contributors to the current generation of gaming. The art direction is beautiful, moody, and startlingly evocative, and it boasts the best facial capture and character detail seen in any available game. The graphics are slightly let down by technical problems, such as frequent screen tearing, but on a purely aesthetic level, Heavy Rain easily competes with other high profile title

Unfortunately, the audio is not quite up to the same standard. While the soundtrack could also be considered one of the best on the market, the voice acting is uneven, with an unpredictable mix of performance While not an issue with most games, it’s a noticeable flaw in Heavy Rain, where narrative immersion is absolutely critical to the experience. Despite taking place in Philadelphia in 2011, only one of the actors sound like a legitimate American. Based out of Paris, Quantic Dream probably had budgetary limitations that forced them to work with European talent to mimic American accents, but it’s still a minor blemish on the game.

It’s still too early to say whether Heavy Rain is going to be simply another speed bump on the long road to gaming’s emergence as an artistic medium, or actually become a milestone. But one thing is certain, and that is gamers have never played anything quite like thi It may not be for everyone, but everyone should try it at least once. The adventure genre has reinvented itself and it is grimmer, darker, more emotional and more sophisticated than anyone was expecting.

Heavy Rain takes many chances, calling itself an “Interactive Drama,” which, while a bit clunky, is still the most accurate description of what the game attempts to do.
REVIEW SCORE
9
File Under: PlayStation, RPG