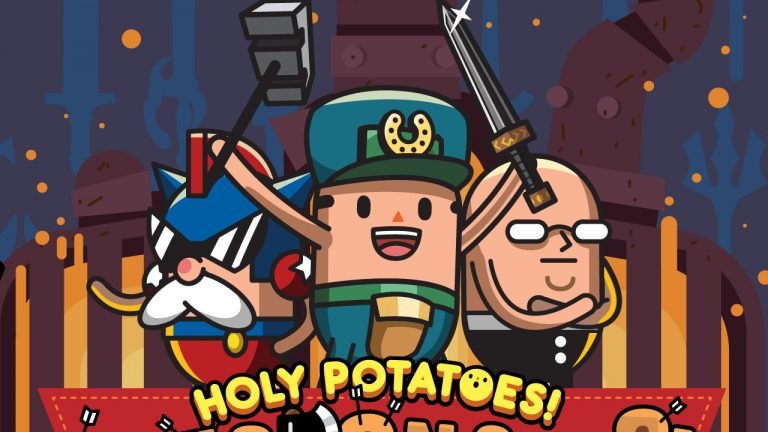 Simulation games can lose their novelty pretty quickly and need something to grab an audience. Vehicle, people, and animal simulators have been overdone, and with the amount of tycoon games out there, the market looks pretty saturated. Holy Potatoes! A Weapon Shop?! has something others don’t: potatoes. What it does have in common with other simulators, is that it didn’t live up to its po-tot-tial, and needs a bit of work done to reach it.

The simulator revolves around potatoes forging weapons, exploring worlds to collect items, and selling weapons to heroes, villains, and monsters. It acts kind of like an insight on what NPCs do when no one’s watching. Aside from the fact that the majority of the potatoes are based on video game characters and celebrities, the game itself is pretty creative. There are worlds like the miso-soup swamp and the root beer tower, a wide range of materials to use in forging, and a number of different weapons to make. It’s all in a cute hand drawn style that brings the player in.
Like any other simulator, it’s easy to slip into a trance and get caught up in it. Forge weapons, explore to get more materials, research, buy remaining materials needed, sell. Wash, rinse, repeat. However, despite all the tasks at hand, running a weapon shop should be harder than it seems. The game is very easy to succeed in because of the lack of challenge.

Unless you’re working on contract work or making a quick buck to pay your employees, there’s no real deadline for making weapons. Weapon forging is free, so even if you’re in debt you won’t have to rely on contracts. Random chance doesn’t play much of a significant role either. While it can affect employees and weapon making for better or for worse, the range of affecting stats is multiplied to between x0.9 and x2.4, and are pretty repetitive. After a while of going through all the questions, the 50/50 chance doesn’t become so risky anymore if you remember them. The same goes for seasons and shop upgrades: they affect employees, but not significantly.

There are three speeds included for when completing tasks (in rabbit holes, I may add) take a long time and you don’t want to wait, but unfortunately, there isn’t a pause button. Despite that, the biggest downside was the save bug. Sure, there are always going to be bugs in games, particularly ones made by smaller indie companies, but after spending two hours exploring, researching, and upgrading, I came back to find myself in year one. I lost all my data up to that point. The issue has since been dealt with, but it’s still a major disappointment.

Generally, the game is full of jokes and pop culture references as mentioned before, and serves mostly as a fan service. The cute graphics, music, and humour with the potato twist is really what gave it such hype, but the actual gameplay makes or breaks it for the individual player. While it does provide a fun experience, the slow pace and easy gameplay prove this game would be much better on mobile devices.
If there was more of a challenge like deadlines, random events having more of an effect, and generally broadening the range of difficulty through different aspects to give it more of a challenge, it could be a spud-tacular game.

If there was more of a challenge like deadlines, random events having more of an effect, and generally broadening the range of difficulty through different aspects to give it more of a challenge, it could be a spud-tacular game.
REVIEW SCORE
6.5
File Under: Indie Game