When Robots Ruled The Earth
SCORE: 8/10 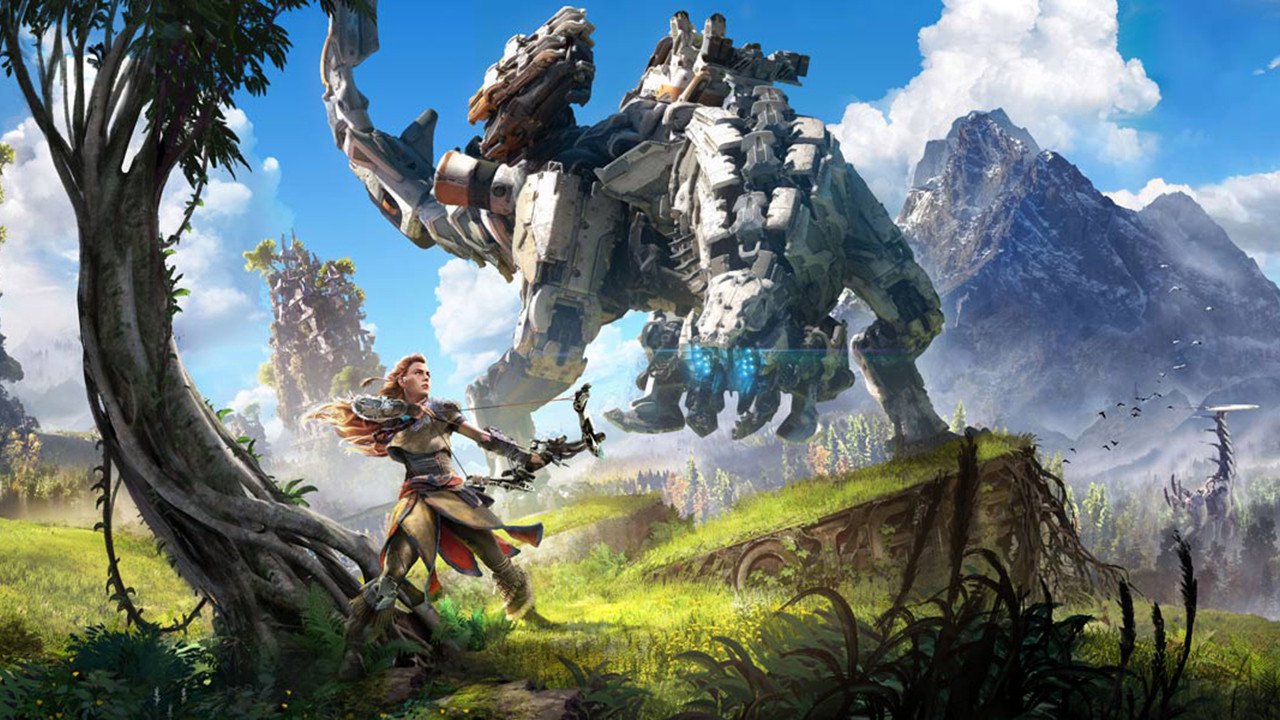 Horizon Zero Dawn, one of PlayStation 4’s best-selling exclusives has landed on PC. That feels great to write because a whole new audience is going to be able to experience one of the defining games of this console generation for PlayStation users. Microsoft has been embracing the PC ecosystem for sometime now, bringing their exclusives day-and-date to PC and getting their games into the hands of as many players possible, while Sony has been keeping their games close to the chest. Thankfully, the vault is beginning to open up and Guerilla Games’ latest franchise is set to take stage and leave a lasting impression on PC players with its hard-hitting story and mesmerizing open world.

For people jumping into Horizon Zero Dawn for the first time on PC, the game’s open-world is set in the far post-apocalyptic future where humanity’s modern civilizations have fallen to ruin and sentient robotic wildlife now roams the land at the top of the food chain. Players take the role of Aloy, a brave young girl and an outcast of the local Nora tribe. Once she proves her worth as a warrior in the annual ceremony known as “The Proving”, Aloy sets out on her journey as a seeker, ready to uncover the truth behind how the world became overrun with robotic creatures and to defeat the impending threat of a new sinister faction who are corrupting machines and using them as weapons against the remaining human population. Once this main campaign is complete, Players can also jump into The Frozen Wilds expansion for even more story content and a new suite of weapons to obtain and robots to hunt.

While the exploration and activities of Horizon’s open-world are fairly generic fare for the genre, the true hallmark of the game that kept me enthralled to the end is the combat against its wide range of robotic wildlife. Aloy plays like a tactical hunter, using her vast arsenal of ranged weapons and craftable ammunition to identify and exploit target weaknesses she finds in her prey. Mechanical beasts weak to fire burst into flames as you ignite them with fire arrows, the towering behemoths that can crush you with a single blow can be brought down with tripwires or temporarily immobilized in place, and you can even break off their weapons or disable their most powerful attacks by targeting their exposed systems with a volley of well-placed shots. Horizon has a great sandbox of weapons for Aloy to utilize and it’s a lot of fun to experiment with different status effects and types of equipment to find the optimal way of taking down the world’s most fearsome creatures. Outside of the action-oriented combat, players can also utilize stealth to their advantage by hiding in bushes and using sneak attacks to potentially one-shot Aloy’s foes or by setting traps along the machine’s path to exploit their elemental weaknesses before Aloy jumps into the fight.

Graphically, Horizon Zero Dawn’s lush environments and stellar art direction still pop out as one of the most unique visual open worlds to date. The mix of run-down and overgrown modern architecture paired in contrast with the futuristic robotic wildlife was a true sight to behold back in 2017 on a base PlayStation 4, but now the new enhancements brought to the 2020 PC version elevates that graphical fidelity even further. While the primary models and robots are left untouched from their 2017 launch, PC players can enhance Horizon Zero Dawn’s with higher quality reflections, shadows and textures to bring out even more detail in its already rich open world. The game also now has support for ultra-wide displays, resolutions up to 4K, and of course, unlocked framerates.

However, Horizon Zero Dawn’s pc port hasn’t exactly been the smoothest experience I’ve had on the platform thus far. At first, no matter which preset of graphics I landed on, Horizon was a stuttering mess and the framerate would never hold stable in either its open-world or densely packed cities, regularly jumping from 70-50 FPS and even a 1% low of 5 FPS if the game was trying to load in assets while I was playing in Meridian City at 1080p. Playing off an RTX 2080 Super and a Ryzen 7 3800X on Nvidia’s Game Ready drivers for Horizon, this level of performance just feels off, especially when compared to the smoothness of Death Stranding’s PC port, which is running off the same game engine. Thankfully, I was able to improve the experience quite a bit after messing with various settings in the Nvidia control panel. After enabling Ultra Low Latency, setting the power management mode to prefer max performance, and setting texture filtering quality to high performance, I was able to reduce the constant stuttering quite a bit and land on an average of 91 FPS in the games benchmark tool with only a 1% low of 33 FPS. Before these settings, Horizon was only able to hit an average of 76 FPS off my hardware and hit a 1% low of 5 FPS.

As of writing this review, a day one patch for Horizon Zero Dawn’s pc port is now set to release when the game goes live on Thursday, addressing the optimization and stability issues reviewers ran into with the game. I will be updating this review when that patch goes live to see if I can get any more performance out of the game on my hardware, to see if the stuttering issues that I regularly ran into are gone, and to give the game a final score. If the stuttering does persist though, I recommend readers with Nvidia GPUs try out my settings above until the game receives further updates. It should be noted I also tried rolling back the drivers to a previous version as well, but quickly encountered even worse stuttering and visual glitches, rendering the game unplayable. Sadly, I can’t recommend any similar settings for AMD GPU users to try out, but I can tell you that the company is working on new drivers for the game at launch.

My review process with Horizon Zero Dawn was definitely not the intended experience the devs had for the public on release, but it’s the one I have to share with you once this embargo lifts. While the port was quite unstable for me until I was able to land on a better settings profile, I still enjoyed my time with game quite a bit. Horizon as a whole feels like a very by-the-books open-world action game with how much generic side content and activities there are for players to experience, but the game’s captivating environments, awesome combat, and thrilling main story carry the experience on its shoulders and still make Horizon Zero Dawn a worthwhile game to play on PC. I’m looking forward to seeing how the game further performs with the upcoming day one patch, as well as seeing how Aloy continues to evolve as a character in the upcoming sequel, Horizon Forbidden West.

Update: The day 1 patch for Horizon Zero Dawn is now live for reviewers, but does not address the issues I’ve experienced in this review. Stuttering, anisotropic filtering, 30 FPS animations during cutscenes, and crashes during the game’s opening shader compilation process are all regarded as known issues that will be investigated and addressed in the game’s later updates by the developer.