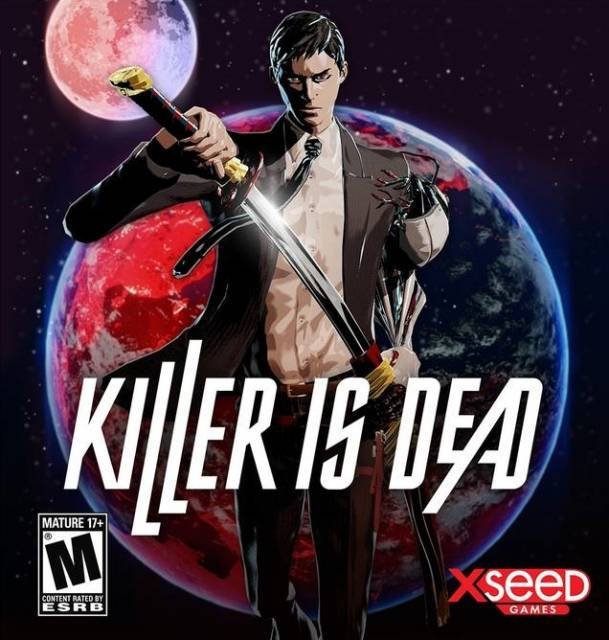 There’s a particular experience in gaming that can be had only by those with a high tolerance for sloppy game design in order to embrace a bizarre, surreal atmosphere as conceived by Japanese game developers. Most recently, Swery65, was the poster boy for this trend with Deadly Premonition garnering praise and hate alike, but before Swery65, there was Suda51. And he’s back with Killer Is Dead. This game is a return to form, for the developer, which may be a good thing or a horrible thing depending on how long you’ve been a fan of his work.

Fly Me To The Moon

Killer Is Dead has obvious inspiration from episodic anime that is native to its homeland of Japan. This is the story of Mondo Zappa, a man with a cybernetic left arm, a katana, and an assistant named Mika. He works for a government group that takes on execution jobs for various clients. Every “episode” in the game is a new job or plot development, with the game taking on the classic structure of anime such as Mushi-Shi or Cowboy Bebop in which episodes are largely self-contained with a few links here and there to an overarching story that finally resolves at the end. Of course, this being a Suda51 game, this story is anything but straightforward, and it’s quite likely that only studious note taking, analysis and discussion amongst a group will piece together any kind of comprehensible plot. Mondo, unlike past Suda51 characters like Travis Touchdown or Juliet, is not a light hearted, chatty sort, taking an approach in both tone and presentation similar to the schizophrenic Killer 7 that was released on the PS2 way back in 2005. There is a wily, unpredictable and often legitimately surreal bent to the proceedings that put Suda51 firmly in the auteur category as it’s unlikely that anyone but him could come up with the bizarre, random imagery and events that play out in Killer Is Dead. This has all the hallmarks we’ve come to expect from him, including an attitude towards women that some will find cheeky and playful while others will be offended. So while the story won’t be to everyone’s liking—or comprehension—it’s a unique experience.

The Atmosphere’s The Thing

The thing that needs to be understood when playing a Suda51 (or Swery65) game is that appeal isn’t in the systems. Gamers that enjoy the tight third person combat found in games like God of War or Devil May Cry have come to the wrong party and should just turn around and walk out the door again. By no stretch of the imagination is Killer Is Dead an amazing action game. At best, the combat system is competent.

The basic concepts of the main game are familiar. After taking an assignment in a new episode, Mondo is cut loose in a new environment where enemies spawn and make a beeline for combat. Combat itself is the traditional third person melee type, this time with a katana, supplemented by some ranged attacks from Mondo’s cybernetic arm, which shoot bullets, turn into a drill, or charge up for a powerful laser blast. There’s also a “blood meter” that builds up as Mondo executes combos without getting injured, and when it maxes out, Mondo goes into a hyper mode where he does more damage faster, and can execute enemies with finishing moves (selected by the face buttons) that yield different rewards.

First, there are the technical considerations. The feel of the combat, from the controls to the camera, is just not as tight or as polished as those other action games I mentioned. Mondo is no Dante or Kratos, and certainly no Batman. He has a limited range of attacks, confined largely to the Square/X button on the controller, with a few stick moves to juggle or do area of effect attacks. None of this is terrible, but shoddy camera work combined with loose controls and limited combo sets will put off a certain kind of action game fan, especially when combined with the limited spectrum of enemies to fight.

The real focus of the combat here is not combos, but parries and dodges. Mondo has a dodge “reward” similar to the “Witch Time” of Bayonetta, wherein a successful, last minute dodge slows down time and allows Mondo to rush in and get a flurry of hits. He also gets bonuses to attack when he uses the “Just Guard” which is similar in that it’s a timed parry rather than dodge, leaving enemies open to more hits. This adds a bit of lively variety to the combat, although it still can’t completely compensate for the generally limited options in combat and mobility compared to top tier games within the genre.

Then of course, there’s “Gigolo Mode” which is another storm of controversy in the same way that Dragon’s Crown has been making the rounds about the misogynistic tendencies of the Japanese game development culture. Gigolo Mode tasks Mondo with hanging out with a girl, staring at her using “Gigolo vision” and taking quick peeks at her womanly virtues in order to build up courage for giving gifts. Once enough gifts are given, Mondo takes the girl to bed (not a whole lot is shown) and receives new weapons as a token of thanks, though eventually these turn into just more materials for upgrading. This has proven upsetting to some, and again, it’s going to be a divisive issue amongst gamers. Steadfast upholders of political correctness will find one more piece of ammunition to use in their arguments. Personally I wouldn’t say the game is misogynistic myself, though certainly some sex objectification is going on, albeit playfully. Perhaps it’s more accurate to say the attitude towards women here are more old fashioned, reminiscent of the 80s, when attractive women were more openly valued based entirely on their appearance. It’s certainly not hateful towards women; it’s just not giving them much credit beyond their looks.

The real reason to play a Suda51 game is for the entire experience. The cut scenes, the surreal plotting, the randomness, and the references to everything from Audrey Hepburn to Thomas the Tank Engine along with unexpected musings on existence rammed in at the most inappropriate places. This is a dark, brooding, surreal game like Suda51 hasn’t done since his Killer 7 days, and while it still has moments of comedy and leering “ecchi” moments, it also has some inspired boss fights and extra game challenges like an arena with specific missions for people looking for a more focused gaming experience. It’s all in there, just not brilliantly polished to a perfect, playable sheen.

Killer Is Dead is a game I would recommend to people looking for something different. If you’re hung up on making sure you get your money’s worth from a polished, AAA experience, this isn’t it. However, if you’re someone that’s always on the lookout for something unique, memorable, and challenging from a perception—rather than twitch—perspective, then Killer Is Dead might be for you. It doesn’t play amazingly well, but it’s an experience unlike anything else this year.

This is a dark, brooding, surreal game like Suda51 hasn’t done since his Killer 7 days
REVIEW SCORE
7
File Under: Suda51