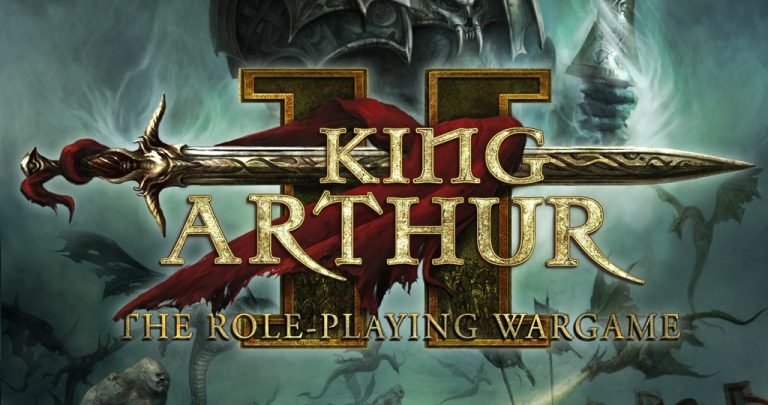 History — especially ancient history — is always made up of a hazy mixture of record and myth. Rather than try to gloss over this fact, King Arthur II: The Role-Playing Wargame embraces it, resulting in a strategy game full of gleefully absurd historical fiction and a personable mixture of British legend, truth and original invention.

In developer, Neocore Games’ version of the Arthur myth, ancient Britain is populated by very normal men and women, but also wizards, ghosts and armies of monsters taken from the pages of Celtic myth. The game is set after the highlights of the Arthurian legend have already taken place: Britannia is united, Camelot and the Knights of the Round Table have been founded and the Holy Grail has been recovered. Instead of allowing the story to rest here, at its logical conclusion, King Arthur II has the Once and Future King mortally wounded after its opening cinematic and your hero characters (Lancelot, Morgana le Fay and Arthur’s son William Pendragon) scrambling to find a way to heal him while fighting off demonic hordes and uniting a realm full of squabbling tribes, religious orders and living iterations of pagan folktale creatures.

King Arthur II, like its predecessor, injects role-playing morality systems into its strategy gameplay in a highly effective manner. Moral and religious alignments (benevolent or tyrannical, pagan or Christian) are directly influenced by how the player chooses to tackle the quests that make up the storyline. Though the effects of this mechanic are mainly superfluous (unlocking different unit types and spells), the omnipresent system at least serves to reinforce the game’s story on its actual play.

The quest system forms the backbone of the game and provides a constant narrative goal during the turn-based exploration and management of King Arthur II’s version of a war-torn Britain. Players move their hero character around the map, picking fights, overseeing provinces (by upgrading buildings and troops, researching new skills or recruiting army units) and, ultimately, choosing when to go after any of the active quests available. Considering how much of the game’s content depends on these quests, it’s a good thing that they’re well designed and vary so much in structure. There are three styles — Adventure, Diplomatic and Battle — and each offers a different way to progress the story.

The Adventure and Diplomatic quests are, essentially, text adventures where the player influences how a given objective is achieved. Using knowledge of the game’s lore and/or common sense can lead to these quests ending in a favourable way (i.e. rewarding experiences points, money and items) or a negative one (losing health, magic or troops as a consequence of bad choices). The writing in these modes is impressive, demonstrating a lot of care for the subject matter and an attention to detail that makes good on King Arthur II’s claim of injecting role-playing into the typical strategy game. Despite the uneven voice acting, Neocore’s writers have done an exceptional job of penning an enormous amount of flavour and narrative text. The presence of a few typos, awkward sentences and one of the most anticlimactic endings ever presented is dwarfed by the ambition on display by the developer’s world builders.

The battles, on the other hand, are far less impressive than their text-based counterparts. Neocore obviously admires the Total War franchise a great deal and seeks to emulate the series’ grand real-time combat but, considering how much difficulty its role model has had in stabilizing its own (well-practiced) vision of large-scale warfare, attempting to cop that particular style of play seems a bit misguided. King Arthur II fails to capture the massive scale and obsessive attention to detail that characterizes Total War, but it does offer a novel twist on the formula through its offering of magic options.

Hero units come equipped with offensive and defensive spells, limited by mana reserves and cool down times. Each army also enters battle with a Magic Shield — a defensive barrier that lessens the damage incurred by enemy spells. Troops begin each battle with a Magic Shield level, which can be maintained or lost as spells are launched and weathered. This mechanic is further emphasized through a set of key locations on the battlefield. The armies that manage to capture these points are able to use powerful abilities (weather-changing effects, troop respawning or, say, blankets of offensive lightning) that can turn the tide of a battle to the occupying forces’ favour. All of this works to add a welcome, additional layer of depth to the battles. Distracting the enemy with a frontal assault while cavalry units rush to take over control points helps to make the pace of a King Arthur II fight feel a bit different than the series it apes.

Not everything works this well though. Many of the battlefields are simply too large for the relatively small armies populating them, taking away from the strategic possibility of sneak attacks and truly effective cavalry flanking. The game also suffers from choppy battle movement and stiff animations. The camera pans at awkward angles, making control feel cumbersome during more relaxed situations and extremely frustrating during life-and-death battles where quick thinking (and player input) can make the difference between victory or failure.

Some of this can be attributed to bad design, but more of it seems to be the result of poor optimization. King Arthur II comes with unfortunate performance issues, stressing the computer used for this review despite the fact it surpassed hardware requirements by a good margin. Worse yet, frequent bugs and inadequately tested patches caused my game progress to grind to a halt at many points. Mandatory quests were impossible to complete depending on the state of the most recent patch and were coupled with desktop crashes and tediously long loading times that added up to make King Arthur II — a game that was still a lot of fun to play when it was going well — impossible to truly enjoy.

It ultimately feels like the developers bit off more than they could chew, attempting to craft a large-scale experience but neglecting the fine details of combat and technical optimization. This is unfortunate when the turn-based map exploration and text adventure quests are so well realized. If the real-time battles were completely abandoned in favour of a more direct, perhaps turn-based RPG approach (numbers dictating outcomes more heavily than player-influenced tactics) it would go a long way toward making King Arthur II a more unique — and playable — title.

A game already lean on non-campaign features (aside from the story, only Scenario — a customizable skirmish mode — exists) could have been made leaner still, if only to encourage Neocore to play on its current strengths and downplay the weaknesses that mar what could have been a much more enjoyable experience. There’s a truly remarkable and innovative game here, but it’s obscured by its developer’s unrealistic ambitions. Because of this it’s hard to condemn King Arthur II outright, but also difficult to recommend it given how many flaws are present in its fundamental design and presentation.

There’s a truly remarkable and innovative game here, but it’s obscured by its developer’s unrealistic ambitions. Because of this it’s hard to condemn King Arthur II outright, but also difficult to recommend it given how many flaws are present in its fundamental design and presentation.
REVIEW SCORE
7
File Under: Fantasy, PC, RPG, Strategy