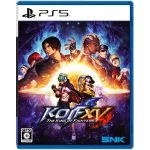 Royalty has returned at last in King of Fighters XV. Always something of a dark horse in the genre, compared to Street Fighter or Tekken, SNK’s long-running fighting series was a personal favourite back in the early aughts, and now continues its post-arcade resurgence on next-gen consoles almost six years since its last outing.

In this iteration, King of Fighters XV launches with 39 total characters, divided into 3-person teams, with an additional 12 arriving as paid DLC over the rest of the year. Three of those 39 characters are newcomers: Isla, the new “rival” character to current protagonist Shun’ei; Dolores, a priestess who uses her psychic powers to control the earth; and Krohnen, a man with a shapeshifting arm and mysterious ties to the series’ shadowy villains.

True to series tradition, players pick one of these teams or draft their own, and head into battle; fights are handled survival-style with no tagging out, and the last team standing wins the round. I’ve always liked this approach over the traditional 1v1, best-of-3 format most of the genre uses and returning to this tactical character selection was invigorating.

Overall, King of Fighters XV’s launch roster feels very well-balanced, walking the line between real-world fighting styles and the supernatural with considerable aptitude. Of course, some of the fantastical powers, like Dolores’ sand coffin grabs, can feel a little unfair when the AI is grabbing your traditional fighter out of the air—but this is inevitable when you mix karate with magic powers, and it feels less malicious overall than other games in this vein. Even though I haven’t played this series in years, most of the roster was recognizable, and each familiar face brought a wave of pleasing nostalgia.

It’s worth noting, too, that the launch roster is fully fleshed out, including practically all the major faces we should expect to see. Sadly, after Dead or Alive’s last two outings, it feels applaudable to see a fighting game launch in a complete form.

Better still, almost every character has their own distinct style, a refreshing change from the likes of the clone-riddled Street Fighter. Some of the individual characters may not be as charismatic or memorable as Street Fighter’s iconic lineup, but each of King of Fighters XV’s contestants is unique and well-honed. SNK has been revealing each playable fighter in regular YouTube updates for the last year, and I was pleased to find that each is as much fun to play as their reveal trailer suggested.

If you’re playing solo, Story Mode is likely your first destination, and here is where the game begins to falter in its mission to “shatter all expectations.” It’s a very serviceable Story Mode, but it’s bare-bones. There’s one intro movie and one midway scene that plays on every run, and no other story until you reach the end. Then the typical calamities ensue, with your team being the one to defuse the situation, and your reward is a non-voiced epilogue scene featuring your heroes returning to their daily lives.

“If you’re playing solo, Story Mode is likely your first destination, and here is where the game begins to falter in its mission to “shatter all expectations.””

Only a handful of the characters have anything to do with the big picture story; if you don’t pick certain teams, the story mode is simply a gauntlet of fistfights, a showdown with the final boss, and one simple cutscene. You also see a short pre-bout intro if your active fighter is matched against their rival, like Isla with Shun’ei.

I may expect too much narrative meat from fighting games, but it’s not too much to ask that we have a vague inkling of our team’s motivations, especially when bitter rivals like Iori and Kyo are working together. It’s the bare minimum they could have done, and with the long development time, I was hoping for at least an appetizer to sink my teeth into, not a Costco sample.

While it continues to perpetuate gripes that I’ve had with the genre for decades, King of Fighters XV does manage to handle these shortcomings with grace. What story was present was interesting even without experiencing the previous game’s setup. Without spoilers, the final bosses were genuine challenges; I may be picking on Street Fighter again, but I appreciate that the final boss was an actual obstacle, and not just one boss with all the series’ iconic, cheapest moves at its disposal. (I recommend starting by beating Story Mode with Team Hero, Team Ash, and Team Rival before moving on, for optimal effect.)

“I may expect too much narrative meat from fighting games, but it’s not too much to ask that we have a vague inkling of our team’s motivations…”

Graphically, I’m not sure King of Fighters XV lives up to the full potential of the PlayStation 5. Some models still remind me of PS3-era Dead or Alive cutscenes during Story Mode sequences, but overall, the stages and visual effects look fantastic. Underpinning it all is a serviceable score; outside of some key themes, nothing really stands out much, but I count this as a positive, since most fighters usually have one or two heinous tracks you dread hearing.

However, if I can get particular for a moment: character intros were a real missed opportunity to inject some charm. One vanilla fanfare accompanies each intro instead of that character’s individual theme, and you don’t see your own fighter enter the scene. Each fighter has one victory cutscene when they finish the match, or short animations when they win a round; they also have a personalized retort for almost every other fighter for Story Mode celebrations, but that’s it.

Presentation gripes aside, King of Fighters XV has a solid engine, and is genuinely fun to play. Unfortunately, I was not able to participate in any online matches pre-launch, but fighter aficionados will find all the requisite modes in that department. Beyond that, Versus Mode allows for regular play against CPU or human opponents without Story Mode’s trappings, while Mission and Training Modes will build your skills with your preferred brawler.

All told, King of Fighters XV makes the standard offerings for a fighting game, and while it feels a little thin in some departments, what’s here is almost universally well done. Unlike certain other fighters over the last few years, I was left excited and encouraged to seek out all the unlockable endings, or to hone my skills.

King of Fighters XV set out to “shatter all expectations” and met most of them instead. While a slightly hollow presentation sets its crown crooked, the game’s core is a solid engine and a diverse roster that will warrant longterm play.
REVIEW SCORE
8
Buy Online
File Under: Arcade, Fighter, King of Fighters XV, PC, PlayStation, SNK, Xbox