Life is Strange 2’s stand out moments have always come when it let itself move beyond the series’ caricature of high school and occasional emotionally manipulative tendencies to deliver a supernatural twist on its very real depiction of the modern U.S. political climate.

And in episode four, “Faith,” it delivers a more succinct and damning commentary on the state of the country than it has in any episodes prior. It’s proof that life doesn’t have to be strange to be compelling, moving, or in a time of toothless developers unwilling to admit the political nature of their work, brave.

“Faith” picks up two months after episode three, where the Diaz brothers were last seen fractured by an accident involving Daniel’s powers. Sean was left comatose and Daniel hadn’t been seen in all that time. Now out of his coma, Sean is set up to be transported to juvie for the death of the cop in the first episode, but not before receiving medical care and some rehab after the loss of his eye in the accident. The night before he’s scheduled to appear in court he receives a note that tips him off to Daniel’s location, leading to another trip to a small church community in Nevada.

In its earliest scenario, which includes a multi-route prison break from the hospital, I was determined to make good on some of the carnage of past episodes. While involving some hospital staff, even ones who Sean had become close to in his time recovering, would have made my escape easier, I took the more difficult path in hopes that I could reduce the collateral damage of past episodes, especially episode two’s needlessly putting those who have been good to the Diaz brothers in harm’s way.

My escape also allowed me some closure on my version of Sean’s relationship with Finn, who I pursued a romance with in episode three. It might not have provided the permanence I’d been longing for in that episode, but it gave me a chance to hope that someday they might find each other again, and if not, at least Finn would know Sean loved him.

But once Sean is out of the hospital and into the real world it becomes a stark reminder of how much bite Life is Strange 2 has left in portraying the way America treats people it perceives as others.

[Spoilers for Life is Strange 2: “Faith” below]

One of “Faith’s” most maddening, gut-wrenching, and powerful scenes happens when Sean is on the road to Nevada, confronted by a pair of white men who find him sleeping in a car on their property. One man looks through the car, tells Sean to say things like “this is not my country” in Spanish, and demands he sing something in Spanish or face the violent consequences.

Maybe, even when I’m facing this kind of harassment through an avatar, I put my pride above my own safety, but I stayed silent through every demand and refused to sing. It ended in the man attacking Sean, who had to carry those bruises and cuts with him as he continued into Nevada to find his brother. By this point, the Diaz brothers had already seen their share of racism, stereotyping, mentions of building a wall and were now being threatened with violence unless Sean renounced his ownership of the country he lives in.

In a way, these bruises were just giving tangible form to everything Life is Strange 2 had put the Diaz brothers through, but there were more wounds to come.

Once in Nevada, Sean finds Daniel has been taken in by a religious cult headed by a charismatic and manipulative reverend who views his telekinetic abilities as a sign of God. This community denies science and medicine, forces conversion therapy on its queer members, and has convinced Daniel must repent for his sins by using his powers to act as proof of God’s existence.

The ways in which “Faith” can play out in its latter half test the limits of its familial connections, how far they can go, and if ones thought broken can be repaired, all while fighting against a view of the notion that is entrenched in deceit and delusion. So much of this community’s belief in what makes a family is rooted in guidelines that deprive one of their own agency. But with the wide range of characters throwing their two cents into the fold, Life is Strange 2 comes down on the side something flying in the face of established rules and norms presented in religion and tradition to make a case for defying all of the above to choose your own path.

Given the framing, especially with examples like a young man who left the community after being made to participate in conversion therapy after he realized he was attracted to men and a child who leaves after being denied treatment for a serious illness, “Faith” portrays religion as a trapping for queer people, as well as a danger to the health of those without the means to fight against it. In a game that has already had its share of bringing attention to how established systems and cultures are keeping people marginalized, Life is Strange 2’s depiction of religion feels in keeping with everything it’s done so far, and saving Daniel from its clutches was the full circle closure of four episodes of conflict I needed. Despite some major developments I thought might open up new possibilities for the Diaz brothers, it sounds like the finale due out in December will finally bring the two to Mexico as they planned what feels like a lifetime ago. After everything I’ve seen them go through, I’m more than happy to finally take them there.

“Faith” continues Life is Strange 2’s examination of a broken system to showcase a series at its most powerful. 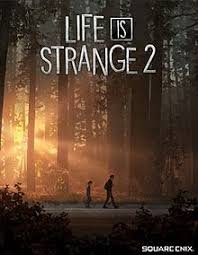