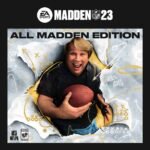 There are three certainties in life. Death, Taxes, and EA releasing a new Madden every year, and of course this year is no different with Madden NFL 23. Right off the bat, the newest title is graced with legendary football coach John Madden, complete with his signature voice that can be heard throughout the menu screens. Madden 23 is a massive step forward for the franchise, but that’s a VERY low bar to clear.

There are many new features that have made their way into Madden NFL 23. There is a new FieldSENSE concept that feels organic and allows collisions with other players to not borrow the exact same animation that plagued the previous Madden NFL 22 on every down. This concept is not included in the previous generation of titles, so PS4 and Xbox One players are left on the sideline.

The skill-based passing system is a new inclusion to Madden NFL 23, which allows QB control to be better than ever, but with greater control comes a greater learning curve on picking up and playing the football sim for newcomers. Madden veterans can employ these concepts simply, as they don’t necessarily reinvent the wheel.

A small accuracy reticle is placed in a grey area, allowing to lead receivers sharper than ever before, giving the player ‘thread the needle’ type control. Utilizing these new concepts while poking holes into defences felt rewarding, but this is the hardest offensive play I’ve experienced in Madden overall.

There are a few more concepts brought to the QB play. There is a bar for throw power, which reminds me of MLB The Show 22’s pitching gauge in design, and there is also an accuracy marker allowing the player to get even more accurate. These are really cool design choices and give the player a greater degree of control.

However, with all of this information being thrown into the mix during real time play, getting overwhelmed by so much information is almost assured, as so much is constantly happening on the screen at once. Players can elect to return to the original control scheme for an easier time, but then it just feels like Madden 22 with extra steps.

“Madden NFL 23 is a huge step in the right direction for the franchise.”

Interest in the newest title is supplemented by the start of pre-season NFL Football games, and the overall ratings for the players can fluctuate based on how they perform in real life, which is a great addition for fans of the weekly live games. Chad ‘Ochocinco’ Johnson is heavily active in the title’s marketing, and he makes it a point to tell fans through Twitter who gets ratings adjustments each week.

This isn’t new to the franchise, but the ‘My Player’ mode called Face of the Franchise has Ochocinco giving a monologue about reaching the 99 club, which is his way of saying a player is among the elite. Having a charismatic player talk to fans is a neat concept and made me feel like a part of the NFL.

Besides the monologue, Face of the Franchise is the most miserable part of Madden NFL 23. Creating a character that can go to an NFL team with the included rosters is a cool idea on paper. But, the mode lacks the strength of the rest of the game in many ways. The camera is not adjustable and feels cumbersome in this mode, which really tears down the experience.

When pressing the LT to see receiver routes, or when on defence looking at the defensive plays, the routes feel glitchy. Sometimes it will show exactly what the play is, other times it will show a completely different play concept than what was selected. This is used to show when your created player is under stress, as the top of the screen details that when it happens, but it feels lousy. The storyline dialogue is loaded with cringe, and just lacks an organic feel as your created character is constantly on the receiving end of smoke blowing. I don’t think even Tom Brady is on the receiving end of that much praise.

New concepts are also introduced in this mode like scheduling your players a whole week prior to gameday, training modes, choosing a rest day, and other miscellaneous activities can be selected which can temporarily increase stats. But these additions just feel like filler, and don’t add to the overall gameplay of Face of the Franchise. Speaking of which, Franchise mode is always the best part of the Madden experience, and Madden NFL 23 is no different.

This mode has received new looks, complete with FAR better menus, and more information given to the player than ever before. The greatest experience I’ve had with Madden NFL 22 was the online fantasy draft with friends, and the newest entry makes it better. Loading up the active NFL rosters and selecting favourite players from each team to play as a unit is a great time and allows fans who are upset with their real life team a chance to live vicariously through Madden.

“Madden NFL 23 is a huge improvement over the previous title.”

Last year, one of my friends played as a Head Coach, and he performed badly, so the game fired him. This was admittedly hilarious, but Madden NFL 23 allows the commissioner to turn off firing for player-controlled franchises, which is a good option for those who want their friends to remain in the league. The RPG-like mechanics when playing well with certain players are always great, which allows fans to upgrade their best players that perform well.

Like last year, Madden Ultimate Team makes a return, and like last year, it is infested with microtransactions. This mode was a good time over a decade ago, but it has severely lost its lustre, with reliance on pay-to-win functionality. Ultimate team could be skipped this time around.

Madden NFL 23 is a huge step in the right direction for the franchise. Overall better feeling gameplay, complete with over 3500 new motion-captured animations, allows each collision to feel like a new experience. New controls give the player greater command on plays, and new AI adjustments take away from players ability to ‘cheese’ the computer, running the same effective play over and over again no longer works.

The difficulty spikes are abhorrent. The ‘Pro” setting feels far too easy, and the “All-Pro” setting feels like the computer always has your number. Gameplay is improved, but not much has been truly added to the core components, which is especially true for previous generation console owners. The reliance on most game functions only working when connected to the online EA servers is also a huge bummer but all in all, Madden NFL 23 is a huge improvement over the previous title.

Madden NFL 23 is the best entry in the franchise in the past 10 years, but with such a low bar to clear and EA effectively having no competition, it can feel too similar to prior games to warrant the hefty $69.99 price tag.
REVIEW SCORE
7
Buy Online
File Under: EA Sports, Madden