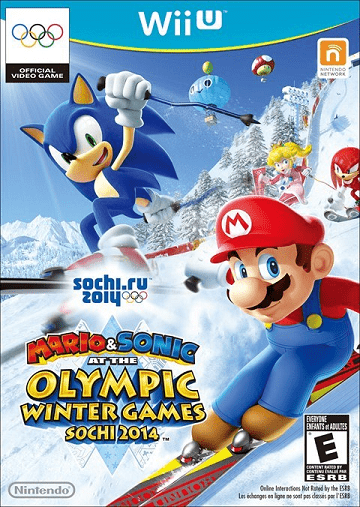 The legacy of Wii Sports sure is an odd one. It was one of the highest selling games of all time and one of those “Wowsa!” moments where once you played it, you knew the video game world would never be the same. It was the title that sold a bazillion Wiis and got everyone from hardcore gamers to single Moms and Grannies excited about playing video games in the new millennium. The trouble was that it was essentially just a tech demo and a gimmick that grew tired fast. Nintendo could barely pull a single successful sequel out of it’s hat and the real legacy that followed the Wii Sports juggernaut was of all things the Mario & Sonic Olympics series.

These suckers come out constantly, make little impact in the game reviewing world, and even though you probably don’t know anyone who owns a copy, they clearly shift enough units to justify Nintendo returning to that well again and again and again and again and so forth. Now the series debuts on Nintendo’s shiny new Wii U just in time for Christmas. There’s nothing particularly new, exciting, or special about this entry in the series (aside from the graphical upgrade), but it is undeniably fun in a gimmicky way. I suppose it’s an ideal game to half-pay-attention-to while playing amongst friends or family over the holidays. And that my friends, is sadly the ultimate legacy of possibly the most financially successful game Nintendo ever made.

Unsurprisingly, this new and unwieldy-titled chapter in the series Mario & Sonic At The Olympic Winter Games Sochi 2014 is pretty much exactly the same as what’s come before with a few minor upgrades. There are 18 events in all, each based around a simple motion control mechanic with a couple exceptions. There’s really no need to go through them all, so let’s discuss a couple highlights. The snowboarding mode defines what most games are like. It’s a speed and trick run that requires you to use the gamepad motion sensors for balance and touch screen for tricks. It’s fun in short bursts. Weirdly, one of the best implemented games is the curling, which is the only one that uses the gamepad in a significant way (for the most part it just keeps track of statistics while you stare at the TV). You’ll use the gamepad to draw a trajectory on your touch screen and then flick the stone with the Wiimote. It’s cleverly laid out, but it’s also curling and a curling simulator isn’t exactly a major selling point on any game.

The best mini-games are in a category called “Dream Events.” These games are even more exaggerated than the regular sports sims. The hockey game is probably the most enjoyable, ditching motion controls for sticks n’ buttons. It’s a simple hockey game, but with extra powered shots and hits added for a NBA Jam style heightened experience that’s undeniably quite enjoyable and addictive. The other standout Dream Events are a third person shooter snowball fight (nuff said) and a Bullet Bill themed bobsled race. The bobsled race plays as you’d expect, but really shines thanks to beautiful graphics and sound design that makes it feel like a rollercoaster. It’s a beauty to behold, as is the game as a whole. While previous Mario & Sonic Olympics games were hampered by the Wii’s horsepower and rushed deadlines, the Wii U debut is polished and gorgeous, with each Sega/Nintendo mascot well rendered and each game well represented. It helps augment the simple playing designs and ups the fun factor. So that’s something.

There are a few single player options, like an obvious campaign mode that takes you through all 18 events against a shadowy doppleganger for an extra speed challenge, as well as a shorter mode called Medley Mania that randomly selects a few games for a quick run. Then there’s the weird game show-style Action & Answer mode that tosses in trivia questions between randomly selected mini-games and adds absolutely nothing to the experience. However, the real selling point on a game like this is the multiplayer. You can do this locally through individual events or multi-events challenges or, for the first time, you can play online. Playing locally is really what the game is all about, allowing for plenty of opportunities to scream mockingly and siblings/friends through all the simple mini-games.

It’s fun and a minor distraction. Nothing you’ll come back to for very long, but definitely a good way to get competitive on a couch. The online mode allows you to play the same mini-games with folks from around the world. It’s essentially the same experience as single player just with the added challenge (or not, depending on the opponent) of facing off against another human. Multiplayer definitely spices up each and every one of the 18 mini-games regardless of which mode you choose. But in the end, it’s all the same thing.

I suppose it’s an ideal game to half-pay-attention-to while playing amongst friends or family over the holidays.

It’s hard to review a game like Mario & Sonic At The Olympic Winter Games Sochi 2014 because the title is, by design, completely frivolous. You know what you’re getting when you pick this thing up and it certainly isn’t innovative design, brain-tingling challenge, or complex storytelling. Nope, this is essentially a motion gimmick party game with an Olympic theme and Nintendo/Sega cast. So, obviously it’s a minor gaming experience. However, it is also an undeniably entertaining one. Sure this game isn’t going to get as many spins in the system as a Mario Party title.

Yet, it does what it does efficiently and with some pretty visuals. With the right expectations, there’s plenty of fun to be had and it’s certainly the most enjoyable game in the franchise I’ve ever experienced. You just have to know what you’re getting and set expectations accordingly. This is a holiday family gimmick from Nintendo after all, the digital equivalent of a family board game. There’s nothing wrong with that, it’s just a shame that Nintendo never figured out anything more substantial to do with their groundbreaking motion controls. Ah well, maybe next year.

It’s hard to review a game like Mario & Sonic At The Olympic Winter Games Sochi 2014 because the title is, by design, completely frivolous.
REVIEW SCORE
6
File Under: Luigi, Mario, Nintendo Wii U, Sonic the Hedgehog, Sports, Video Game