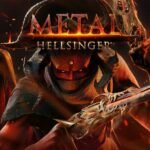 Nothing beats a good game soundtrack. Music can build on a narrative with flair, setting the mood in a dramatic effect, and in some cases a soundtrack can be even more memorable than gameplay. Enter Metal: Hellsinger, a title that isn’t afraid to be ‘that song from that game,’ but also, break the mould with fast-paced addictive gameplay that sets the player’s teeth on edge.

This hell is overseen by the Red Judge who plays devil master in Metal: Hellsinger, and the punishment for serving here is to have what you cherish most taken from you. You are The Unknown, a half-human half-demon who needs to exact revenge. The Unknown’s voice has been taken, and after serving for a long time and being gifted a chance to claw out and shoot the Overseer hasn’t been this appealing since Fallout 3. The ultimate mission is to blast through the different ‘Hells’ in a confrontation with the Red Judge, while showing this demon can still sing.

The story is a simple yet engaging affair, and I won’t spoil it but what I will say, is your only friend is a skull called Paz, he’s your only company in Hell, and operates as a side-kick/weapon voiced by Troy Baker, but sounds like the southern is laid on too thick without humour. The story indeed takes itself a bit too seriously, however, Metal: Hellsinger is FUN.

The player is injected into a fiery hell, with wicked armaments to unleash a rondo of blood. A small in-game tutorial explains timing your shot — or swipe if it’s the sword, Terminus — to the beat of the song has repercussions for the horde. While the music is blaring, and your weapon is on cue, it harmonizes superbly and feels like you’re on stage with the band. The music was created for the game, and it truly shows.

“Metal: Hellsinger checks the boxes of being a fast-paced FPS rhythm arcade title…”

Timing hits right rewards the player with a ‘Fury’ meter that sits at the top of the screen, which not only increases the firepower behind Unknown’s onslaught, but increases the intensity of the music. More layers and instrumentation tack on as the player does well, and when Fury hits 16x, the vocals from the tracks roar through as if forcing the player to keep up the pace. Shredding with the Two Feathers band is righteous. The vocal talents of Serj Tankian, Lamb of God’s Randy Blythe, and Arch Enemy’s Alissa White-Gluz were blood-chilling, and it’s still difficult to get ‘Stygia” out of my head.

While demons of hell swarm the player, shooting, dashing, sword swinging, and jumping are your bread and butter of survival. The frantic gameplay echoes the triumphs of 2016’s Doom, where getting a killstreak rewards the player with blood boiling music that enhances the carnage.

Shooting and reloading to the beat continuously reward the player throughout, and like other rhythm games such as Guitar Hero, the player improves the more time is spent. By the second stage — which are referred to as “Hells” — the gameplay workings become fluid to the average player, and slaying just hits different.

There are devastating ultimate attacks to unleash against the hordes, allowing more carnage to spill, and vocal tracks to remain playing. These are necessary times of repose; a well-timed shotgun blast can wipe a swarm out and allow the player to regain their bearings. Well-timed executions called slaughtering can be utilized in combat while enemies flash. This grants the player health points for their effort and adds another degree of strategy to slaying demons. These delicately balanced game mechanics make Metal: Hellsinger a force to be reckoned with and pins the player to the edge of their seat.

There are many enemy types in Metal: Hellsinger, with the typical cannon-fodder foot-solider types that just run into your barrel called Marionettes, to dreadful poison spewing Eyeless that fly around annoyingly, and even shield enemies that force Terminus from its sheath. These enemies can devastate a Hell run, unless the player remains vigilant. While difficulty selections give the player more ‘lives’ in Hell, failing even once feels tremendous, as ‘reviving’ resets your Fury, and strips 300,000 score from the player.

While traversing a Hell — which while not wholly original, are varied and designed decently enough — a score builds on the screen, like an old school arcade game. I think this is a really cool feature and adds needed replay ability to Unknown’s adventure.

Therein lies my two faults with Metal: Hellsinger. The enemies are varied during basic gameplay, but each end stage boss is referred to as an “Aspect of the Red Judge” and has basically the same DNA, the dreaded ‘same boss with extra steps.’ It becomes tiresome to see the same looking and behaving enemy at the end of each stage, which is a big letdown from the action parts.

Also, Metal: Hellsinger feels short. I was able to wrap the story in five-ish hours of gameplay. Trying higher difficulties does change the game experience to a more punishing degree, but the level designs remain the same. There are neat challenges to complete on each level called “Torments,” which basically introduce background lore, and throw the newest enemies introduced to the player in that Hell in a crucible with different effects. This is a cool concept, and it barely morphs the Metal: Hellsinger formula, but that’s not necessarily a bad thing.

Metal: Hellsinger checks the boxes of being a fast-paced FPS rhythm arcade title, but it is most importantly a really good time. The rhythm and arcade aspects shake up the Doom formula just enough to feel super original, while treating players to one of the best original gaming soundtracks to date with the help of incredible real-life accomplished artists.

Tight gameplay, and strong mechanics make this a harmony of music and chaos interwoven with adept precision. The lack of boss variety, humour, and content variety place an odd reliance on the score leaderboards, which is a confusing step for a title that embraces new ideas. But all in all, Metal: Hellsinger is a good option for metal enthusiasts, FPS enthusiasts and everything in between.

Metal: Hellsinger is a scream come true for metal music FPS fans and could make anyone a fan of The Metal.
REVIEW SCORE
8
File Under: Funcom, Music Game, The Outsiders