A Modern Look at a Classic Series 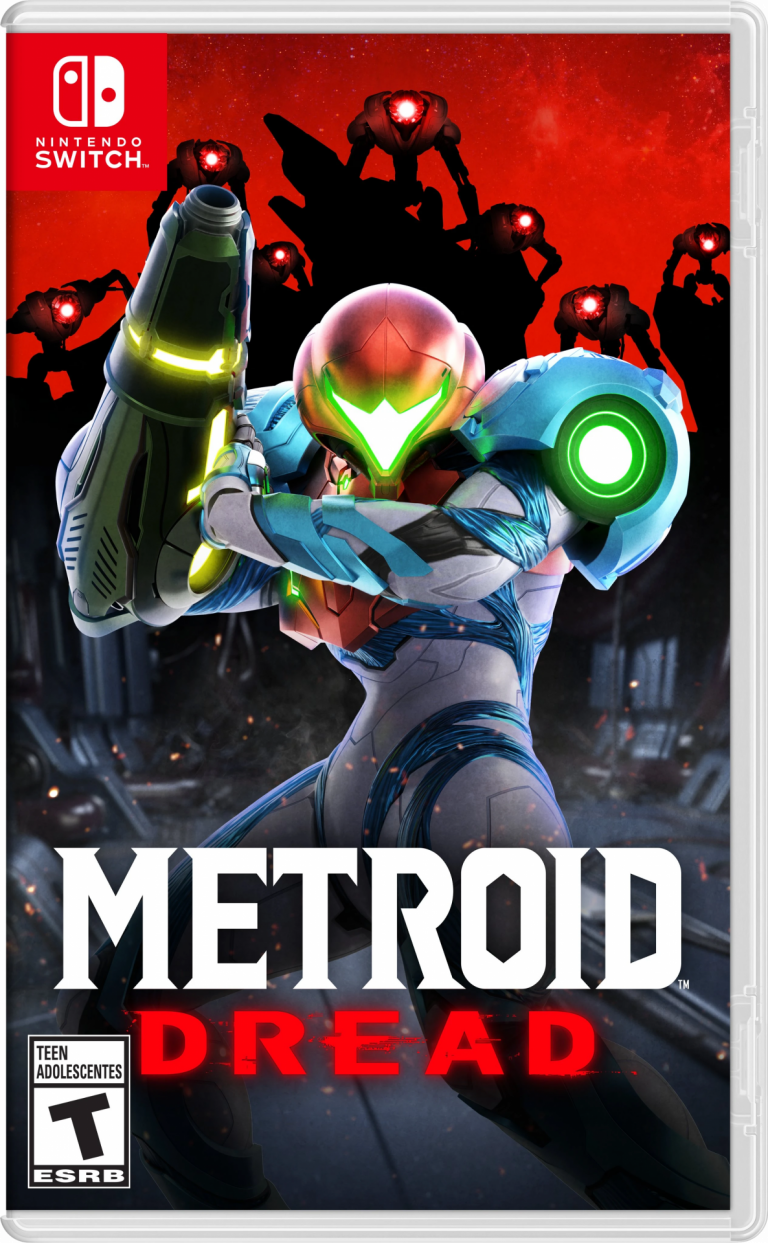 One of the all-time Nintendo Classics is back and just in time for the release of the Nintendo Switch OLED. Samus Aran is geared back up and continues her adventure in the beautiful side-scrolling soon to be classic, Metroid Dread.

In Metroid Dread, Samus receives a strange transmission from a distant planet and gets trapped by a new enemy. The bounty hunter will have to battle her way out of a dangerous maze as she takes on a number of aliens and robots, including the intimidating E.M.M.I. (Extraplanetary Multiform Mobile Identifier). It’s up to you to guide her through the Labyrinth and escape the planet.

Samus’ controls include a high jump, free aiming and melee attacks with the ability to slide, cling to blue surfaces and wall jump. Stealth movement also comes into play as you try to avoid the E.M.M.I. which are as tough to defeat as they are scary. Keep the noise down, move slowly and equip items that can help you avoid the hunter robot’s gift.

Another interesting addition is the ability to incorporate the new Amiibos for Metroid Dread. The Samus Amiibo gives you an extra energy tank with an additional 100 energy, and you can use it once a day to recover some energy. The E.M.M.I. gives you a larger missile capacity, and you can replenish your missiles once a day. Both Amiibos come together in a two-pack.

“For a side-scrolling game, the environments in Metroid Dread are rich with depth. “

For a side-scrolling game, the environments in Metroid Dread are rich with depth. Every pixel on the screen comes to life, and you can feel the multiple dimensions in a way that is very uncommon for a game of this type. The map reminds you of the Metroid games of old, but the environments that you navigate are diverse and challenging. Try not to get lost while you try to avoid being caught or killed.

You will be taking on enemies in all directions, requiring an assortment of weapons and techniques. Catch them as they climb up the walls, fly above you and swim about. You even have a fighting chance against the E.M.M.I. if your timing is right. Hitting a button at just the right moment gives you a chance to melee counter and escape, at least for a time.

The sound adds a level of creepiness to the gameplay that is reminiscent of a Resident Evil Game. The ambient music mixed with the environmental sounds are immersive and the changes to the music when things get intense are bound to raise your blood pressure. Well, maybe not your blood pressure, but I am a jumpy gamer and it gets my heart pumping.

There are a number of power ups to get you through your adventure. Things start fairly basic for Samus, but as you find certain stations on the map, you get all kinds of new weapons and abilities. Use your beam attacks, missiles, morph ball, camouflage and so much more as you progress through the game.

Metroid Dread is a fun challenge. While most enemies are fairly simple to take down, they are not your only obstacle. Navigating the difficult labyrinth that is the map and avoiding the E.M.M.I.s will get you moving in all sorts of different directions, sometimes in circles, trying to keep yourself safe. The better you get at countering the robots and quickly maneuver through the stages, the faster you will get to that ultimate goal.

A small complaint I had was the amount of cut scenes in the early moments of Metroid Dread. It felt like you couldn’t make it too far in any direction without a new scene playing out. Not enough of it was instructional or provided you with much more exposition than at the very beginning of the game, which was frustrating, but you manage to get through it, and it calms down moving forward.

For people wondering if they should download Metroid Dread or purchase a hard copy, it is worth knowing that the game is only 4.1 GB, so there should be plenty of room on your hard drive if you prefer to stay digital. At $59.99 USD, it is the same price as your standard Nintendo offerings, but is a worthwhile purchase for the true Metroid fan.

Metroid Dread is a wonderful, modern take on a classic game from childhood. It looks as beautiful as any of today’s games, but has a feel of the games of old. The scary tone of the game and its intense foes give you a challenge worthy of the series.
REVIEW SCORE
9
File Under: Game of the Year 2021, Metroid, Nintendo Switch