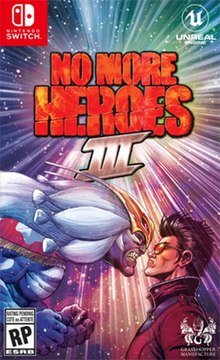 Suda 51 and Grasshopper Manufacturer have become synonymous with games that veer on the weirder side of things while evoking an even stranger yet recognizable aesthetic. The No More Heroes series of games are no exception. After over a decade between mainline instalments, No More Heroes III is finally here, concluding Suda51’s arguably most well-known series of action games and bringing the Johnny Knoxville inspired Travis Touchdown’s story to a close.

For those unfamiliar with No More Heroes, the third game doesn’t rely too heavily on its past instalments, including the spinoff title Travis Strikes Again in its narrative. Of course, those who have been following the story will appreciate seeing the return of some fan favourites. However, like previous entries into the series, No More Heroes III features an incredibly over the top and often nonsensical narrative that essentially boils things down to the fact that Travis is an assassin tasked with participating in a killing game composed of 11 equally deadly killers, whom in the third instalment, happen to be space aliens.

No More Heroes III’s story may not be worthy of any awards. Yet, the sheer strangeness of it makes it a genuinely unpredictable one, delivered in a way not dissimilar to daytime Japanese variety show programs, spliced in with a healthy dose of Western pop culture and anime bombast.

Unfortunately, from a technical standpoint, No More Heroes III feels all over the place. With the core gameplay sequences feeling adequate and even impressive at points to behold, No More Heroes III’s bold art direction falls apart by a barren and antiquated semi open-world that seemingly feels ripped straight out of the 2010s — coupled with constant pop-in and uneven texture work, the game ultimately as though it sacrifices graphic fidelity to run at an acceptable framerate on the ageing Tegra based hardware.

“Thankfully, as mentioned earlier, No More Heroes III’s art direction and over the top kitschy and puply visuals still carries through for when it matters and delivers an experience unlike any other on the Nintendo Switch.”

Thankfully, as mentioned earlier, No More Heroes III’s art direction and over the top kitschy and puply visuals still carries through for when it matters and delivers an experience unlike any other on the Nintendo Switch.

Gameplay is king in No More Heroes III, which saves it from being just another pretty but hollow experience. Like previous entries into the mainline series, No More Heroes III features third-person melee combat, in which the player can use their Star War’s inspired beam katana to wreak havoc on an eclectic roster of alien baddies.

With light and heavy attacks assigned to the Y and X button, a dash button set to A, and a new jump ability, sword combat feels fresh, pairing nicely with unlockable DeathGlove powers, ultimately contributing to the perfect amount of variety that keeps things engaging throughout.

Controller options are also well implemented in No More Heroes III, which purists and fans of the Wii originals will appreciate, as the detached Joycon configuration approximates the Wii-remote style finishers found in the former games accordingly. While the handheld and Switch Pro Controller options feel equally snappy and responsive, making both TV and portable play a similarly satisfying experience.

Outside of combat sequences, like previous entries into the series, No More Heroes III requires Travis to earn enough money to advance to the next ranking in his assassination competition against the alien threat. Fortunately, aside from killing random mobs of enemies, which always feels fun, the odd jobs present in the game feel better realized and closer to the microgames found in something like WarioWare or even 2019’s Travis Strikes Again: No More Heroes title.

It would have been nice if the leadup to the bosses in the game were more fleshed out, rather than just repeating the formula found in the former No More Heroes entries. Even still, the way the game divides the story into episodes feels appropriate for this approach, as longer sequences in between encounters may have taken away from the well-paced flow of the game.

No More Heroes III is a blast to play and a well-conceived sendoff to the series, one which stumbles on a technical level but delivers enough on the gameplay front to carry most players to the end credits of what may be the Switch's wildest exclusive to date.
REVIEW SCORE
8
File Under: Grasshopper Manufacture, Nintendo Switch, Suda51