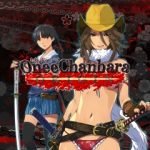 Onee Chanbara Origin feels like the video game equivalent of a B Movie. It’s got buckets of blood, absurd monsters, a barely-there plot, and almost no clothing on anyone. It’s also ridiculously fun to play, with a clever combat system that encourages relentless aggression, making for a fantastic game when you want to just cleave through hordes of creatures.

This title is a remake of the series’ initial two offerings, The Onee Chanbara and The Onee Chanbara 2, connecting them into a single plot about sisters who kill zombies. A lot of them. The game tends to throw a few dozen at you at any given time, having you carve your way through groups of grasping dead in order to reach the end of each stage.

Combat is where Onee Chanbara Origin excels. The game offers an extensive combo system with its two button inputs and handful of equipable weapons (which you can swap between during a combo), giving you an array of swings and slashes to lop off limbs with. The game also unlocks further movesets as your character gains levels, increasing your attack options every couple of stages. Each character also has a different combat style, offering all kinds of possibilities for you to work with. Many of these styles honestly feel pretty similar, with a heavy focus on swordplay, but they feel different enough that you appreciate the change in character. It’s not Devil May Cry 5-levels of difference, but it still satisfied.

The game puts a heavy emphasis on fighting aggressively with a few different systems. You have a quick, but heavy attack that will make up most of your swings, but also a light ranged attack (depending on the character) that has a good chance of stunning foes once they’ve been slapped around a bit. Once an enemy is staggered, you can do a large instant-kill attack that also eliminates or heavily damages anything in its range, which pushes players to wade into groups of enemies, lash out hard, stun something fast, and then kill them all with a single well-placed attack. Doing this to a dozen foes at once rarely got tired as I played the game.

If you’re thinking that something is going to try to hit you back while you do this, you’re right, and you have two ways of countering it. You can do a dodge that moves you out of the way, and if you pull it off just right, time will slow, giving you a moment to get your bearings. The timing on this isn’t terribly fussy, which is nice because getting dogpiled by a bunch of zombies can see your health plummeting (you can’t take that many hits, honestly). A more dangerous, but more effective option is in parrying, which has a tight window but typically stuns the enemy instantly. Good for wiping out foes, but you’ll get thumped often until you get the timing down. Both of these, again, encourage you to stay close and keep up the pressure, dodging or parrying only so you can get back to swinging.

You’re going to get a little bloody from chopping off all of these limbs and heads, but Onee Chanbara Origin rewards you for this. As you get splattered with blood, a meter charges up, and once it fills, you go into Berserk Form, which makes you cause far more damage, but your defense is lowered along with it. You can really mow foes down like this, and if you do it fast enough, you’ll enter Xtatic Form, which does even more damage and gains HP from hitting foes. Your life continually drains in this mode, so you’ll want to hit hard and fast here.

One neat, unique mechanic ties all of this together. Onee Chanbara Origin has your sword steadily get covered in blood as you use it, and the bloodier it gets, the less damage it does. You can clean it off with a quick swipe, but when you have pushed yourself into the middle of a mass of enemies, it means you’re likely going to get hit. This gives you something to consider as you’re pushing forward, forcing you to continually examine your position and your sword’s strength, trying to knock back the crowd to give yourself enough time to clean your blade and go back on the offensive. The game may have devolved into pure aggression without it, but this small mechanic makes fighting feel more thoughtful, forcing you to be also be careful while lashing out.

All of these abilities and attacks come together against a massive hordes of enemies, having you march into them and start hacking your way through. The game features several unique foes you’ll want to pay attention to, each standing out with unique visuals that make them relatively easy to spot in a crowd. You’ll also tend to notice them once they bash you in the head, as they home in on your quickly and each have some highly-damaging moves. You’ll have to juggle focusing on these creatures while continually chopping at the larger groups of foes milling around, making combat feel involved and focused even as you deal with chaotic crowds.

While the monsters you fight offer some neat variety, the locales of Onee Chanbara Origin don’t. Expect a lot of sewers, caves, and barren towns as you make your way across its world. Not that you’ll much notice them, as the game rarely lets up with its onslaught.

The characters look sharp in this iteration. The animated art style makes the characters feel far more lively than they have in any of the series’ past titles, and enhances the ridiculousness of some of the costumes, transforming powers, and personalities. The game is shamelessly raunchy as well, so expect a lot of focus placed shamelessly on certain areas to the point where I found it absolutely funny (although you likely know how you feel about this if you’re even considering picking up the game). It seems almost on the cusp of poking fun at games with scantily-clad protagonists, it goes so hard at this. But did we really need upskirts of sixteen year old thrown into the mix? And where’s the half-naked male zombie killer in this game? If zombie blood on your skin makes you strong, everybody should be half-naked. It’s only fair.

Onee Chanbara Origin, however you feel about certain elements of it, feels almost short compared to other action games, but in another sense, it feels like it doesn’t overstay its welcome. It doesn’t have a great deal of enemy variety and its stages look dull, but as the game isn’t that long, you don’t notice it all that much. Instead, it’s the sort of game you play for an afternoon or evening, blowing off steam, and then put it down. If you want to go in harder, the game offers many combat challenges to try for as you play, a variety of challenge modes, secret missions, and characters to extend your play time. It’s not long, but that feels about right, and there’s plenty to do if you want more.

Onee Chanbara Origin exudes B Movie energy in its every element, giving players a quick, aggressive action game to work through over a few hours. It’s filled with over-the-top violence and outfits, making for an absurd, compelling experience that doesn’t waste your time. If you want to look at butts and cut things to pieces, you’ve come to the right place.