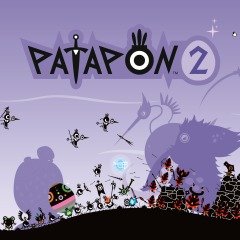 So in 2008 when I got a hold of a copy of Patapon for PSP — a 2D side-scrolling beat-match game — I had found my franchise. A bit more challenging than a casual game, packed with beat matching goodness that made you actually learn rhythmic phrases as combos for movement, attack, and defence, and featuring, arguably the most adorable troops to lead in a video game, Patapon was a great game for the mobile platform. As was Patapon 2, which expanded on the story and gameplay, making for an enjoyable engaging experience.

Now, a whole new generation of players can get “pata pata pata pon!” stuck in their heads for weeks on end, as Sony has just released a remastered version, ported to PlayStation 4 and updated to run at 4K resolution.

For those who are new to the franchise, the Patapon are a brave, noble, and dedicated tribe of…patapons who seek to find Earth’s end. In Patapon 2, the game opens at the end of the first one, with the Patapon shipwrecked after failing to find the edge and lost in an unfamiliar land, crawling with gigantic, deadly beasts, hell-bent on preventing the little tribe from finishing their quest. As their god, the Patapon beseech the player to lead them through the land and command their armies by playing a combination of rhythms on sacred drums to guide them through battle and find the edge of the world.

The gameplay is simple but tricky: the player must follow the rhythm of the earth, a pulsing beat that heard in each level’s soundtrack, as well as a blinking frame found around the screen, and execute a series of six different rhythm combinations which follow a structure of 4 quarter tone beats per measure. Execute the combination correctly in time with the rhythm of the earth and your army of noble Pons will move, and perform various types of attacks and defensive measures. Execute a series of combos accurately and your troops will enter a “fever” state which amplifies their attacks and movements. They also start singing along with your beats, improvising as the fever state continues, which makes it a lot easier to keep in time with the world’s rhythm.

At the beginning of each level you can equip your troops with an array of weapons and helmets you find along the way. As you progress, you’ll also unlock different troops with varying strengths and weaknesses, which you can level up in a literal tech tree. Throughout the game you’ll encounter vicious bosses, mini-games, side quests, and challenges, with the ability to return to each level to defeat monsters and find additional loot.

Since Patapon 2 Remastered is the base game exactly, just remastered to play on the current-gen PlayStation, there’s nothing much that’s different from the original. And while most of the levels shine through in 4k — the soft hues of the almost comic-book-style environments highlighting the flat-black and white characters look sharp and crisp — some of the cutscenes can appear rather muddy in look since it is just a port of the original graphics. Also, with it being 2020, the simple fact the cutscenes can’t be skipped is just unacceptable, especially when you need to sit through the same one for the third time for testing on this review.

In addition, It should be noted that players with 4K TVs, or with soundbars may have to adjust the video output to accommodate for some latency issues. Since the modern generation of consoles comes with a new set of technical considerations, it would have been a convenient addition to offer the opportunity to customize the way the controller synchs up with the audio or visual beats, as so many other recent beat-match rhythm games offer, and would make the game a lot more accessible for the visually and hearing impaired.

At the end of the day, Patapon 2 Remastered still the same great game it was on PSP. However, since there are so many remasters on the market that have introduced additional features to improve the game’s quality of life, it would have been nice to see something extra added with this title. But as it stands, whether you’re a fan of the original games or simply want an easy-to-pick-up hard-to-put-down game, Patapon 2 is worth buying — even if you’re only picking it up to sing along with a crowd of adorable little warriors.

For the first time on PlayStation 4, the celebrated member of the Patapon franchise, Patapon 2 Remastered is available to introduce a new generation of players to the earworm of a game that plagued PSP owners.
REVIEW SCORE
7.5
File Under: PlayStation, Sony