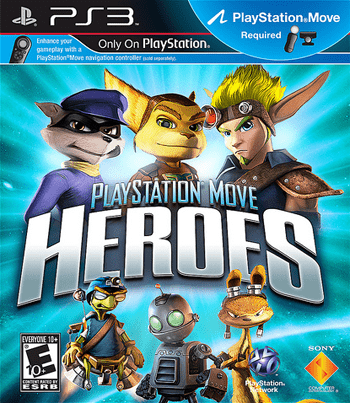 As far as titles go, PlayStation Move Heroes is about as descriptive as it gets. It’s a game that combines six Heroes from three PlayStation franchises in order to showcase the capabilities of Sony’s new Move motion control peripheral. Sadly, the game doesn’t do any of those things particularly well. PlayStation Move Heroes is a standard mini-game compilation with a significant licensing makeover, and the marketing cash-in is far too transparent to merit serious consideration.

The six heroes headlining Move Heroes are Jak, Sly Cooper, and Ratchet, and their respective sidekicks Daxter, Bentley, and Clank. The plot is a predictably contrived way to bring all of the protagonists together. A couple of evil aliens have kidnapped everyone in order pit them against one another in a rudimentary hero Olympics, although that’s inevitably the cover for a more sinister agenda.

The heroes only show up for a handful of brief and forgettable cut scenes and the dialogue reeks of compromise. Jak and Ratchet’s personalities have been handcuffed in order to make them more kid-friendly and while the voice acting is fine (the original voice actors have all signed on for the crossover) the characters never have anything interesting to say.

Fortunately, bland is preferable to bad, so there’s no need for any serious fan concern. You’re not going to see Move Heroes at the top of anybody’s resume, but Ratchet, Jak, and Sly have nothing to be ashamed of and they play their parts about as well as can be expected. Indeed, it’s the game’s one saving grace. No matter how flimsy, a story is always appreciated, and these are some of the most beloved characters from the previous console generation. You could do worse if you’re only looking to spend a few hours with some old favorites.

The problem is that while Move Heroes steals the IP of a big-budget Sony title, it borrows none of the gameplay conventions that made the original franchises so entertaining. The resulting mini-game slog is almost completely devoid of creativity and innovation, and if you strip away the façade you’re left with a game that resembles Kinect Adventures more than anything from Naughty Dog or Insomniac.

Getting into the specifics, gameplay consists of five mini-games (Disc, Shooting, Melee, Ball, and Whip), and for the most part, it’s pretty self-explanatory. Disc and ball levels require you to use the Move wand to direct either a Frisbee or a bowling ball around various obstacles, while Shooting, Melee, and Whip levels force you to kill robots with a predetermined weapon.

Those five stages are then mixed and matched with five different win conditions (Survival, Jailbreak, Guardian, Countdown, and Rescue), but the fine details don’t have much impact on gameplay. Your goal is generally to free and/or defend alien creatures called Whibbles, and you’ll get a gold, silver, or bronze medal depending on how many you’re able to save.

As for the games themselves, the shooting levels are easily the most enjoyable. The Move has always been good for point-and-click gameplay and firing bullets at the screen is just as much fun as ever. The Disc and Ball levels are also functional insofar as your chosen projectile will travel in the direction you want it to go. Unfortunately, the core gameplay idea just isn’t all that interesting. Most of the levels feel like filler, which would be fine if they didn’t account for about forty percent of the game.

The melee and whip combat, meanwhile, is nothing short of awful. Move Heroes simply refuses to register any quick-twitch wrist movements, so you’ll have to swing your entire arm in order to persuade your character to do anything.

You’ll eventually realize that the game only responds to the most deliberate commands, but even then, you’ll sometimes encounter a one or two second delay between thought and action. On several occasions, I found myself wildly waving my arm while my character sat and did nothing, and there’s no justification for broken and unresponsive mechanics when there are other Move games that make better use of the technology.

Yet despite those shortcomings, Move Heroes is still blisteringly easy. More often than not, I earned a gold medal on my first attempt at a stage – I even grabbed a couple of golds while I was literally unable to hold the controller – although I can’t really criticize the game for accessibility. Like most mini-games, the real challenge lies in the quest for a high score, and Move Heroes thankfully doesn’t use that as an excuse to withhold content.

The game otherwise looks all right – you’ll start out in Ratchet’s Metropolis before moving on to Jak’s Haven City and Sly’s Paris – but you’re never really allowed to explore so the level design amounts to little more than wallpaper. It’s style over substance, and it makes the licensing virtually irrelevant. Whether it’s Melee Rescue or Whip Survival, it always feels like you’re only playing an alternate edition of the same unusually repetitive mini-game.

Any character differences are similarly cosmetic. Jak, Ratchet, and Sly are functionally identical, and the same is true of Bentley, Daxter, and Clank. Each character does have one unique super move – Jak, for instance, can briefly turn into Dark Jak, while Ratchet can use a Groovitron – but you can only use such techniques after collecting a certain number of crystals so the power attacks rarely factor into gameplay.

Move Heroes does have a local co-op mode that allows a partner to collect power-ups and health for the primary player, but I only had access to one Move controller and the feature doesn’t work online. I was consequently unable to test the multiplayer, although I can’t say that I had any desire to play partial versions of games that are tiresome in full.

At the end of the day, a few noteworthy stars can’t save a game with horrible controls and no remarkable features beyond brand recognition. You shouldn’t even consider Move Heroes unless you’ve got kids, and even then, a competitive round of Wii Tennis is probably more engaging.

The problem is that while Move Heroes steals the IP of a big-budget Sony title, it borrows none of the gameplay conventions that made the original franchises so entertaining.
REVIEW SCORE
4
File Under: PlayStation, Ratchet & Clank