Another Repetitive Open World Only This Time With a Hint of 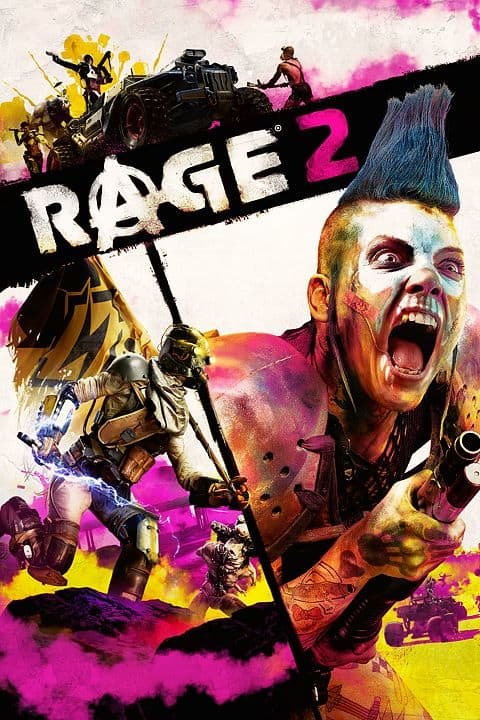 8 years after the original Rage, we are getting a sequel co-developed by Id Software (of Doom fame), and Avalanche Studios, best known for the Just Cause series, Mad Max, and recent stinker Generation Zero. Rage 2 does most everything a sequel should do, but still somehow feels dated and lacking any real stand out characteristics.

The movement and gunplay here are fantastic, surely thanks in no small part to Id Software. Pretty early on superpowers are unlocked that allow bolting around the battlefield, double jumping, and even floating a bit, all of which feels great, especially when paired with guns that feel as if they were basically ripped from Doom. The combat shotgun rips enemies to shreds or has an alternate fire that can push enemies over edges to their demise, for instance. The assault rifle has little to no recoil and easily stun locks enemies while tearing off their armor.

I could gush about how much fun each gun is to use, but that would oversell you, as Rage 2 is easily one of the most forgettable games I’ve played this year. There are so many open world games releasing these days and Rage 2 brings practically nothing new to the genre, nor does it do anything particularly well apart from the shooty bits.

Driving in the original game was repetitive, sure, but here it is downright dull. There’s loud engine sounds and practically no other audio while driving from location to location. The open world feels like a mostly empty desert, which I suppose is the point since it’s called “the Wasteland”
— but that doesn’t mean it’s fun or good. Apart from locations that specifically show up on your radar or map, the world is all twisty-and-turny roads that just aren’t fun to drive, and driving off-road is practically impossible thanks to all the garbage and debris spread about. Thankfully, there’s a flying vehicle you can unlock fairly early on in the game that makes flying in a straight line from point A to point B possible, cutting down the time it takes, but doing nothing to improve the excitement of travel.

Racing was a big part of the first game, or at least it was one of the more enjoyable parts for me. Here racing takes a back seat with events that seem few and far between spread out across the map.

Mutant Bash TV, the murderous game show — a kind of Family Double Dare meets guns — makes a return and is still one of the best parts of the game. Rage 2, just like its predecessor, is at it’s best when it stops trying to take itself so seriously and just lets the player have fun blowing enemies up in creative ways. MBTV is bigger, better, and even more over the top. Sure, the spinning gorilla of death makes a return, but now there’s a room with giant electric pendulums. While one of the best parts of the game, it’s also one of the smallest, unfortunately, as there only a handful of these missions currently.

Unlike the original, Rage 2 is single player only. There’s no online multiplayer or co-op of any kind to speak of which will surely be a bummer for some people. Honestly, it makes the game feel dated thanks to practically every other open world game including some type of multiplayer.

You’d think a game without multiplayer would be story heavy and have a focus on narrative, but that isn’t how Rage 2 rolls. The story here is basically a series of excuses to meet three main quest givers at the start with little to no narrative other than the typical work-together-to-stop-the-bad-guy-but-only-after-collecting-a-bunch-of-crap. There are a ton of little notes and lore to be found, but they don’t make up for the lack of a compelling story. If anything, the best characters and story beats come from the smaller side missions, presenting interesting characters such as “totally not a dunk on Elon Musk” and a famous and smoking old woman that hosts MBTV.

If you’re wondering if you should have played the original game before playing this sequel, the answer is no. You’ll appreciate the tiny nods here and there, but overall there’s practically little to no mention of the events of the first game apart from one character being related to another from the first game, which makes no difference at all in the grand scheme of things.

Graphically Rage 2 can go from beautiful vistas to dull hallways, tunnels, and sewers. Unfortunately, there’s a lot more of the boring than interesting here. Many walls and floors have textures that are so bland and flat they’re reminiscent of original Xbox games (or Crackdown 3), or maybe a budget title from the last generation.

Come to think of it, practically the whole of Rage 2 screams budget title. Like, I think I’d be upset if I spent full price on this. I completed the story in around 12 hours, which was rather easy from start to finish. Of course, it does that thing where each main factions gives you a couple of main quests, but otherwise, you’re grinding a few of their specific side quests to level them up to unlock their final quests. Then you have the final mission and are dumped back into the game to mop up whatever side content you feel the need to. If there are any major changes or things to do in post-game, I haven’t found them yet.

It’s no Skyrim, but Rage 2 has its share of bugs, though nothing totally game breaking. There are flickering lights and textures, so if you might be prone to harm from those, beware; while not all that common, it warrants mentioning. I’d have missed plenty of character’s lines if I didn’t have subtitles turned on, as characters voice acted lines would just not play at times. There was one instance where I was jumping in an elevator (aka the boring loading screens used throughout the game) and fell through the floor and underneath the map. Aside from that, there’s plenty of textures that don’t connect, or items floating in mid-air, which makes this look like another rushed and unfinished AAA release.

Rage 2 is the sequel the original Rage deserved five years ago, but today just feels dated and too little too late. Sure, it’s a lot of fun to use superpowers and the gunplay feels unmatched, but otherwise, practically every other open world game does more and better than Rage 2. Except Crackdown 3, but only barely.

Rage 2 takes Doom-like gunplay and puts in just another dull open world game that doesn't do anything particularly memorable.
REVIEW SCORE
6.5
File Under: