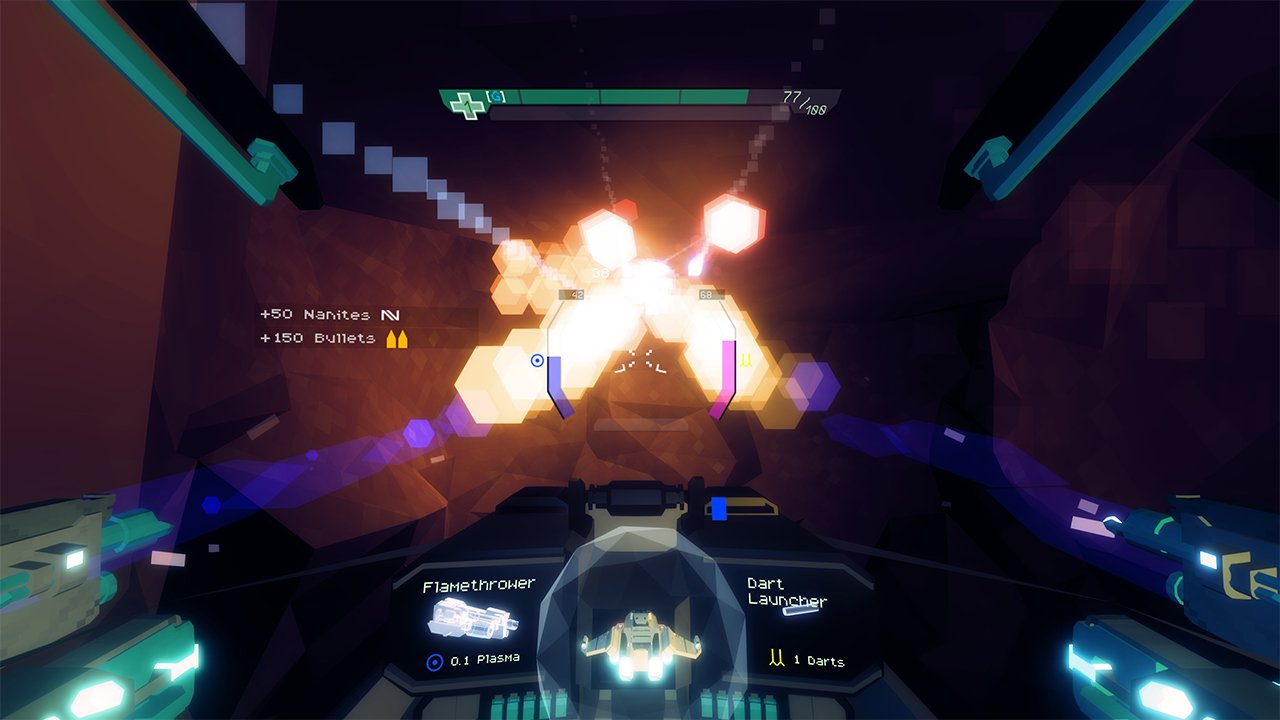 Roguelikes with randomly generated levels are easy to find these days, but games like 90’s classics Descent and Forsaken aren’t. That is where Sublevel Zero Redux comes in, combining the gameplay and controls of those retro classics with the current fad genres. For some of you, that knowledge may be enough to warrant a purchase, but you should probably know the wealth of annoyances to be found here.

First off this is a “six degrees of freedom” control scheme, meaning your ship can go up, down, left, right, forward, and backwards. You can also rotate it, and barrel roll it. If that sounds complicated, it is. In this newly remastered console version of Sublevel Zero the left stick controls movement, the right controls aim, and the d-pad controls height and rolling. The controls have a steep learning curve that will surely turn many players off.

That said, combat can be intense and hectic to the point I found myself panicking and pressing the wrong buttons. Changing the ship height seems necessary to effectively dodge many enemies attacks, but thanks to the left stick controlling movement that means deciding between going straight up and down, or navigating in all directions. This makes for some of the most awkward and uncomfortable controls I’ve experienced in some time.

While the levels are randomly generated, they are seemingly just pieced together from a selection of premade rooms. It’s disappointing to find rooms you recognize in your second playthrough, but here I found some of the same rooms in the very next level. As is often the case, random generation actually has the exact opposite intended effect and makes the game feel more repetitive instead of less.

Ships can equip two primary and secondary weapons at a time, allowing for quick swapping in combat. Extra weapons can be picked up and carried in hopes of using them to craft better weapons through a not-so-intuitive crafting menu. Crafting doesn’t make it clear if the resulting weapon will be better or worse, though there are colour coded numbers, I was never able to suss out exactly what the colours meant aside from red=bad.

The entirety of the game can be completed in just over two hours, but that is just one playthrough. As this is a roguelike, you’re meant to play it over and over unlocking new ships and content along the way such as ships, story logs, and information about enemies. If you don’t care about those things, then you’ll probably not find much value here.

Things aren’t all bad; the graphics are a nice mix of current and retro, almost like a modern day game with HD versions of PlayStation 1 textures. If that sounds like an insult, it isn’t, as it looks quite nice. The soundtrack is also retro-inspired chiptune that typically isn’t seen outside of pixel based games but it fits nicely here.

If it wasn’t obvious, I don’t love Sublevel Zero Redux. Basically, every part of the game aside from the audiovisual aspects feels weak or subpar at best. I’m sure a few nostalgic Descent and Forsaken fans will enjoy this, but if those outside of that niche I’d probably avoid this one

If you have a longing for another game similar to Descent and Forsaken, Sublevel Zero Redux is it.