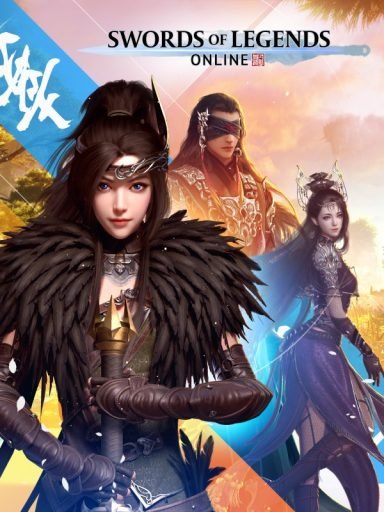 I’ve been dubbed the resident MMO girl here at CGM, a badge I usually wear with pride. World of Warcraft and Elder Scrolls Online have been on my PC for as long as I can remember, and now Swords of Legends Online sits among them. This is the first time since ESO that I have played an MMO at launch, but this time around, it was very, very different.

SOLO originally released in China in 2019, and just made its grand appearance in the west earlier this month. I was excited to jump in, and dove head first into the beta. It was a bumpy road with awkward translation, but overall it was beautiful and engaging—everything I want in an MMO. That still remains true now that the game has gone live, with a few more ups and downs added to the experience.

Reviewing a base MMO under regular circumstances is no small task. There is questing, levelling, dungeons, raids, pets, gearing, customization, UI’s and more to think of. That is all true with Swords of Legends Online, but this time we are starting from scratch, with no previous understanding of the game. It would take months to really experience all there is to see. For the purposes of this review, we are going to look at getting familiar with the massive MMO, and how things feel from the point of view of players brand new to SOLO.

The biggest issue with the game is the overwhelming amount of information thrown at you from the second you load in. Further down the road, I’m sure this will be a plus, but as a beginner just learning the rules of the road, it’s really too much to take in all at once. Usually, a new launch of an MMO will come with limited content, and as time goes on, added expansions and options become available. Because Swords of Legends Online has been a game in the east for years, it came loaded with content, menus and customization, with no simple way to ease into it.

“Because Swords of Legends Online has been a game in the east for years, it came loaded with content, menus and customization, with no simple way to ease into it.”

Jumping into an MMO, you usually have access to guides and veteran players to help direct you. It’s really a community experience, and it’s one of my favourite things about playing MMOs—you’re never alone. Unfortunately, with Swords of Legends Online, this doesn’t ring true. The game does provide you with tutorials and instructions—though they aren’t accurate if you use a controller or key binds—but if you happen to dive into any menus you haven’t been introduced to, it’s very easy to get lost—or manage to switch gear sets and lose your weapon, something that hits close to home.https://72fc8250e1d59b7ceea25ae7336b653b.safeframe.googlesyndication.com/safeframe/1-0-38/html/container.html

Because the game is new to the west, there are very few guides, posts or walkthroughs to help you answer any big questions, which is fair. It’s a game and players should be trusted to figure things out in their own time. My issue with this in SOLO, is that for a community experience, you aren’t permitted to speak in chat for a long period of time when starting the game. When you finally hit beginner 10, you may join an Alliance (guild), and speak to those people, but you still can’t speak in World Chat, when you try you get a polite “You still haven’t received any Chat level. You are not authorized to post in the channel World.”

“SOLO’s costumes, locations, use of colour, adorable pets, music and even the menus are hard not to love, and each new area I end up in brings something fresh to enjoy. “

This is hard when starting out as you are usually lost, confused, or looking for friends. If guides were more available, this may not have hit so hard, but I spent a solid half hour stuck in Blueprint 2 (a different gear set), not even knowing they existed, and couldn’t access a weapon. Again, a silly mistake on my part because I started poking around in menus I hadn’t been introduced to yet, but there are so many, I would be shocked to find people who didn’t do something similar. An MMO is a Massively Multiplayer Online, that isn’t as much fun without the Multiplayer part.

As I’ve said before, SOLO is absolutely stunning. The gorgeous scenery and flowing gowns paired with the incredible character customization would be reason enough for a substantial player base to stick around. I thought games like ESO were beautiful, but they have nothing on this. SOLO’s costumes, locations, use of colour, adorable pets, music and even the menus are hard not to love, and each new area I end up in brings something fresh to enjoy.

The same goes for the cutscenes, which SOLO can’t seem to go ten minutes without. But although they’re beautiful, this is where a lot of the dialogue issues come into play. The game has been dubbed in English, so I fully expected some awkward mouth movements. What I didn’t expect were characters talking over one another, and starting their lines mid-sentence to finish with the beginning of the subtitles. Every once in a while you’ll find a small section of dialogue that still isn’t dubbed in English as well. https://72fc8250e1d59b7ceea25ae7336b653b.safeframe.googlesyndication.com/safeframe/1-0-38/html/container.html

“Most MMOs have you hunting down rotations on sites like Icy-Veins, so this is a refreshing change of pace and one of the areas I find SOLO excels.”

There is definitely some work to be done with dialogue. You’ll find plenty of scenes where the subtitles describe what is happening rather than actually animating the actions as well, “You shake your head in disbelief”. It’s an odd system, so make sure you’re reading along, or you may miss some small pieces. The story is interesting and engaging, though the next play through I will likely skip the conversations to speed up levelling. There are so many cutscenes and so much dialogue. It may even be more monotonous than the “run here, kill this, run back,” quests, which there are plenty of.

That isn’t a drag at the game, the beginning of every MMO is similar. Those tedious tasks are there to teach you movement, skills and generally how to play the game. As you move through the levels, quests become more complex and engaging with new areas to explore. I enjoy that the game has a training area where you’re better introduced to your skills, when to use them, and how to make combos. Most MMOs have you hunting down rotations on sites like Icy-Veins, so this is a refreshing change of pace and one of the areas I find SOLO excels.

SOLO also walks you through dungeons in a similar fashion. You are sent in with two NPCs to fight your way through, teaching you the basic lay of the land before you dive in with real players who fully expect you to know what’s going on the second you step in. It’s a great system for players new to SOLO and new to MMOs in general. Grouping up with real players can be intimidating when you’re new, so these training wheels are welcome.

“As you move through the levels, quests become more complex and engaging with new areas to explore.”

Once the training wheels come off, you’re left to grind. Whether it be dungeons or questing, finding your way to max level is tedious, but I find that to be true in most MMOs—though SOLO’s number of cutscenes make this feel like an eternity. What you find at the end of your dragged out journey is an adequate MMO buried under a lot of overwhelming learning.

Endgame in Swords of Legends Online offers you housing, dailies, PVP, raids, dungeons, collections and world bosses, not to mention the replay value of all the character customization. The levelling process to get here focuses on preparing you for battle, however, once you max out, the difficulty ramps up. I skated through the game up until this point, rarely finding battle much of a challenge, only to find myself surprised when I finally started making use of spawn points after dying.

I spend most of my time playing MMOs on my own these days, as real life tends to make me pause, and that isn’t possible in raids, dungeons or PVP. Grinding dailies and world bosses seemed to be the way for me, and I was worried that I would find SOLO tedious without the sense of community that comes with that group content. I enjoyed the grind in this case, and could see myself coming back to the game to pass time this way, even just to look at the beautiful scenery.

Swords of Legends Online isn’t breaking any barriers with its gameplay or endgame content. It very much follows the standard MMO format—learn, grind, max level, grind. Though it was a staggering amount of information to take in, SOLO is a very in-depth game when all is said and done. If you can fight through the monotony of levelling, and the awkward glitches and translations, you’ll find yourself on the other side with plenty of content to keep your interest, and a stunning setting to continue the grind.