Tell Me Why (Xbox One) Review

Ain’t Nothing But a Heartache 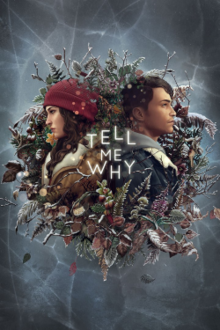 Tell Me Why is a game about the complexities of feelings around family and the personal tinges we bring to memories we felt we once understood. It’s about the connections between siblings and loved ones, as well as how little we may know about the people who raised us despite the time we spend with them. It’s a game that covers many topics with grace throughout its short play time, and despite some issues with predictability and some flat voice acting/dialogue, it’s a journey well worth taking.

Tyler and Alyson Ronan are being reunited for the first time in years after Tyler had be sent away over killing their mother, Mary Ann, in self-defense. These twins are tasked with packing up their childhood home for sale so they can both move on, but as they start digging through their old life, they begin to find things that hint that the past they wish to put behind them isn’t what they thought it was. Now, they feel compelled to piece together the truth despite a town filled with people who seem to want to keep it from them.

Figuring out this mystery is done through a number of tools you have. Plain old detective work may give you some of the tools and leads you need to figure out who to talk to, but prying the information out of most people requires some information that’s hard to get. Handily, the twins have an ability to recall memories from their past, watching them play out in the world in front of them. These events often contain the clues you need to press people for information or figure out where to go, and make for an interesting visual connection between past and present in the game’s locales.

That said, memories are strange, untrustworthy things at times. Many different things can tinge our memories, much as we may think they’re objective snapshots of our pasts. Tell Me Why explores this by having each twin remember certain situations in different ways, asking you to decide which you feel is real. These cause situations to play out in a unique way, loaning them a real narrative weight and getting the player involved in what they feel is the real story. It gets the player critically thinking about the story and characters, even if it is really just a choice between narrative routes. I felt more involved in figuring out what I thought was real in the story because of them, though, and highly enjoyed their inclusion.

Without spoiling the story, this sense that the past isn’t what the twins think it is, shows the ways in which we feel that we fully understand people and events without really examining them. We often accept our own perspectives as the correct one, even if we really haven’t looked into those thoughts, memories, and feelings from other perspectives. It also shows that we may come to certain conclusions about people, especially our loved ones, without really knowing who they are. It stands as a warning against such behavior, asking us to look deeper at those we care about before we complete our judgements of them.

In exploring the twins’ past and their connection with one another, we listen in on a great deal of dialogue between the two. Tell Me Why seems to falter a little bit here with some strange choices of phrasing and moments that fall flat between the two. I didn’t feel much of a connection between the two despite them apparently being so close that they can speak telepathically and revive past memories to live out. Then again, the twins had been apart for a decade, and being away from a loved one for so long could make things awkward when they got back together. So, in some ways, the awkwardness of the dialogue enhances a sense of realism in their strained connection, but in another, it seems like the game wants me to feel that they’re close when their dialogue doesn’t feel that way.

What does feel intimate and close is the striking Alaska town they live in. The game sticks to a handful of small locales, making the player feel at home in this place. The corner store, the warm home – it all gives this sense of coming back home to a small town, and all of the weird memory baggage that comes with it. Through showing us the twins’ memories in these places, you can feel the power of their long history with them, and the ways in which bad and good memories reshape physical places in your mind. Plus, there’s some really nice views while you’re here.

The one person I felt a great deal of empathy in this return home was Tyler. Tyler, a transgender man, transitioned while he was away from this place, and is returning as his true self for the first time. I felt a terrible anxiety for him every time the game had us speak to one of the old men and women of the town, waiting for the cruelty and hatred to come his way. I braced each time, expecting the game to go into some hateful diatribe in favor of showing a “realistic” view of the world.

While there is hate for him in places, Tell Me Why often showed people struggling their way through acceptance, but at least trying to show what felt like genuine, if terribly awkward, support. As a male-identifying cis fella, please take my opinion with a grain of salt, but to me, the game felt like it was showing a world attempting to be better towards transgender people. A world that could be insulting or degrading in its attempts, but at least trying, rather than showing people being outright hateful for the sake of “realism.” It was pleasant to see something hopeful in this regard, as, in a world so short on hope for a better tomorrow, our stories can demonstrate a better world to strive for, especially for us cis folks trying to make things better for our transgender friends and loved ones. We have a lot of work to do to even get where this game is, but we need to keep pushing.

Tell Me Why can be a bit predictable in its storytelling, and its twin connection can be a bit strained (which can be good or bad, depending), but I think the way Tell Me Why explores the complexities of memory, the difficulties of knowing our loved ones, the challenges of coming home again, and a world that can be better (if only a little) for our transgender loved ones make it a game worth experiencing.

Tell Me Why’s exploration of the complexities of memory, the difficulties of knowing our loved ones, and a world that can be better for our transgender loved ones make it a game worth experiencing.
REVIEW SCORE
8
File Under: DONTNOD Entertainment, Xbox