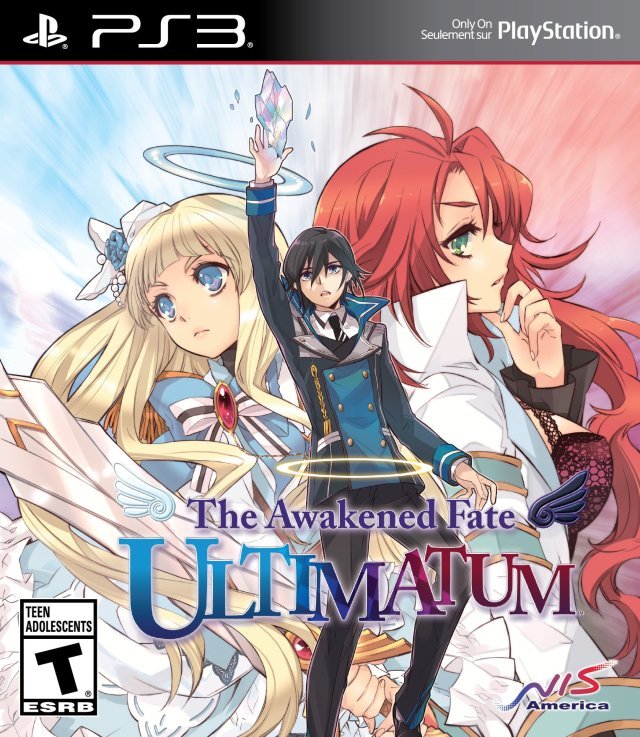 When you begin The Awakened Fate Ultimatum you find the main character, Shin Kamikaze, narrating his own life and by his own admission, it’s pretty sad. A loner, Shin finds solace in seclusion and he truly prefers it that way. Imagine his surprise when winged devils descend and attack him and he is protected by a beautiful angel who arrives just a little too late; Shin is killed by the devils. Luckily, the angel manages to fly Shin to Celestia where he is implanted with the Fate Awakening Crystal and resurrected. Even more to his surprise, the Crystal has turned him into Celestia’s god – their ultimate weapon to help them finally overcome the devils in their eternal war.
To help Shin coming into his powers and to cope with his new status of ‘God’ are angel warrior Jupiel and devil scientist Ariael. In order to save Shin and activate the Fate Awakening Crystal, Jupiel and Ariael gave a piece of their soul up and are physically and mentally connected to Shin. For every choice that comes to Shin throughout the story he, quite literally, has an angel and a devil on opposite shoulders telling him what to do.

The gameplay is split into two avenues. The actual game is a classic dungeon crawler where you have a limited number of items and a limited amount of energy and health to navigate the various labyrinth’s that represent each mission. You can choose to explore the dungeon in its entirety and get maximum experience and pick-ups at the risk of dying and losing everything, or you can choose to find the exit to the next level and clear the dungeon as fast as possible.

The second part is the RPG element of the game and where the term Ultimatum comes into play. You’re dungeon diving will allow you to level up and acquire skills and increase your stats to allow you to continue through the game. However, you are also tasked with choices to make and deciding one way or the other will also give you Angel or Devil points to further increase your powers on either side. In the dungeons you are able to switch between an angel’s and a devil’s powers to help you better combat either devil or angel enemies that you run into while you explore. As an angel your are more effective against devils and vice versa. Your choices will not only affect the story, but it will also you give you extra skills and power ups when you are one or the other. I ended up far more powerful as an angel in my game and thus began to fear running into angel enemies while in the dungeons.
The gamble in Ultimatum‘s dungeons is that while it is possible to zip through them as quick as you can, choosing to fully explore them results in far better weaponry and pick-ups than you would find in the store as well as giving you substantial amounts of experience to level you up. However, dying in the increasingly difficult dungeons will result in you losing everything on your possession for good and that could mean setting your gear back by a lot. This is what keeps the dungeons challenging as you progress through the game. It’s always a numbers game as you balance, health, power and movement to try to maximize exploration without getting stuck or killed.

However, the big downside to Awakened Fate Ultimatum is that the dungeons end up being little more than interruptions to having a manga voice acted for you. The story unfolds as the characters stand on screen and talk to one another and you can read Shin’s inner monologue. While the story is interesting to begin with, it quickly devolves into the same old character tropes we’re all accustomed to from watching anime and reading manga. Additionally, Shin Kamikaze is a terrible protagonist as he whines his way through the story, taking time to complain and belittle every choice you make, regardless of the outcome. With the story making up the majority of the game and choice being so integral to it, having the story go stale quickly and making the response to your choices so obnoxious really detracts from the game.
Ultimately, The Awakened Fate Ultimatum ends up being a pretty decent dungeon crawler that gets bogged down by a cumbersome story and poor lead character. Challenging dungeons and okay RPG elements are overshadowed by the domination of a mediocre storyline presented in an incredibly pedestrian manner. I know the series has its fanbase, but I can’t help feel that this entry to the genre will be overlooked and quickly forgotten.

However, the big downside to Awakened Fate Ultimatum is that the dungeons end up being little more than interruptions to having a manga voice acted for you.
REVIEW SCORE
5.5
File Under: Anime, Dungeon Crawler, Manga, NIS America, PlayStation, RPG