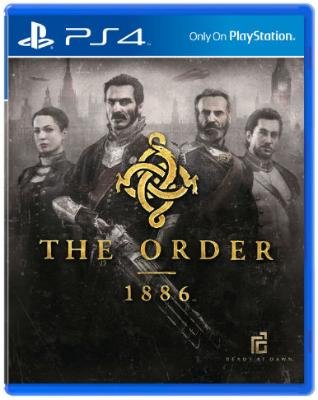 Ready At Dawn may not have great storytellers, but it’s clear that their technical team is one of the best in the business, easily standing shoulder to shoulder with Naughty Dog or Sony Santa Monica. The Order is, bar none, the single best looking game of this console generation so far. Nothing else on the PS4 or Xbox One is as absurdly good looking as this game. It’s the first game to successfully achieve the dream of in-game graphics finally looking like pre-rendered cut scenes. Framerates rarely stutter, anti-aliasing is astonishing, and the light is simply the best it’s ever been on a console to date. High dynamic range lighting is in full effect, with light refraction accurately rendered even on humble tile floors.

There’s a price to pay for all this visual splendour, as the game is permanently set to a 16:9 aspect ratio with black bars on the top and bottom to save on processing power. This is demo worthy presentation for the PS4, and it’s going to be THE game that retailers and tech-nerds use to show off the power of their gear. The audio is not quite as majestic, being more workman-like in usage. Sure, the subwoofer will get some rumble here and there, but rarely is surround soundscape used to good effect. Sadly, the same can be said about the actual game itself.

In a sense, The Order’s biggest problem, what really stops it from becoming an all-time classic—or even just one of THE games to own for 2015—is that it is a jack-of-all trades and master of none. In pursuing the Holy Grail of gaming, a “cinematic experience,” Ready At Dawn have crammed a lot of features into the game calculated to propel the player along in the “movie” they are playing, rather than feeling good in and of themselves. Gears of War wanted to be a shooter first, with the feeling of being a “bad ass action star in a bad ass action movie” being a distant, secondary concern. The natural consequence of that was the game was designed around making the shooting feel as good as possible and giving players a wide range of shooting activities. Ready At Dawn seemed more caught up in what the player would feel like after the experience was done, rather than worry about the quality of the experience itself. The result seems to be a design ethic of “good enough” rather than great. So while the game is never broken, and never even feels dull, neither does it ever shine with an unforgettable moment of “I can’t believe I actually survived that.”

The Order is going to be many things to many people. For gearheads, this is the ultimate tech-demo, one guaranteed to blow away an audience when shown for the first time. For the hardcore shooter crowd, it’s an obvious clone of better shooters that never quite shoots as well as its inspirations. For a more casual gamer that is looking for short burst of action with intrigue, and isn’t quite so obsessed with how innovative a title is, or how original its design philosophy, it’s a rollercoaster ride through a truly original world that mixes up steam punk and shooting in a gorgeous, distinctive way. The Order: 1886 is not masterpiece, except in the technical sense, but it does provide a good—albeit short—time for people that just want to shoot things in a beautiful looking world. If Ready At Dawn gets a second chance, perhaps the sequel will fulfill the narrative promise of the first game, but it should really polish the existing mechanics to get them to shine instead of merely be “okay.”

To read Wayne’s extended review of The Order: 1886, pick up the Feb issue of CGM.

The Order is, bar none, the single best looking game of this console generation so far. Nothing else on the PS4 or Xbox One is as absurdly good looking as this game.
REVIEW SCORE
7
File Under: PlayStation, Shooter