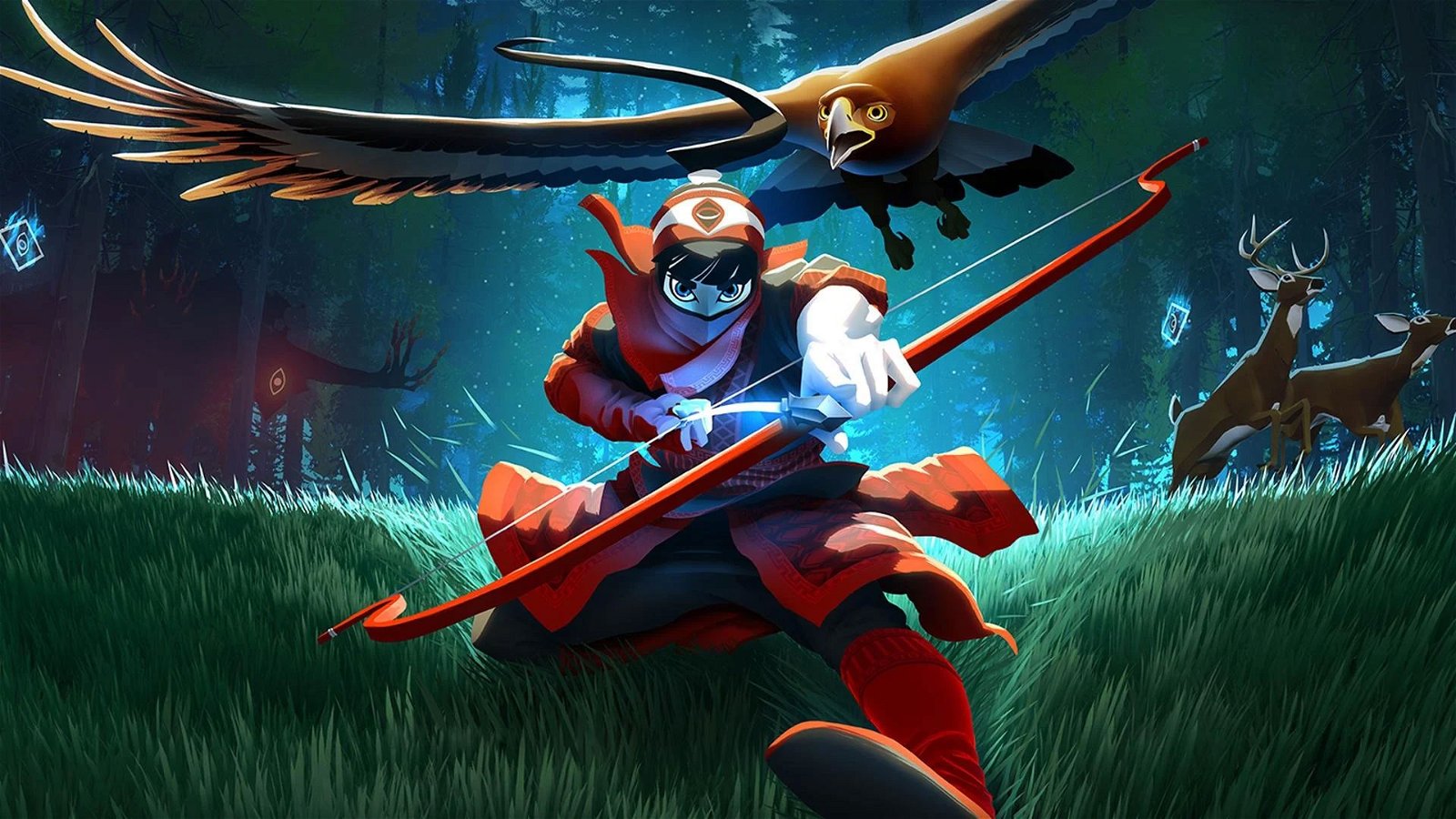 The Pathless is an action-adventure game which comes in the wake of indie darlings such as Journey and ABZÛ. In fact, the three games all share some of the same talent: Journey art director Matt Nava formed Giant Squid in 2013 which then went on to release ABZÛ in 2016 and now The Pathless in 2020.

It is important that I now mention that Journey is one of my favourite games of all-time. I am absolutely in love with everything that game has to offer: the stunning presentation, the master-class soundtrack from Austin Wintory, the intricate yet subtle backstory and the fluid gameplay. So then, since The Pathless at least reaches for the same exact things, I naturally expected the game to be a winner for me. I also expected it to add something new to the formula and reinvigorate it – especially since ABZÛ came out all the way back in 2016 and since The Pathless was one of the handful of games that had a next-gen version ready for the launch of the PlayStation 5.

However, beyond the shine of being one of the first real next-gen games I’ve played so far, I’m disappointed to report that The Pathless ended up being less compelling than either of its spiritual predecessors.

Having played The Pathless on a PS5 I was first confronted with deciding whether or not I wanted to prioritise higher frame rates or higher graphic quality.

My take is that for a game like this, which prioritises movement and quick inputs above everything else, performance mode is an absolute must. Nevertheless, I am tremendously grateful to even be given this option: choosing between modes is the most immediate and most significant difference between the PS4 and PS5 versions of the game.

The first thing that struck me about playing The Pathless was the presentation. The game boasts a gorgeous minimalist acrylic art design which is astonishing even in motion. It is truly a visual spectacle to traverse the game’s different plateaus and to notice how the trees shake, the rivers whirl and the snow crunches as you pass them by. Austin Wintory’s rather subdued soundtrack accompanies the visuals to create a fairy-tale world which is both serene and menacing.

As for the story, The Pathless has you play as the Hunter, an archer tasked with cleansing the corruption that has desecrated a gorgeous natural world ruled by The Tall Ones – creatures which were once gods of these lands but which have now been subjugated and cursed by the malevolent Godslayer. The main quest of the game, as such, is to track all of the beasts through the areas of the map that they respectively control, restore them to their usual selves and have them support you in preventing the Godslayer from bringing an end to the world. And whereas it is fine that the premise is rather simple and familiar (the game is choke-full of unfavourable Breath of the Wild comparisons ) the problem is that the story never gets any interesting – it is precisely what you would expect from a world torn by a conflict between good and evil. The worldbuilding, too, fails on a fundamental level: the parchments and the various notes spread across the vast landscapes are never interesting to seek out and then read. The result of all of this is that the world of The Pathless feels incredibly empty. This all being said, I appreciate the overall themes that the story is concerned with: the connection that we all have to nature and the importance of individuals carving “their own path to truth or salvation”.

Speaking of carving your own path, The Pathless’s main gimmick is that it is an open-world game with no map and no HUD elements that show you the way. In addition, enemies would often track me down along the map, which often forced me to change directions. And yes, on paper this sounds ingenious, but…the result is far from revolutionary. This is partly because other elements of the game undermine the freedom that the designers are trying to grant players. For example, the Hunter has access to what is basically Witcher Vision – and is as such able to see points of interest from a distance. Furthermore, the open-world towers made infamous by Ubisoft games are also present here. This is disappointing because it means that the only changes to the open-world formula that The Pathless comes up with are aesthetic. Functionally, nothing else about how I usually play open-world games is different here – it is just more inconvenient like this. For example, it was a mere inconvenience that the enemies had me chart a different path rather than being something to make me play the game in a drastically different way.

Instead, I was more impressed by how good it felt to be playing The Pathless. I mentioned earlier that one of the penchants of Journey and ABZÛ is the fluid gameplay and The Pathless takes that idea and, well…runs with it. You see, the world is littered with targets called ‘talismans’ which, when shot with the Hunter’s bow and arrow, slowly build up a sprint meter. This combination of shooting targets and sprinting about makes for an exhilarating gameplay mechanic that is more reminiscent of rhythm games than anything else because the Hunter’s speed and momentum is greatly dependant by how and when you shoot talismans. Paired with the DualSense’s haptic feedback, nothing else that The Pathless throws at you ever feels as good as dashing across lush fields of grass at high speeds: traversal in general is truly the game at its best. This gameplay mechanic is made even better by the fact that the Hunter is joined in the journey by an eagle which grants the ability to jump higher and further and even to glide.

Unfortunately, The Pathless never truly expands on this gameplay loop. As captivating as it may be, the gameplay loop of hour one is nearly identical to the gameplay loop of the post-game. This made it so that at the end of the about 8-hours long campaign, I had long stopped having fun. The only thing that had changed for me gameplay-wise was the fact that I was now able to jump about five times or so, which did not make the game inherently more interesting; it just made it easier. Repetition is a problem with The Pathless’s puzzles and boss battless all the same.

Beyond talismans, parchments and enemies, the world of The Pathless is also filled with a stupendous amount of puzzles. Initially, I thought these puzzles to be really fun to engage with and quite cleverly designed. However, they slowly lost their appeal. Hours into the game I realised that beyond progressing the main story, there is no good reason to track down any one puzzle. This is because the only reward for completing puzzles are these gold crystals which will eventually make it so that eagle can flap its wings more than once at a time – which is how the Hunter herself can jump more than once. Though, as aforementioned with these extra jumps, they are at best nice to have and at worst simply unnecessary. Other than this, the puzzles were too repetitive to be fun in and of themselves: I can’t think of why, save for completion purposes, anyone would go out of their way to solve them all.

Similarly, the boss battles that The Pathless throws at players are visually impressive and mechanically arresting…but only the first time around. This is because the sad reality is that all of them look and play out virtually the exact same – if you’ve defeated one cursed beasts, you’ve defeated all of them. I was truly disappointed by this because I loved my first boss encounter: having to chase a giant enemy through fire and debris is a standout moment. But then, having to go through the motions again and again really dampened that moment for me.

On the one hand, due to its repetitive gameplay and failed attempts at shaking up the open-world game formula, The Pathless is a disappointing spiritual successor to Journey and ABZÛ. On the other hand, as a sample of what the PS5 can do, for its presentation and the exhilarating traversal, The Pathless is a welcome and good addition to the console’s library of launch games.

The Pathless is a gorgeous, exhilarating and frenetic game which unfortunately often stumbles in its own tracks. 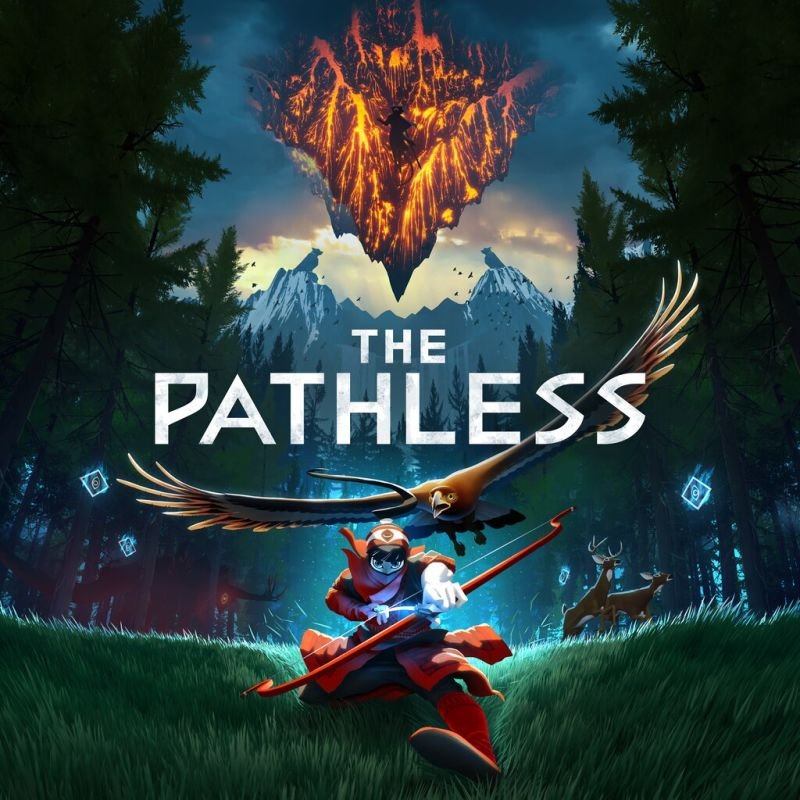