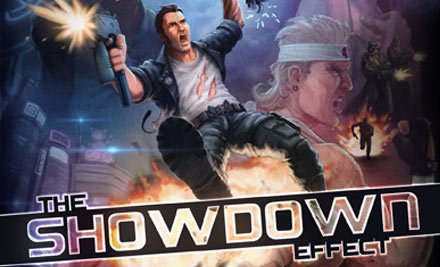 What happens when you take the best parts of 80s action movies and throw them in a blender with fast paced multiplayer and over the top violence? Chances are you would end up with something like The Showdown Effect from Arrowhead Games. The Magika makers have traded in Norse mythology for the dazzling neon of the 1980s in their new 2.5D side-scrolling shooter. Since this game is supported with microtransactions rather than DLC it leaves me to question whether this game should have been released as a free-to-play title rather than carrying the $9.99 price tag.

The Showdown Effect has a unique take on multiplayer shooters. Since all the action is taking place on a 2D plane it requires a unique control scheme. You fire by moving your mouse over the target and then pulling the trigger. This seems easy enough but given the rapid acrobatic movements of your opponents it is easier said than done. The movement is a big part of the game, you’ll find yourself back-flipping around the 2D maps, jumping from level to level as you hunt and are hunted by your opponents. In addition to the gunplay using melee weapons is also a viable tactic. With your melee weapon equipped holding the right mouse button allows players to block incoming fire giving them a chance to escape or reposition for a counter assault. What I liked about TSE was that the matches are quick and digestible. I also felt like I was earning my experience rather than just being handed it with an accompanying heavy metal overture. There’s a few different match types but not the myriad of modes found in games with bigger budgets. TSE features four basic match types, my favorite of which is the Showdown mode. Showdown is your standard free-for-all deathmatch which turns into a last man standing competition as the match comes to a close. It makes for some bloody bullet battles, ridiculous moments, and really showcases the fun to be had with this title. Those four match types can also be customized by changing the rulesets. You can make a match pistols only or allow for things like infinite ammo, which will definitely keep things interesting.

Despite the game’s unique take on multiplayer shooters, I can see how there isn’t much to be found in TSE that will resonate with gamers long term. At launch there’s only four maps in two different settings, so playing the same maps again and again can get tedious. I also found the level progression to be on the slow side, which will make it hard for gamers who are accustomed to the instant gratification found in other shooters. I enjoyed earning every ounce of XP but I don’t think that gamers these days have the patience to give TSE the time it deserves. It’s unfortunate but I feel that it’s the truth. I think that TSE would fare much better if it were released as a free to play game monetized by microtransactions. The microtransactions are already there but I feel that the $9.99 is too high a barrier of access for a game with so little content. Although the small amount of content that is found in TSE is funny, unique, and well crafted. The developers at Arrowhead Games Studios have a great sense of humor and it shows in The Showdown Effect.

The Showdown Effect has a unique take on multiplayer shooters. Since all the action is taking place on a 2D plane it requires a unique control scheme.
REVIEW SCORE
7
File Under: Multiplayer, Paradox Interactive, Shooter