Tokyo Twilight Ghost Hunters is one of the many criminally overlooked gems in the Vita library. While it’s a far from perfect game, and against typical gaming conventions by design, there’s nothing quite like it out there. It’s a weird game that revels in its own idiosyncrasies, breaking conventions of how you’re “supposed” to make both visual novels and role-playing titles. As a sucker for anything weird and “out there,” it carved out a little spot in my heart when the original release hit last March.

With Daybreak Special Gigs, an expanded re-release, I was surprised to not just get more of the same. While the core narrative remains—outside of an extra new chapter—Toybox’s revision can be seen as a director’s cut of sorts. Some characters get more exposition and internal monologues, which made me care about them more. For example, Sayuri, a character who’s been haunted by ghosts her whole life, gets standalone sequences of flashbacks that I don’t recall being present in the original. Little flourishes like this make the cast feel less cookie-cutter, and the narrative feel less like a vehicle for your self-insert protagonist.

That narrative is the primary draw of the game, as you’ll spend most of your time scrolling through text. Tokyo Twilight Ghost Hunters essentially amounts to an episodic ghostbusting story, with the protagonists finding new haunts each episode, learning new backstory, and going in for the kill—erm, capture? The cases are gleefully campy and macabre, from vengeful fiances to wrathful rockers, and the characters manage to feel authentic and relatable throughout each “episode.” Peppered with references to Ghostbusters, X-Files and even Supernatural, the plot is strange love letter to cheesy horror media that I love, and by consequence I love the end result. 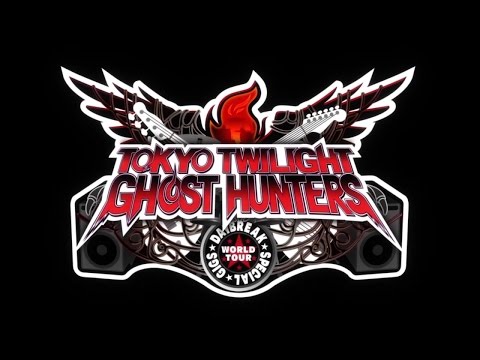 What some people might not love, however, is the way the story progresses. While it’s technically true that Tokyo Twilight Ghost Hunters is a visual novel, it also doesn’t play like any other visual novel on the market. Outside of certain actions, there aren’t actually any dialogue choices per se. Instead, players progress through the story by navigating two separate wheels—one with emotions, the other with body parts. For example, a “fist” coupled with “hand” means you express anger; a “heart” with a “hand” means bad touching on another character. At least sometimes, because both those things can produce totally different results in different circumstances. The game doesn’t actually explain how the wheels work, leaving players to determine the best way to use them. Personally, I love the system for being an intentionally obfuscated puzzle and for forcing players to think about their response, or if they even want to respond. However, some people might not appreciate how complicated it is, preferring a more traditional system.

The same can be said of the combat, which you’ll have to experience once or so during the thirteen episodes. In theory, it’s a grid-based strategy game. In execution, it’s a bizarre hybrid of turn-based RPG, trap-laying, and straight-up guesswork. Players use a map, which they lay traps on before battles, to pinpoint the location of the main spectre (there are other, weaker ghosts on each map.) From there, they try to figure out the ghost’s movement pattern, hope it stumbles into a trap, and try to plan your attacks one or two turns in advance, hoping they hit. It’s frustrating at times, but it’s also sort of a refreshing break from role-playing conventions. For those put off by the “guesswork” portion, Daybreak Special Gigs alleviates some of the original’s frustrations. The game automatically sets recommended traps for you, and characters can now take more than one action per turn. While this makes it significantly easier, it also makes it simpler for people to get back to the visual novel portions, which are the highlight of the package in my opinion.

Aside from the new narrative content and tweaked gameplay, the rest of Tokyo Twilight Ghost Hunters is the same. The same wonderful score, the same gorgeous animation, the same evocative art direction—it’s the same charming, weird little gem it was to begin with, just a bit more polished. It’s still not for everyone, and I suspect some people will outright hate it for being so “out there,” so to speak.

Yet I still can’t help but admire Tokyo Twilight Ghost Hunters, especially with the refined Daybreak Special Gigs release. As someone who loves oddball visual novels, like Lux-Pain and Time Hollow, Artbox’s supernatural romp is a slick, clever title that’s unashamed of being different. In a market of conformity, I’ll take that over a cookie-cutter open-world game any day of the week.