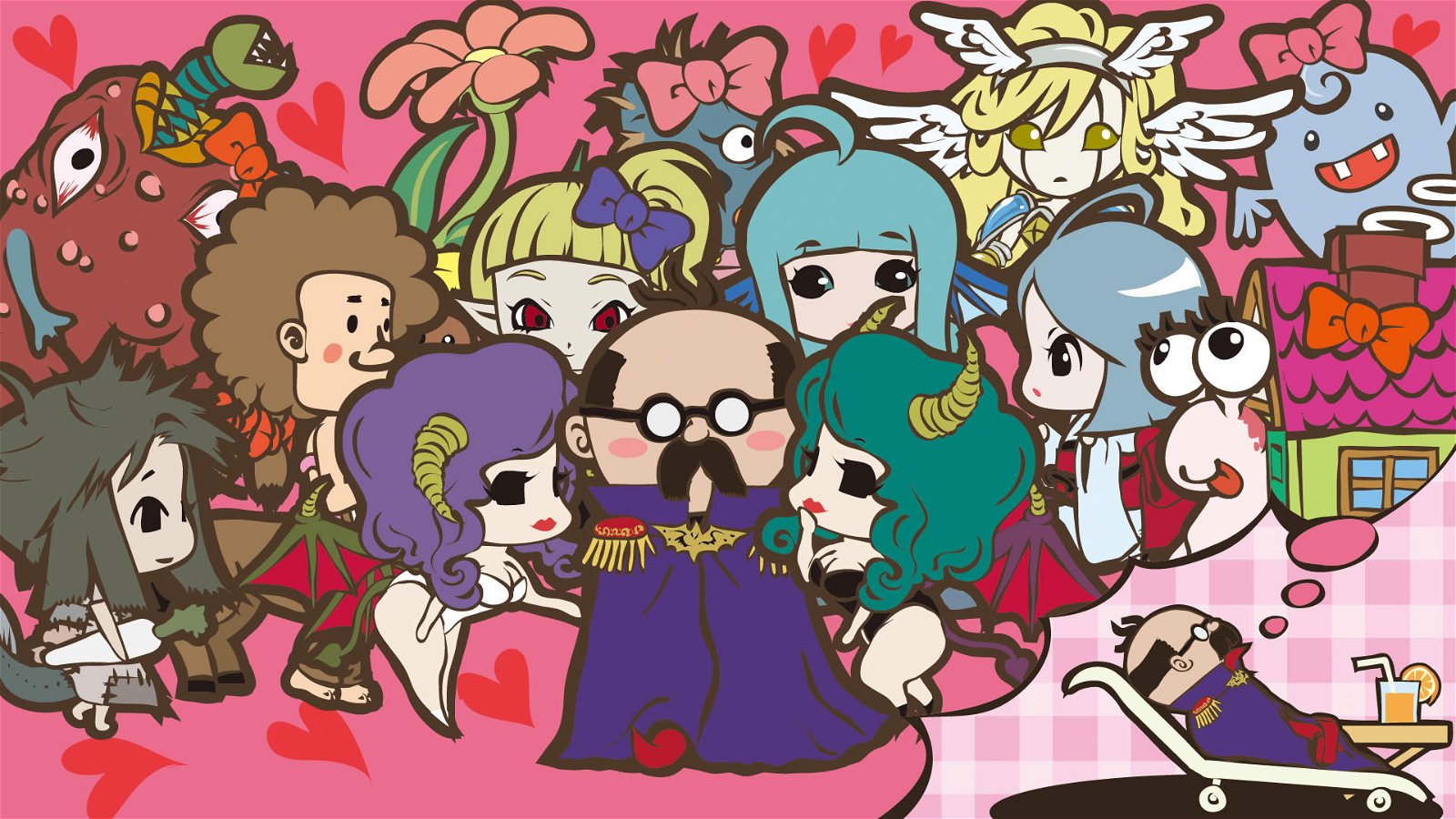 I remember being very interested in Tomodachi Life when it first came out, but I never got around to playing it until I was swept up in the fervour that was Miitomo (which I maintain is still a lite version of Tomodachi Life.) While managing an apartment filled with my Miis and watching their quirky shenanigans was fun for a little while, there was never any real gameplay to keep me invested, and now I lament the purchase. Unholy Heights feels like the game I should have purchased back then, being one part Tomodachi Life, one part Fallout Shelter and all parts fun!

In Unholy Heights, players take on the role of the Devil, who, as the game states, spent his life savings on a place in the projects. Global domination is the name of the game, but the Devil has to start small; attracting monsters one at a time to live in his complex until his army is large enough to deploy.

Unholy Heights plays fairly simply. Players will manage their apartment complex, await potential monsters to take up residence and then collect rent on a daily basis. The game allows for three speeds of progression that players can adjust on the fly, providing them with the option to choose the speed at which the days move.

As monsters move in, you’ll not only need to make sure their apartments are in top form, but also provide them with items they may want. Keeping residents happy is vital as it ensures they pay their rent fully and also affects the Devil’s standing with them. It doesn’t end there. Monsters have particular needs, affinities/contempt for other monsters, and other factors that will increase or decrease the Devil’s standing with them; reading the Bestiary is crucial to understanding the 20 different types of unlockable monsters, and keeping Unholy Heights running smoothly.

The game isn’t just watching the days go by and the rent money to up; the human residents of Unholy Heights aren’t particularly thrilled that the Devil is attempting to amass an army of monsters, and will periodically come to attack his apartment before making off with a portion of his money. Players will have to call on residents to defend the Devil and this is where a decent amount of strategy comes into Unholy Heights. Players must choose their strongest monsters to repel incoming attackers using a combination of melee and ranged attacks, as well as selecting when residents should attack or retreat to their rooms to avoid death. A clever Devil might send a melee monster to tank while a magic monster deals ranged damage, or wait until humans are deep into the apartment before calling on residents to try flank enemies.

Players can also take on “quests” listed on a nearby message board, which usually involves defeating waves of multiple humans for big cash bonuses. Time management is also a key factor in battles and players must pay attention to when residents are home or leave to run errands, lest they be left with an empty apartment when invaders come-a-knockin. Although, this isn’t so much a problem for random invaders as it is with quests.

Given Unholy Heights’ dark premise, it’s actually quite a cute and charming game. The game’s minimalistic visual style lends itself nicely to its simplistic gameplay. Everything takes place on one screen, reducing clutter and making sure everything easy to navigate. Visuals have a colourful and cartoony style while feeling very dynamic as weather changes—residents come and go and both the sun and moon (complete with faces) scroll across the sky, as if the background were on a pinwheel.

Unholy Heights also has a simple but quaint soundtrack, and while it only consists of five tracks, they feel like tracks Kazumi Totaka could have created for Animal Crossing. The two-day themes alternate between a smooth upbeat synth track, to a poppy, ska-inspired number while the night theme is calm and quiet with whistled notes. The latter honestly sounds the most like it belongs in Animal Crossing. The battle theme is probably the best: a fast-paced, chiptune J-Pop track that makes the simplistic battles feel fast and fun.

It seems odd that Unholy Heights would make the jump from Steam to the 3DS instead of mobile given how perfectly its gameplay lends itself to a fast, pick up-and-play style, most at home on mobile. However, for a $6.00 dollar digital offering, it’s the perfect game for any 3DS owner to keep on their system where they can easily drop in and out. Charming, stylish, and simple without being boring, Unholy Heights is a must own.

Unholy Heights is so good, it’ll make you feel sympathy for the devil.