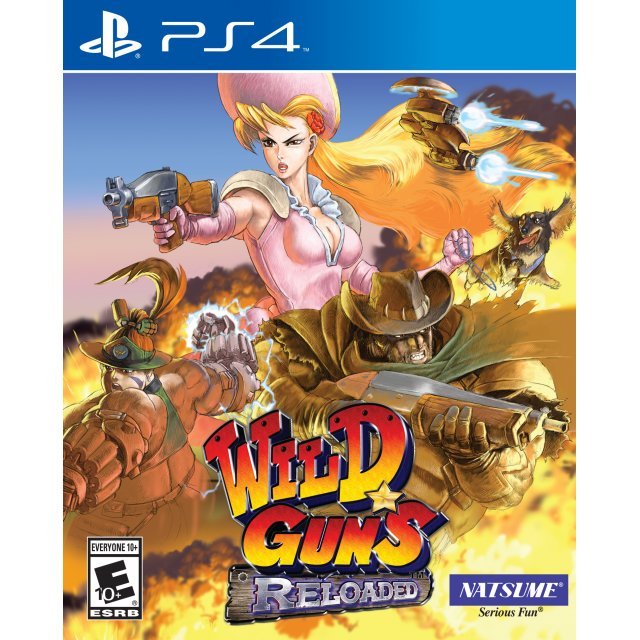 2016 has been a year in which anything can happen: from your favourite celebrities dying; to the first orange president of the United States being elected; to Wild Guns Reloaded, a 1080p remaster of a Super Nintendo game, being produced exclusively for the PS4.

This arcade shooting gallery comes to us all the way from the middle of the ’90s, when dreams were still alive. I can’t say I played the original Wild Guns on an actual SNES back in the day, but having played it on an emulator, it’s obvious how much care and work went into this remake, even if at first glance you might get the impression Wild Guns Reloaded is just an upscaled SNES game. The graphical differences are comparable to any arcade version of a 16-bit port from years past, as the sprites are bigger, crisper, and a bit more detailed.

Honestly, this feels like what should have been an arcade version of the original Wild Guns. Not only are the graphics better, but there are two more playable characters who each handle completely differently from the basic Clint Eastwood and Annie Oakley clones from the original. One is a dachshund (wiener dog) with a robot companion that shoots and carries his doggo buddy to safety when double jumping and the other is a plus-sized woman in a safari outfit who chucks grenades.

If it all sounds incredibly stupid and campy, that’s because it is, and I absolutely love it. Maybe it is a whole lot of nostalgia, but games of yesteryear weren’t afraid to cheese it up for laughs and fun factor. That is to say, they weren’t afraid to be video games. I can’t think of a single other game that lets me fight cowboys hiding inside of giant tumbleweeds and massive steampunk robots as a dog. Not a single one.

Wild Guns Reloaded isn’t without its pitfalls, though, as the arcade-like difficulty will be a turnoff to some, most of which is due to the awkward control scheme. While on paper the controls sound simple, as you just have movement, shooting, and a special button, in practice they aren’t so easy. Characters move at the same time as their aiming reticule, all controlled via the d-pad or left stick, which takes some getting used to. The two original characters plant their feet while shooting, while the new characters can move and shoot, with the safari glamazon being quite slow, but powerful thanks to her ability to throw a ton of grenades at the same time.

No matter which character I played as I found myself having trouble completing levels, even on easy mode. That said, practice makes perfect, and things got much easier once I eventually got used to the control scheme.

Those looking for a meaty game will want to look elsewhere, as the entire campaign can be completed in under an hour, assuming you don’t have to continue, which is quite short considering the $30 asking price for a physical copy of the game. The price for a digital copy has yet to be announced at the time of writing, though I’d wager it will be $20, which is about $5-10 too much if you ask me, especially if you don’t have any local friends to play with, as there isn’t any online play.

If you want a game that feels wholly original and recreates what it used to feel like to get a new SNES game, then Wild Guns Reloaded is the game for you. It’s stupid, it’s fun, and it makes me yearn for the days when video games weren’t so serious all the time.

The dreams of the '90s are still alive in this PS4 remaster of the SNES exclusive arcade-style shoot'em up known as Wild Guns.
REVIEW SCORE
7.5
File Under: