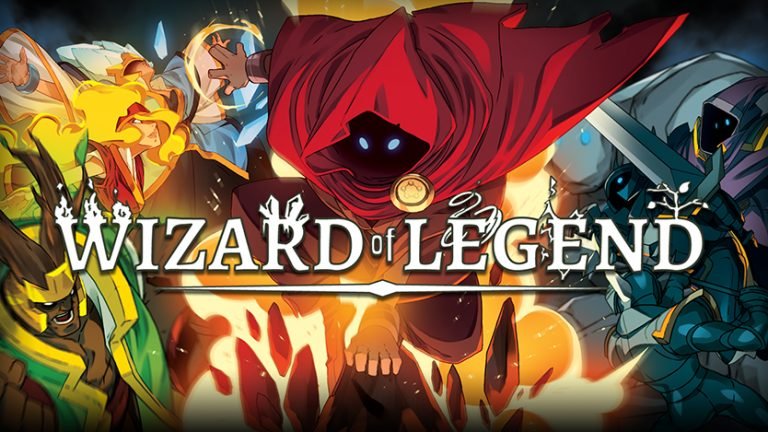 Wizard of Legend is a co-op roguelike dungeon crawler set in a contemporary fantasy world and is also the debut title from Contigent99.

I never saw the appeal of the roguelike genre, and going into Wizard of Legend I was nervous about the premise of permadeath and losing all my progress—thankfully, due to the fun and addictive gameplay loop, Wizard of Legend kept me coming back for more.

Wizard of Legend opens with what might be one of the more interesting tutorials I’ve played in a game. Instead of just plopping the player down into any old and dilapidated dungeon, Wizard of Legend instead opens with the player character awakening in a museum which acts as the intro to the game and has the player assume the role of a tourist as they make their way through a rather expansive and well-realized museum.

Contingent99 uses the museum setting to its fullest, in that the player is introduced to not only the gameplay mechanics, such as the nuances of combat, but also a sizable chunk of story elements, lore, and even the occasional funny snippet of writing that peppers the beginning of the game, giving Wizard of Legend a real sense of place and personality.

Essentially, magic is normalized in the world of Wizard of Legend thanks to the prevalence of something known as the Chaos Trials, in addition to the use of the arcana by the Council of Magic.  The Lanovian Council of Magic consists of three powerful wizards, each representing one of the core elements, including fire, ice and earth. The Council members also happen to be the creators of the Chaos Trials, a deadly and challenging test that exists in order to seek out the mightiest of magic-wielding wizards.

Things get very Disney as the player is transported to the main rest area of Wizard of Legend after the intro section is complete. Just like the museum of Lanova, the rest area is filled to the brim with detail. Animated and talkative furniture reminiscent of classics such as Beauty and the Beast, Snow White and perhaps most fitting of all, Fantasia, all help bring the room to life (quite literally) while further strengthening the charm of the game. The music in Wizard of Legend also does an excellent job of conveying the mood of each area in the game, like the rest area that features a really upbeat and cheery melody, which is a stark contrast to the heavier and more intense tunes found in places such as the boss room or PVP arenas.

Wizard of Legend isn’t overly difficult, but the game expects you to die, learn from your experience, and try again, which should be obvious with any challenging game. Going into the game after the tutorial, I felt as though I knew everything there was to know about the combat.

Attacks and a basic dash move are mapped to the four face buttons on the switch controller, with additional more powerful moves known as signature moves mappable to the ZL, ZR, or trigger buttons. Combos are easy to pull off, the action is fast and frenetic and in general, Wizard of Legend will make you feel like a badass. That is, until you realize health items are not easy to come by and when you die, that’s it, game over.

Thankfully, each randomly generated dungeon seems to usually spawn with at least one NPC vendor that carries HP potions amongst other useful items. Currency in the game is divided into two types: coins and chaos gems. The former can be easily obtained by slaying monsters, breaking objects, and just playing the game normally, however, coins—from what I can tell—can only be used to purchase items that can be used during a single life or instance of gameplay, dying or resetting the game will remove all coin purchased goods along with any remaining coins on the player.

Equippable items are where Wizard of Legend truly shines. The game features over 200 pieces of equippable gear, broken down into two main categories, starting with relics, which basically act as gear that augments your player character in a passive fashion. Some interesting and stand-out examples include a dark katana, which triples critical attack rates for all melee arcana spells, a friendship bracelet that increases damage and movement speed when playing co-op, and finally, a spirit that has a chance of freezing enemies in their tracks.

Arcana, on the other hand, give the player a bevy of interesting and often visually appealing attacks that can be equipped to any of the four face buttons of the switch Joycon or Pro controller pad. Arcana spells are really the main draw of Wizard of Legend, with dozens of arcana spells to collect, rearrange, level up, and tweak, and really give the game longevity and a reason to come back.

Signature moves are basically special attacks that have a cooldown of several seconds but deal massive damage and can be powered up by saving them until the end of a combo. One of my favourite arcana spells I found during my time with the game would have to be Cyclone Boomerang, a powerful signature move that creates blade-like wisps of air that when charged up can easily clear a room.

Cursed relics also spice up the regular gameplay and can only be found within a randomly generated dungeon, they are free to obtain but as the name implies, they’re cursed, giving players some form of a handicap on top of a desirable buff. One of the more interesting cursed relics I came upon during my time with the game would have to be a halo that granted an additional continue upon death but severely lowered the base HP of my character.

Dungeons themselves are broken down into three zones consisting of two levels each with a boss and a final boss room featuring one of the three Council members. Dungeons are randomly generated, meaning that in one playthrough players might encounter the fire area first, but in another, start with the ice dungeon. This can get frustrating at times, especially when you take the time to equip yourself with gear that caters to a specific level only to not have that level immediately available.

Easily the best aspect of Wizard of Legend is its two-player co-op mode, something that takes full advantage of the left and right Joycon controllers of the Nintendo Switch. Unfortunately, during my time reviewing the game, I was unable to use the Nintendo Switch Pro controller for the two player mode, which otherwise worked perfectly when playing solo. I’m sure this is something that will be addressed in a patch sometime in the future, however, it would be nice to have access to both Joycons and the pro controller during multiplayer, as some moves feel a bit awkward to pull-off using just a single detached Joycon.

Controller niggles aside, multiplayer transforms Wizard of Legend from a fun, pick up and play dungeon crawler to an intense and involved two-player romp through ever-increasing stakes, with the promise of actually beating all three members of the Council of Magic—something that just feels a bit more obtainable with the help of a friend. My only major gripe with the multiplayer mode in Wizard of Legend, at least for the Switch version of the game, is that, most notably during the earth-themed dungeon, I noticed some rather annoying dips in framerate whenever the action got a little too intense.

Wizard of Legend is a surprisingly deep game despite its simple premise, fans of dungeon crawlers, roguelikes or just anyone in the market for a fun couch co-op game should definitely check out Contigent99 debut title.
REVIEW SCORE
8.5
File Under: Humble Bundle, PC, PlayStation, rogue-like, Switch games, Xbox