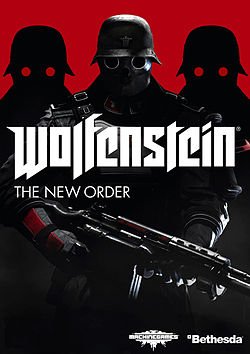 With the arrival of Wolfenstein: The New Order on store shelves, it’s now official: It’s finally okay to love killing Nazis again. The past five years have been dark times for this videogame practice, and seemingly not by coincidence, it’s also been five years since the last Wolfenstein game. What caused Nazi-killing to fall out of favor? One theory is that the Nazis wore out their welcome as most popular videogame villain when they tried to jump aboard the zombie bandwagon in Call of Duty: World at War’s “Nazi Zombies” mode. Obviously it backfired, and while the popularity of zombies (and their distant cousins, “not-zombies”) continued to grow ever stronger, videogame Nazis were gradually ushered into obscurity.

Sure, games like Sniper Elite, Velvet Assassin and The Saboteur have all flirted with killing Nazis since then, stealthily taking their sweet time to eliminate a couple or more of them at a time, but no game has pursued the notion with the same reckless abandon of a Wolfenstein title, making this latest entry a sight for sore eyes. And those old enough to remember the original Wolfenstein 3D know that Wolfenstein was the first-person shooter that that started it all; before Quake, before Doom, before Duke Nukem, there was Wolfenstein 3-D. So when a new Wolfenstein game shows up, it’s kind of a big deal. But with wholesale Nazi slaughter back on the menu in a new console generation, is Wolfenstein: The New Order truly “new”, or just more of the last-gen “same-old”?

In the game, players reprise the role of the franchise’s protagonist, Allied OSA (Office of Secret Actions) soldier B. J. Blazkowicz, at the height of the Second World War. In this alternate take on the Wolfenstein storyline, B. J.’s nemesis, former SS General and researcher of the dark sciences Wilhelm “Deathshead” Strasse now commands the Third Reich, and he is winning the war against the allies through new weaponry, machinery and cyborg soldiers powered by mysterious technologies. In a last ditch effort to turn the tide, Blazkowicz’s unit spearheads a direct air assault on Deathshead’s headquarters, but the attack ultimately fails and results in the capture of Blazkowicz and his team. Following a harrowing life-and-death decision and a daring escape, Blazkowicz is seriously wounded and left for dead. When he finally reawakens in a mental hospital 15 years later, everything has changed. It turns out that the Nazis won the war after dropping an atomic bomb on the United States, and now they have taken over the globe and all but stamped out any opposing force in America or Europe (the latter now known as “Germania”). Blazkowicz must now muster together what remains of the freedom forces in the region and begin the fight against Deathshead anew.

Naturally, the premise creates a wonderful excuse for players to romp about Europe and kill a lot of Nazis with extreme prejudice, and if that were all there was to The New Order, most fans could probably forgive it provided that the overall experience was up to the standard of past Wolfenstein games. But in a refreshing and unexpected twist, the developers at Machine Games and iD Software have striven far beyond that goalpost this time around, layering the intense action and violence we’ve come to expect from the franchise with a gripping story, engaging characters with colourful personalities, well-crafted cutscenes, and a masterfully eclectic soundtrack that is both simultaneously modern yet strikingly evocative of Wolfenstein: The New Order’s alternate 1960’s history. The pacing of the game ebbs and flows between action and story beats much like a film as well; one moment, it’s an Inglorious Basterds shootout with all the crassness, gore and dark humor you’d expect from Quentin Tarantino when he takes the kid gloves off; the next it’s a debrief back at resistance headquarters where players can explore, interact with and get to know the supporting cast. Then it’s a slick, Brad Bird Mission Impossible-style cutscene that begins in the war room as the resistance plans its next move, but by the time it ends the game has already dumped Blazko and the player smack dab in the middle of the mission the team was preparing for. It’s very efficient storytelling, and very Hollywood.

The icing on The New Order’s narrative cake however is the way in which Machine Games chose to use Blazko’s omnipresent narration both in cutscenes and gameplay to provide a deeper insight into his psyche, which in turn highlights the story’s not so subtle theme of humanity’s ability to cope and fight for survival even in the face of ultimate despair. While most of these narrated moments focus on Blazko’s efforts to simply hold his emotions together during moments of unspeakable horror, his longing for a peaceful, simpler life that never was, or the occasional need to “just feel”, one sequence is exceptionally poignant.

During a lengthy underwater swimming sequence at the game’s midpoint, Blazko occasionally breaks the watery silence at key moments by reminiscing about a childhood visit to the lake with his father, a memory that ultimately ends in a traumatic experience involving leeches. While the experience pales in comparison to the suffering and tragedy Blazko has experienced since the war, it resurfaces nonetheless because of its association with swimming, and the act of recalling it seems to calm Blazko as the player goes about completing the mission. As a result, a sequence that in another game would normally have been wordless (or worse, filled with lame one-liners) actually strengthens the narrative, re-emphasizing Blazko’s longing for the simple things that he and America once took for granted, like innocence, freedom, and youthful rebellion. It’s a great game moment where not even a single bullet is fired nor an enemy killed, but it’s mingled with such tangible feelings of hope, lament and despair that it gives the whole sequence a deeper meaning.

So really, the only other question to consider is whether The New Order, a decidedly single-player experience, can possibly be worth the same $60 US ($70 CAD after inflation) that most popular first-person shooters offering both a single-player and multiplayer component charge? And the answer to that question is absolutely YES. Wolfenstein, most notably on next-gen consoles, is a gorgeous shooter that takes as much advantage of the hardware that a new cross-gen release can be expected to, and while the details of the character models won’t give those of Infamous: Second Son or RYSE a run for their money, the excellent writing and acting behind each character infuses them with a life and personality that few games in 2014 can claim.

More importantly, this game stands as evidence to developers that doubling down on the strength of the story, characters and content of your game can still deliver just as satisfying an experience as a game that focuses primarily on multiplayer. This reviewer’s playthrough on the default difficulty took nearly 12 hours to finish, and players who wish to go back and experience the alternate timeline (based on the aforementioned “choice” Blazko must make in the early part of the game) can expect to potentially double that playtime, and extend it even further should they choose to complete every mini-game, hunt down every letter, read every news clipping and uncover every hidden enigma piece. If you’re a shooter fan that appreciates a deep, well-crafted and mature entertainment experience, Wolfenstein: The New Order will give you more than your money’s worth.

To read Khari’s full review, check out the the June issue of CGMagazine.