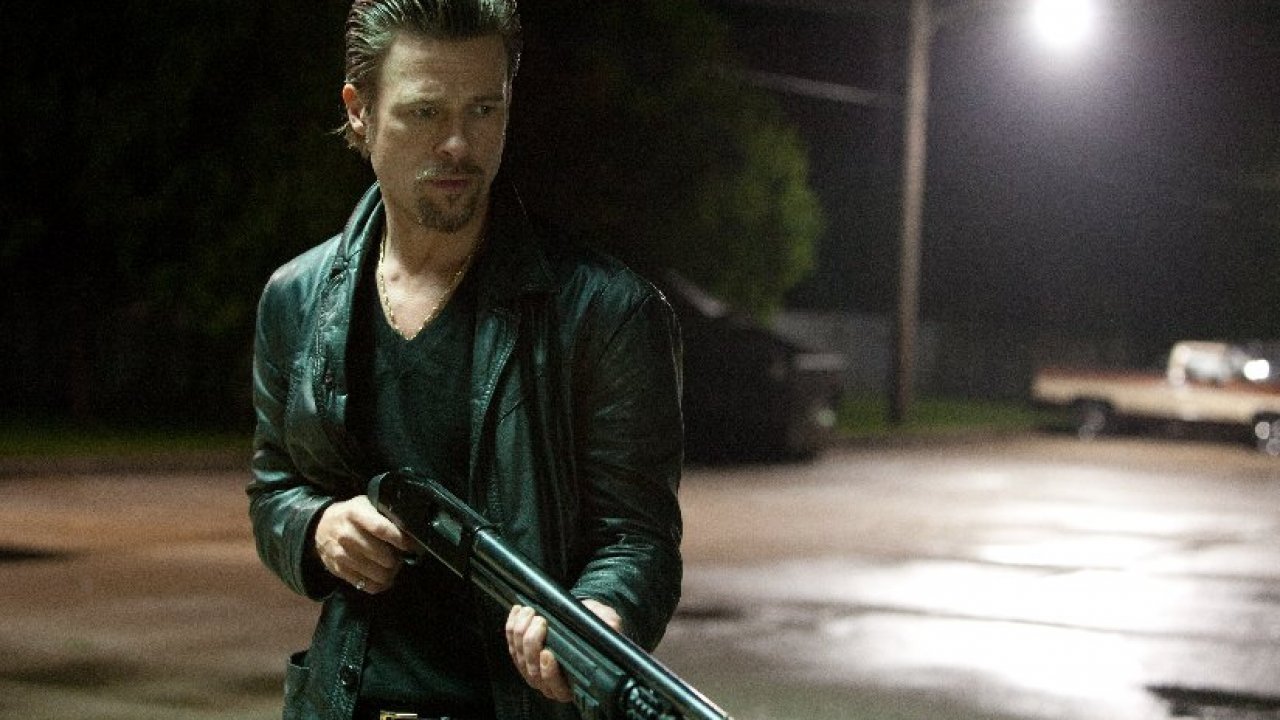 During awards season film releases tend to get rather serious.

The only hope for us genre loving folk comes in blood n’ guts gangster films, one of the few genre movies that are allowed to be treated seriously (we can thank The Godfather for that). This year’s entry in arty gangster fair is Killing Them Softly, a movie by Australian export Andrew Dominik who turned the life of Aussie mass murdering madman Mark Read into a sadistic dark comedy in Chopper (which also lead directly to Eric Bana being cast as the Hulk…but we can’t blame Dominik for that) and then made the underrated, yet undeniably pretentious Western The Assassination Of Jesse James By The Coward Robert Ford (the secret to realizing that one is pretentious lies in the ludicrously long title). Now the man who likes to stage violence with the artful precision of a gallery artist is back with a new movie starring Brad Pitt that strives to slather layers of meaning onto a pulpy tale. It’s a blood-soaked gangster yarn loosely and forcefully tied into the current international economic crisis for smarty pants bonus points. The movie is uneven, but certainly the work of a filmmaker with enough talent to deliver something resembling a hard-edged masterpiece one of these days. This one just isn’t it. 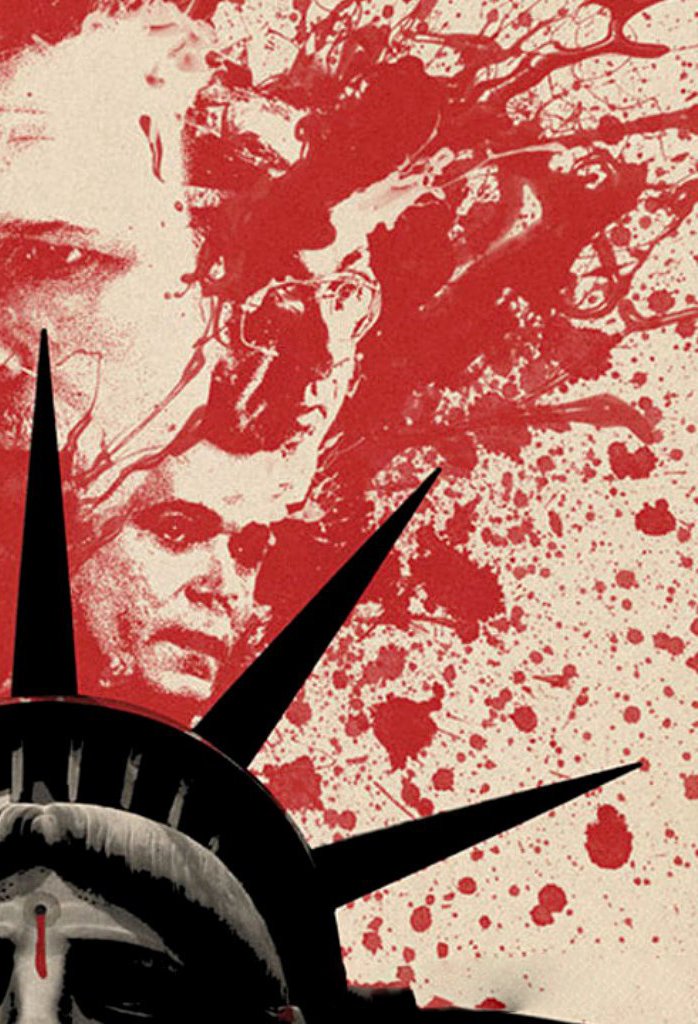 Brad Pitt stars as an impossibly pretty hitman (they really should have given him a scar or something to downplay the People magazine angle) who is brought in to a depressed crime community to set things straight. Those running the crime syndicate are broke and the old face-smashing ways have been replaced by uptight accountants with guns struggling to keep some sort of cash flow kicking. The depressed lowlife economy always gets together for card games to share the wealth/destroy some wallets and is run by Ray Liotta in pathetic pusher mode. Liotta’s has such fiscal trouble himself that he once robbed his own card game for extra cash and received the expected kick-to-the-head punishment. Two particularly pathetic hoods/drug addicts (Ben Mendelsohn and Scoot McNairy) decide to rob his game knowing Liotta will get the blame. That’s when Pitt is brought in to set things straight. He punishes Liotta, but knows he’s not really responsible. So Pitt digs around, finds out who did it, and convinces his mob contact/hilariously uptight accountant (Richard Jenkins who recently punished the pesky kids of Cabin In The Woods) to bring in James Gandalfini’s button man to get things done. Of course, things are so bad for the entire mob community that the former heavy weight killer Gandalfini is so depressed he can’t even leave the comfort of his hotel room/favorite hookers. So Pitt has to do all the dirty dealings himself, if only so he can be the only person in this whole mess to get paid.

So, as you can probably gather, this isn’t your usual Tony Montana-style “joys of being evil” gangster romp. Nope, this might be the saddest and most pathetic group of gangsters to ever strut their stuff across a big screen. It’s also a very realistic side of the world rarely scene on screen. While the likes of Liotta and Gandolfini might bring their gangster star baggage with them, that’s primarily a misdirection tactic by Dominik. He uses their images to make you expect heroics, only to show that even the stars of this crime world are pathetic failures. It gives Liotta and Gandolfini a chance to deliver their finest work in years, dropping all of their usual macho posturing to create truly damaged human beings that are deeper than any character they’ve played in a while. Ben Mendelsohn and Scoot McNairy are even better as the sad heroin addled deadbeats who kick off the whole bloody tragedy. They look, sound, and feel like people who just wandered out of a methadone clinic desperate for cash and a fix, and will dig into your sympathies despite being terrible people. On the more stylized side of the spectrum, Jenkins plays a hilarious figurehead for the new numbers-crunching mob-as-big-business, while Brad Pitt takes on a classic Man With No Name cold killer role, delivering a larger than life movie type that still fits into Dominik’s depressing reality. The filmmaker himself is a star in the movie, delivering a stylized and gorgeous movie aesthetic that heightens without ever undermining his carefully constructed sad reality. His use of violence is disgusting and shocking, stripping gangster movies of any sense of heroics.

“This might be the saddest and most pathetic group of gangsters to ever strut their stuff across a big screen.”

Had the movie played the story straight and let the connection between the depressed crime movie economy and the current global recession economy, Killing Them Softly could have been a nice n’ nasty slice of hardboiled crime fiction with an intellectual edge. Unfortunately, the director is a bit too enamored with his social commentary and hammers that connection home hard through constant radio and TV footage of the lovable George Dubya and Obama discussing the recession and empty promises of hope during the 2008 election. Dominik essentially rubs his audience’s face in the subtext like a puppy in need of poopy punishment and it gets obnoxious quickly with no relief. Thankfully, it’s not a problem so overwhelming as to destroy the film, but it’s certainly annoying enough to detract from the enjoyment. The filmmaker carefully paced and constructed a 90-minute slice of depressed mobster doom that would be a great dark crime drama without all of the overplayed recession connections. That’s probably just a result of Dominik being angry with America after coming to Hollywood on a gravy train after Chopper only to struggle with penny pinching execs and releasing an unfairly mangled Jesse James epic. There’s nothing wrong with a director making pulp personal, you just have to balance the artistic aspirations with the required button-pushing entertainment. Dominik tipped the scale a little too far in the wrong direction this time, but Killing Them Softly still proves he’s a filmmaker with skill, talent, and ambition that I’m certain he will fully realize one of these days.

Dominik tipped the scale a little too far in the wrong direction this time, but Killing Them Softly still proves heâ€™s a filmmaker with skill, talent, and ambition that Iâ€™m certain he will fully realize one of these days. 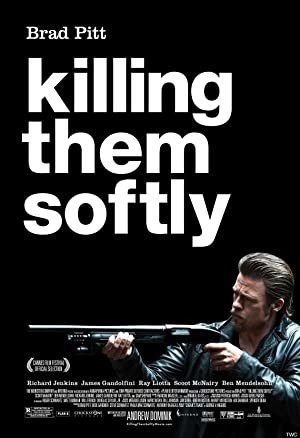