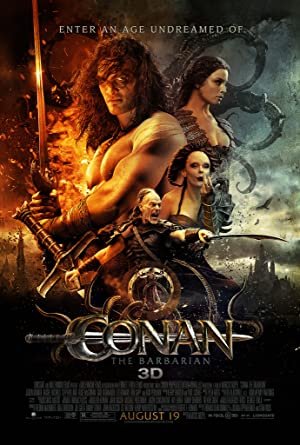 There’s no getting around it. If you want to spend your money on watching a shirtless bodybuilder swing a giant sword this week, you only have one choice. The remake of Conan The Barbarian features plenty of sword-induced decapitation, and all manner of body parts and entrails are splattered on the screen in ho-hum 3D.

What’s nice about the remake is that it does manage to recapture the gleefully R-rated carnage of the original Conan The Barbarian and 80s action flicks in general. If you’re tired of sanitized PG-13 action, Conan will slaughter its way into your heart and provide a few topless ladies for good measure. The downside is that beyond the action it’s a bit of a bore. The CGI effects are laughable at times, the “acting” can be pretty pathetic, and the story nothing more than a distraction necessary to stitch together action sequences. Movies like this don’t have to be art, but it would be nice if they weren’t boring whenever people aren’t being killed. This remake gets the job done, but it’s no danger of ever reaching the beloved status of the campy, but brutal original.

Discussing plot in a movie like this is kind of irrelevant, but let’s give it the ol’ college try. An opening prologue sees a preteen Conan slay some bad dudes and impress his father (Ron Pearlman). Then the warlord Khalar Zym slays his father and his entire village as part of his world domination plot. Conan grows up and decides to kill the shit out of Zym. He finds out that Zym needs the blood of a pretty lady for some reason and so he finds the girl and falls in love with her (cue an unbelievable cheesy skinemax sex scene), but she sadly gets kidnapped by the jerky Zym guy. I guess that means it’s time for a final epic battle. No points for guessing who wins, but since that have already been discussions of a sequel, you might be able to figure it out.

The1982 version of Conan The Barbarian starring Arnold Schwarzenegger was by no stretch of the imagination a masterpiece, but writer/director John Milius did try to create something that played with ideas of myth and fate outside of all of the general ass-kicking. It’s still a pretty silly spectacle with some hilarious cheese, but you at least get the impression watching it that the filmmakers know when it’s silly and are having fun with the material. Marcus Nispel’s version of the story doesn’t have a shred of self-awareness. Nispel previously helmed the remakes of The Texas Chainsaw Massacre and Friday The Thirteenth, which should give you a good idea of what to expect from his version of Conan. It’s very slick and professionally made on a slim budget, but is completely devoid of personality. The characters speak only to set up the next action scene. At one point Conan sums himself up by saying, “”I live, I love, I slay. I am content.” You can tell that’s about the sum total of thought that the team of 3 screenwriters put into the characters, and they actually think that line is profound rather than laughable. I’m not saying the world needs an art film version of Conan The Barbarian that deeply explores the soul of the warrior. That would be far worse than this remake. I’m just saying that it wouldn’t have been a bad thing if the filmmakers had put a little more thought into their story and characters than just “what can we have them say that would have them killing each other as quickly as possible?”

Now, that action-first attitude does admittedly lend itself to entertainment. Whenever the cardboard characters are bashing each other with pointy objects, the movie can be quite enjoyable.  Baywatch veteran Jason Momoa is no Arnold Schwarzenegger, but his 6 foot 5 frame is well suited to action movie ass kicking. Ron Pearlman seems to enjoy his big bearded costume in the prologue and casts a memorable presence over the film, while Rose McGowan has fun vamping it up in skin-bearing attire as a witch. The rest of the cast merely go through the motions with the idea-free director. Make no mistake, Conan The Barbarian is vapid entertainment; however, at least it delivers on the “entertainment” promise.  It’s also nice to see that it’s possible to make R-rated action movies again, even if they have to be remakes. I hope that this film is a success, not so that it can kick off a new Conan franchise (the world really doesn’t need that), but so that we can maybe start getting R-rated action movies with a little edge to them again. Pulp aimed at adults hasn’t been around for a while and it’s time for a return. Hopefully, subsequent R-rated action movies will be better than this forgettable version of Conan, but at least it’s a start.

Whatâ€™s nice about the remake is that it does manage to recapture the gleefully R-rated carnage of the original Conan The Barbarian and 80s action flicks in general.
REVIEW SCORE
5
File Under: