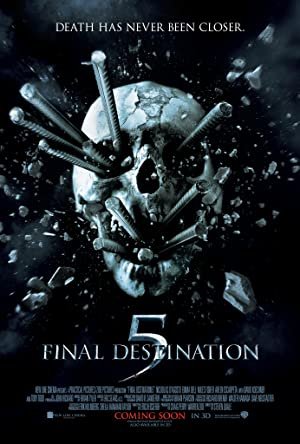 Final Destination 5 really comes down to what you expect to get out of it when you plunk down the cash for a ticket. Looking for psychologically complex characters and a moving story that pushes the boundaries of the genre? Look elsewhere. By the time you hit part five in any recycling franchise, wheel spinning inevitably sets in. If you’ve seen any of the previous four Final Destination movies, you’ll know exactly what to expect her.

There really aren’t many surprises in terms of the plot or central concept. But at the same time, the series isn’t really about that. It’s about the gloriously elaborate and ridiculous death sequences. They take up about half of the running time and there’s no denying that director Steven Quale and writer Eric Heisserer came up with some pretty creative ways of bumping off their pretty cast in wonderfully gimmicky 3D (the best kind). If you’re brain is melting in the summer heat, this is a pretty damn entertaining way to turn it off in an air conditioned theater for 90 minutes. You just have to like hilariously elaborate death scenes, and really, who doesn’t?

Like all Final Destination flicks the story revolves around a group of young folks who survive a freak accident when the main character sees them all gruesomely die in a vision, and is able to save their lives just in time. This messes with fate, and now they must all die through a series of odd coincidences and happenstances with Rube Goldberg levels of creativity. The whos and whats of the story aren’t that important. Does it really matter that the main character is struggling to decide that whether to move to Paris to become a chef or stay in a boring small town existence for the sake of his girlfriend? Of course not. They’re going to die within 90 minutes anyways and any sense of plot or character development is there simply to fill in the gaps between death scenes. Five movies into the series, the Final Destination formula is well established and ain’t going nowhere. The main character has a vision, saves his friends, and then they start dying. He figures out the fate thing (usually via a gravely voiced Tony Todd), they try to stay alive, but you can’t change fate. Credits.

The only thing that really matters in a movie like this are the death scenes and good lord do they ever deliver the goods. The film was directed by Steven Quale, James Cameron’s second unit director of choice who supervised action sequences in Titanic and Avatar when the big guy wasn’t around. Quale knows how to execute a suspense set piece and creates some dooseys here. The opening bridge collapse is a remarkable technical accomplishment. It’s obviously CGI heavy, but mixed with actors and practical effects in a way that actually tricks the eye and doesn’t look like a cartoon. His death scenes are incredibly complex and executed with enough misdirection and carefully crafted suspense to provide shocks every time. The backbreaking gymnastics set as well as the laser eye surgery and acupuncture gone wrong sequences instantly rank amongst the best kill scenes in the entire series and will have audiences cheering with sadistic delight. Having worked on Avatar, Quale also knows his way around James Cameron’s groundbreaking 3D technology and clearly has a blast splattering blood, body parts, and debris all over the camera. It’s all cheesy 3D gimmickry, but let’s face facts, 3D isn’t art nor is it an after-effect you can slap on a movie as a box office booster. It’s a fairground illusion and a perfect compliment for a goofy horror movie. 3D should be used sparingly on fun movies like this rather than on every single blockbuster. Fortunately audiences are starting to shy away from the plastic glasses due to overexposure, so hopefully the 3D craze will die down to more realistic levels soon.

Make no mistake, on any conventional level Final Destination 5 is not a good movie. It’s trashy, the characters are indistinguishable, the acting is embarrassingly bad (with the exception of David Koechner’s extended cameo as a sleazy boss), and the film adds nothing new to the franchise whatsoever. However, as a goofy B-move designed for silly entertainment, it’s pretty damn great. The death scenes are expertly handled, the 3D actually works, there’s a level, knowing humor that acknowledges how ridiculous everything is, and it actually has quite a clever ending that ties it in to the first movie. For a five-quel, that’s really all that you can ask for.

Final Destination 5 really comes down to what you expect to get out of it when you plunk down the cash for a ticket.
REVIEW SCORE
4
File Under: