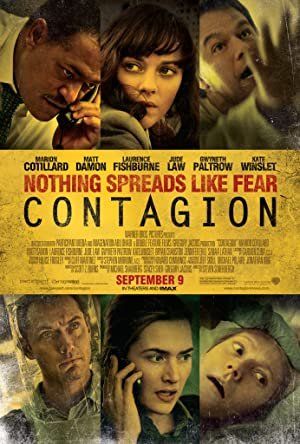 Let’s get this out of the way up front: Steven Soderbergh’s Contagion is essentially a Traffic with a disease. That’s not necessarily good or bad, it just means that the movie feels like the director revisiting his Oscar-winning multinational/multi-character epic structure with a different binding element. Is it as good as Traffic?

No. But when compared to other disease run amuck thrillers like Outbreak, Contagion stacks up pretty damn well. At its best, this is a tense and gripping thought experiment about what would happen if a viciously deadly disease were to suddenly strike the world. At its worst, it’s a mediocre mutli-character drama and still better than any disease scare movie should be.

It all starts when Gwenyth Paltrow returns to the US from a trip to Asia with a cough that (10-minutes into the movie spoiler alert!) quickly turns to death. It also takes out her son, but leaves her husband Matt Damon alive with only a daughter from another marriage left. At the same time, Laurence Fishburne plays a doctor and government official hired to monitor national operations involving the virus and find a cure. Understandably he’s a little stressed and working against seemingly insurmountable odds, particularly when his top official (Kate Winslet) at the scene of the infection contracts a pretty bad cough. Then there’s Jude Law as a renegade blogger (because apparently those exist) spreading fake news of cures, and Marion Cotillard playing a doctor sent overseas to find the origin of the infection who ends up kidnapped and held for ransom. Confused yet? Reading that tangled plot description you probably should be, but the remarkable thing about Soderbergh’s direction is that he balances all the competing plotlines so well, you won’t even notice that you have to keep that many parallel stories running in your head until you’re knee deep into the movie.

Soderbergh is one of the rare filmmakers in Hollywood capable of creating mainstream entertainment for the masses that’s still artistically interesting. He succeeds in that noble attempt as often as he fails, but when he’s on his game, few directors are better. Contagion is hardly his best movie, but it’s far from his worst. The script constantly avoids clichés and finds new ways of playing out scenes we’ve seen before (for example when the doctors casually tell Damon that his wife is dead, he initially doesn’t hear it and has to have it explained again. It’s nice and realistic twist on a very tired scene). The film is at it’s best for the first hour or so, with Soderbergh nimbly juggling dozens of characters while still constantly raising suspense and tension. It’s impossible to tear your eyes from the screen; the film is an amazing example of direction so effective that you’ll probably be too immersed in the drama to notice it. The chance to combine suspenseful thriller conventions with a multi-character tapestry movie is probably what drew Soderbergh to the project, and he does a great job with all the juggling.

The problem is that the movie kind of falls apart in the last act just when it really should be coming together.  Without giving too much away, Contagion has a happy ending, and honestly it shouldn’t. The film is at it’s best when it’s a cynical thriller about how all of the creature comforts and medical technology that we put our faith in to keep us safe could so easily fail and the humanity could face extinction from an infectious disease in an instant. It’s a terrifying concept, and had Soderbergh and co. rode it out to a dark, apocalyptic conclusion, the movie would have been quite a ride. Instead, everything wraps up nicely for the survivors in a way that will cause you to lose interest in the many faces crossing the screen by the time the credits roll. It’s still a pretty entertaining little thriller with some terrific performances from an all-star ensemble cast, but one that stumbles towards an inappropriately happy ending when it should race towards an inevitably bitter conclusion. Still, if you’re a fan of disease thrillers, then this is a must see. The pulse-pounding opening hour alone will have you looking scornfully and suspiciously at anyone who dares to cough in the theater.

Itâ€™s still a pretty entertaining little thriller with some terrific performances from an all-star ensemble cast, but one that stumbles towards an inappropriately happy ending when it should race towards an inevitably bitter conclusion. Still, if youâ€™re a fan of disease thrillers, then this is a must see.
REVIEW SCORE
6
File Under: Thriller