DC Rolls Over for a Funny Bone 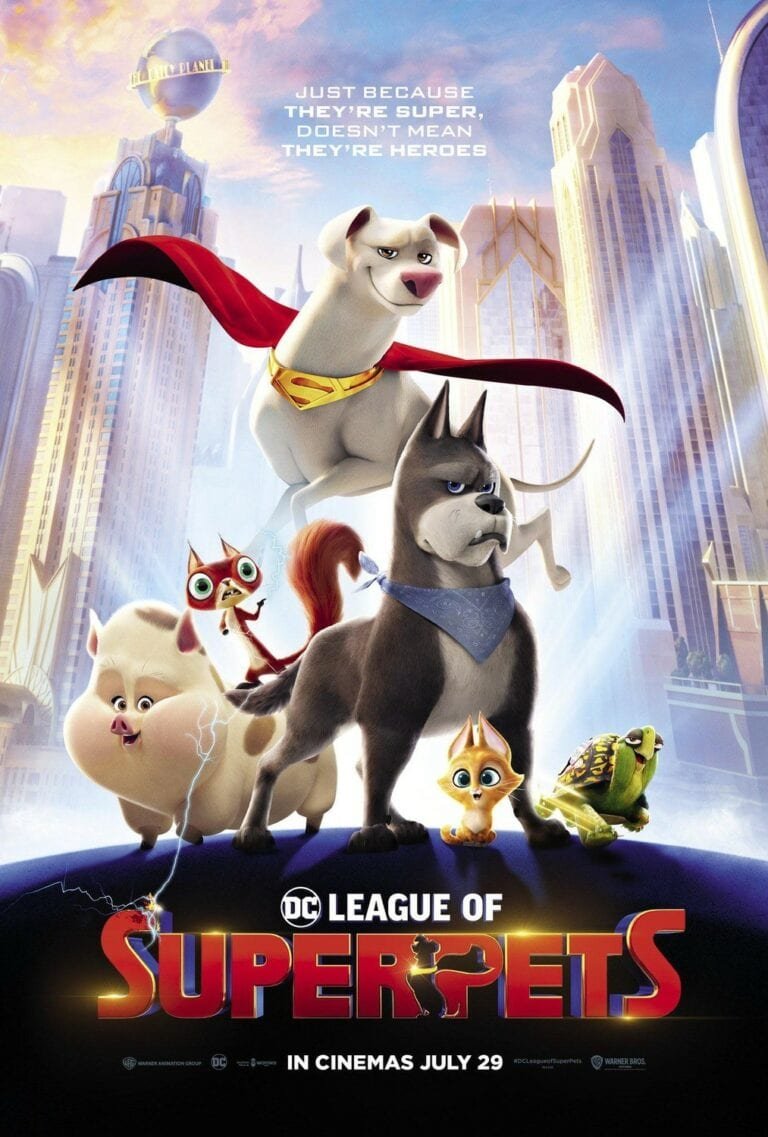 DC League of Super-Pets gives a long time Superman character his due. Krypto the Superdog has plenty of fun in his first solo film. Warner Bros and DC can’t quite escape cliches and a CGI -noise that has desensitized the youngest viewers. A cookie-cutter approach to superheroes beating supervillains bogs the film down with kryptonite-laced cheese. But DC League of Super-Pets’ smart approach to comedy gives parents plenty to laugh at. While director Jared Stern and the writing team take every jab at DC Comics lore with surprisingly good attention to detail.

Krypto has long been overdue for a solo film. The superpowered canine has long been Superman’s best friend since his first appearance in 1955 (Adventure Comics #210). Through Titans and various DC animated works, Krypo has been through as many adventures with other super pets. DC League of Super-Pets does wonders to honour Krpto’s unconditional love for Supes and Earth. While DC’s goodest, fuzzie-wuzziest boy is presented as more than an accessory. The film mostly spares viewers from a typical Superman adventure. In fact, it launches off the cookie-cutter comic issue to tell Krypto’s side. The added perspective gives Krypto more than enough flight time in a children’s movie.

Dwayne Johnson flexes every A-list muscle in his vocal chords to play a bold Krypto. The Rock never finds himself in a hard place when playing a hero. Krypto is injected with charisma kept alive by an unwavering joy. Of course, Johnson combines a dog’s self-aware thoughts with a strongman caricature. Viewers shouldn’t expect anything less from a seemingly invincible pet who saves the world.

I’ll spare you the details of spoilers. It doesn’t take Superman’s x-ray vision to see DC League of Super-Pets’ story beats. The film embraces a full nonsense children’s romp. Scenes don’t exclude a predictable plot, pee joke and Paw Patrol references. Children will absolutely get the best of both worlds from seeing a DC superhero film made especially for them. A familiar opening scene sees Krypto saving the world with his best buddy Superman (John Krasinski). But Stern keeps the plot developing on Krypto, who finds himself competing with Lois Lane (Olivia Wilde) for attention.

It’s a smart way for the DC League of Super-Pets to give Krypto conflict – as opposed to Clark Kent’s very human problems on top of vigilantism. After foiling another typical LexCorp plan, test guinea pig Lulu (Kate McKinnon) hatches her own plan to dominate the world. Stern leverages lots of pets to push a told story forward. But viewers won’t feel surprised by DC League of Super-Pets through its hour-and-a-half offering. Lulu takes on an evil Doctor Strange-esque role that fills in the villain slot. McKinnon might come off as unrecognizable for a villain. But this voice play works to give viewers a sassy and determined guinea pig.

The actual League part of DC’s Super-Pets takes this weight off Krypto’s shoulders. Ace (Kevin Hart) is a shelter animal before his Bat-Hound days. DC League of Super-Pets rightly crafts an origin story for each member. It feels less inspired by their respective heroes. Each pet also earns their hero status with balanced arcs. Potbellied pig PB (Vanessa Beyer) struggles to find confidence in her own shifting shapes. Chip (Diego Luna) is a red squirrel scared of using his electric powers for better or worse. Merton (Natasha Lyonne) is fast, comfortable with old age and craves lettuce. Krpyto finds a journey of his own to cobble up a team of misfits to save Supes and the Justice League. DC League of Super-Pets’ approach again comes as cookie-cutter as it gets.

“DC League of Super-Pets is very much a movie that isn’t afraid to downplay iconic heroes.”

Animators are at the top of their game in DC League of Super-Pets. The film neatly delivers a stylish universe of heroes. The city of Metropolis is impressively brought to life with plenty of moving parts. Special effects pack their own eye-popping details as superheroes and villains have at it. DC League of Super-Pets gets extra credit for using its animation to pull audiences into a colourful comic book panel.

It’s very disarming to see Johnson and Kevin Hart in the same room together without dropping a single F-bomb. But their chemistry infectiously wins over anyone who has seen Jumanji, Central Intelligence or Hobbs & Shaw. The acting duo and real-life friends are believable as super canine companions. No, I meant this in an endearing way that adds heart to the DC League of Super-Pets.

The comedy duo take jabs at each other with a winning formula. Casting was an even smarter choice for Hart’s grumpy demeanour that matches Johnson’s playful bravado. Both personalities come a long way from Henry Cavill and Ben Affleck’s fictional beef in Dawn of Justice.

But parents and children are treated with some sweet fan service cookies which make the plot bearable. DC already sets itself apart in a stylish Metropolis. While Easter eggs are intelligently baked into dialogue. DC League of Super-Pets is very much a movie that isn’t afraid to downplay iconic heroes. As pets are given their time to shine, fans will feel heartbroken seeing their favourites getting thrashed by evil guinea pigs.

“The film stays fun by translating the fan service directly into plot devices and comedy.”

Director/writer Stern still manages to turn each caricature of the Justice League around and joke about things audiences have long talked about. To give away Cyborg’s real weakness is spoiling DC League of Super-Pets’ funniest gag among others. The film never skips a beat for every pet giving into their baser instincts. It’s hard to not laugh at humans confused while pets give their own dramatic monologues. This adds the inevitable moments of “aww” throughout. Viewers will get their fair share of CGI cuteness – specifically with a psychotic kitten packing more heat than Deathstroke’s closet. The film stays fun by translating the fan service directly into plot devices and comedy.

Keanu Reeves steals every sound byte as a playful, grumpy version of Batman. It’s much-needed fan service to remind viewers where the DC League of Super-Pets exist. Viewers will sadly miss DC’s most recognizable heroes waiting for their pets to save them. There’s barely an effort to keep the stakes believable as adorable critters somehow accomplish what Lex Luthor (Marc Maron) couldn’t. John Krasinski, fresh off a Fantastic Marvel gig, doesn’t let up as Superman.

He’s surprisingly central to Super-Pets, until he’s sidelined with the rest of the heroes. The film keeps plummeting into a certain trap of including iconic characters, but not really giving them much to do. As the big villain plan typically fails and the heroes look to a brighter future, there isn’t much to remember. DC League of Super-Pets does go full meta in its second post-credit scene. Warner Bros is likely to save its CGI universe for other products to come.

Krpyto finds a heart adventure that matches his fun personality. This is combined with some cliched pieces of a children’s movie. But Stern and team managed to keep things afloat by culling DC comics’ rich material to throw experienced viewers off. While DC League of Super-Pets isn’t fully free of singing the same tune, it’s still nice to hear a version filled with barks.