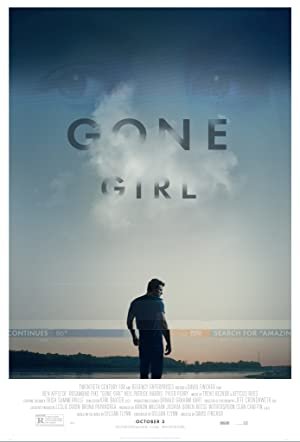 David Fincher emerged into the filmmaking out of the cesspool of music videos when MTV was at its peak. At the time, so many music video directors delivered empty, flashy fluff when they got into movies that he was a rare exception to rule who gave his promo compatriots a good name. Over the years, he’s become one of the most influential directors of his generation. The meticulous style, grit, filth, and lurid thrills he brought to movies like Se7en, The Game, and Zodiac redefined the aesthetic of the genre. While the decade defining vicious social satire he brought to Fight Club and The Social Network struck a deep cord with moviegoers. Now he’s returned with Gone Girl, an adaptation of Gillian Flynn’s ridiculously successful novel that comes to screens facing Twilight or Harry Potter level expectations from the book’s legion of adult fans who should probably know better. On it’s very pretty surface, the film is lurid airport reading trash. Thankfully, it’s lurid airport reading trash from a filmmaker and author who know exactly what they are doing and are not only game to subvert expectations, but also poke fun at their lovingly ludicrous thriller through a morbid streak of sneaky humor. Gone Girl is secretly a deeply dark comedy and a pretty great one.

Ben Affleck and Rosamund Pike (Shaun Of The Dead) star as a seemingly perfect couple who have just crossed the five year mark in their relationship. Through flashbacks (amusingly written in a pink frilly pen that only Fincher could make ominous) we see that they met cute and engaged in the type of endless flirty banter and constant spontaneous sex that only happens in fiction. However, when Fincher points his probing cameras on them at the start of the movie, they are far from happy. In fact shortly after things kick off, Affleck returns home to find his wife missing and mysterious signs of struggle. He reports her missing. Her wealthy parents fund a manhunt. It’s all very odd and cryptic, yet as the flashbacks and contemporary twists pile up it starts to become clear that Affleck just might be the prime suspect. To say anything more would be deeply unfair. As anyone would read the book will tell you and anyone who sees this movie will continue to preach, the story is a wild ride of unexpected twists and turns that simply shouldn’t be spoiled. It’s incredibly difficult to take a premise this common and find fresh surprises, so I wouldn’t dare to ruin the hows, whys, and what have yous

“The film is so well made and the actors play their roles so straight that most viewers likely won’t notice their watching a nasty, dark comedy.”

However, I will flat out acknowledge that must of the narrative is completely nuts and ridiculous. Thankfully, both Flynn (who adapted her own book into the screenplay) and Fincher are acutely aware of this fact and have pitched their movie to play on two levels. For much of the first half hour, things play out fairly straight with a few pitch black laughs to single what’s to come. When the biggest and wildest twist arrives, all bets are off. The film is so well made and the actors play their roles so straight that most viewers likely won’t notice they’re watching a nasty, dark comedy. That’s fine. This is a movie that Brian DePalma might have made in the 80s and Paul Verhoeven would have made in the 90s that operates as both an exquisitely crafted adult thriller and a tongue-in-cheek mockery of the form. Fincher’s sense of humor isn’t nearly as goofy or campy DePalma and Verhoeven though, so neither is his movie. Nope, Fincher’s always had a dry, cynical, harsh, satirical streak of humor in his work that fits Gone Girl perfectly. I’m certain Fincher intended to make a bleak comedy, just one so dryly pitched that people who don’t like such things will simply consider it a thriller. Even better, Flynn’s script lends it’s self not just to genre games, but also slick satire of media exploitation and gender roles, which Fincher gleefully dives into, and emerges with a movie far more rich and intelligent than it has any right to be, while still feeling just as lurid, exciting, and pulpy as it needs to be.

That’s a tough balancing act, but one that the expert filmmaker pulls off with ease. You have to be a master of a genre to play with it so freely and Fincher is exactly that. The film is beautifully shot in a way that guides and toys with the audience through all the suspenseful ups and downs, while still holding back with just enough cynical detachment for the satirical intent. The score from Trent Reznor and Atticus Ross (who previously teamed with Fincher on both The Social Network and The Girl With The Dragon Tattoo) is deeply atmospheric without ever drawing attention to itself. Just like the movie, the music sneaks under your skin without you even noticing. The film is also stunt cast to perfection with Affleck cheekily mocking his own relationship with media manipulation, Rosamund Pike delivering a star-making turn I can’t describe in good conscience, and both Tyler Perry and Neil Patrick Harris signaling the movie’s comedic intent with their mere presence (only one of those two gets the joke of their casting and it’s not a coincidence that he also got the joke in Starship Troopers).

What’s special about Gone Girl is how it operates on a few different levels without ever feeling stretched by ambition. At no time do Fincher or Flynn ever forget the brand of pulpy trash for adults they’re crafting. They deliver fully on every promise of the genre. They’ve just also sneakily made their film something that viewers can appreciate for its acidic wit as much as it’s masterful manipulation. If you get the joke, Gone Girl is one of the funniest films of the year in its own nasty little way. If you don’t, it’s easily the most enjoyable thriller of the year in its own nasty little way. Either way, it’s a movie designed to set low expectations simply to surpass them and let audiences stumble out of the theater knowing they got more than they signed up for. Now that’s good genre filmmaking. More of these please Mr. Fincher and less Girl With The Dragon Tattoos.

What’s special about Gone Girl is how it operates on a few different levels without ever feeling stretched by ambition.
REVIEW SCORE
9
File Under: Ben Affleck, Comedy, Film, Mystery, Thriller