The Hobbit: The Battle Of The Five Armies (2014) Review 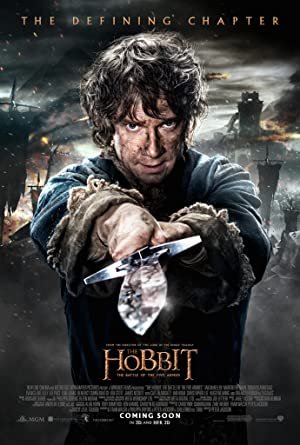 It all comes down to this. After nearly six hours of set up, The Hobbit has finally been allowed to climax. By now, it’s safe to say that viewers already know what to expect from the concluding chapter of Peter Jackson’s second Tolkien trilogy. The biggest flaw of the series to date has always been the ill-conceived decision to split a story into three movies that’s too slight to sustain that running time. There’s no fixing that for the third movie. That flaw is baked into the series and unavoidable. However, the film is pure payoff to everything that’s come before, both the good and the bad. The excitement lacking from the first movie is front and center in this third entry. It might be a little exhausting, but it is certainly an impressive accomplishment. The Battle Of The Five Armies is likely the strongest and most entertaining of all the Hobbit films. Even if you’ve been disappointed with the series to this point, it’s safe to say that this one will be more satisfying. This isn’t a Star Wars prequel situation where the series went so far and so spectacularly off the rails from the start that there was no saving it. Nope, The Hobbit trilogy has always been deeply flawed, yet successful in its aim of bringing Tolkien’s genre-defining fantasy universe to the screen in the most spectacular and expensive ways possible. They’ve all been worth watching even if they didn’t quite match the majesty of the Lord Of The Rings trilogy and this one is no exception. If Jackson’s second crack at Middle Earth has never been quite as successful as his first, that’s likely because you can only break ground in blockbuster filming once. In other words, once you’ve been there, it’s hard to go back again.

The Desolation Of Smaug ended on one big fire-breathing dragon cliffhanger, so this sucker picks up with the peddle to the metal. There’s no need to set things up. A dragon is flying towards a city with plans for incineration. Now, we get to sit back and watch the fire hit the fan. After a thrilling dragon-beating opening, the movie slows down once more for long speeches setting up a titular battle (with five armies, natch). Once the dwarves that Bilbo (Martin Freeman) has followed for two movies have finally found their legendary riches, greed immediately consumes them in a particularly Tolkien way. Specifically, Richard Armitage’s Thorin becomes possessed by greed and refuses to share beyond all reason. As word spreads throughout Middle Earth that Smaug has been slain and the great treasure sits unprotected, factions start to arrive to lay claim to the riches. Elves appear (led by the always bland Orlando Bloom and some equally bland others), as do humans (led by Luke Evans’ dragon slayers whose people now have nothing following Smaug’s attack), dwarves (led by Billy Connolly in a spectacular bit of stunt casting), and of course some goblins n’ orcs. There will be a battle. There is a battle. It lasts over an hour. Then things wrap up and the movies weaves towards a conclusion that ties directly into the opening of The Lord Of The Rings: The Fellowship Of The Ring. The circle is complete.

The film is undeniably thrilling and satisfying in a way that a concluding chapter to a trilogy ought to be. Ian McKellan and Richard Armitage are able to conclude the arcs they started two moves ago and do so to varying degrees of success (see their names to figure out who does the better job). Everyone else concludes their tiny arcs with little heft, while sadly Bilbo ends up shoved aside for much of the running time, despite Martin Freeman offering easily the finest performance of the trilogy. The plots that didn’t work also conclude and stop the movie dead in its tracks, especially Evangeline Lilly’s interspecies love story with a dwarf that ends on a line so cheesy that it should be booed. New additions to the cast don’t get much time to register in the rush to the finish line, but seeing Billy Connolly appear in full dwarf make-up calling goblins “buggers” is an undeniable joy. Everything comes together with a minimal number of story-padding digressions. The one major glaring addition that feels out of place at least involves both Cate Blanchett’s elf queen and Christopher Lee’s White Wizard, so it’s hard to complain too much. The film is even the shortest of the entire franchise at a merciful 2.5 hours, so it feels like a proper movie and less like endless Tolkien fan service. There are grand, sweeping battles to inspire “aws,” magic enhanced fights to inspire “ooos,” and some final confrontation fights to provide closure. Yep, there’s a great deal to enjoy, not the least of which is the work of a brilliant filmmaker given near limitless resources.

Peter Jackson is one hell of a director of special effects and spectacle and this movie is a chance for him to play with all of his favorite toys. As a work of pure spectacle and imagination, there’s no denying the incredible achievements on display. It’s a gorgeous movie to behold and the hour-long battle at the center sustains enough excitement to avoid tedium. However, there’s also no denying that we’ve been here before. When Jackson delivered his original Rings trilogy, he genuinely revolutionized fantasy filmmaking. Audiences had seen nothing like it and were enthralled. As impressive as the climatic sequences are, they feel expected now (perhaps even a little complacent). It’s nice that Jackson was able to return to Middle Earth and complete the Tolkien cycle with these Hobbit movies, but it’s far more exciting to know that he’s finally finished with this chapter of his career. Jackson used to be an exciting, unpredictable, risk-taking voice in genre filmmaking with titles like Bad Taste, Dead Alive, Heavenly Creatures, and The Frighteners. The Lord Of The Rings was a fantastic cap off to his growth as a filmmaker. King Kong was wheel-spinning. The Hobbit movies were regression. Now he needs to move on and I can’t wait to see where he goes next.

When The Lord Of The Rings trilogy ended, it was an emotional moment. The movies felt like a genuine cultural event and it was sad to see something so special conclude (so much so that Jackson couldn’t stop ending his own movie). When the credits roll on the final Hobbit movie, it feels more like a relief. That’s not to say that this trilogy was a mistake or a disaster. It just wasn’t a masterpiece. It started at its lowest point with a film that wasted an hour on a dinner and thankfully over the next two increasingly improved movies the trilogy has ended well. These movies aren’t masterpieces like their predecessors, but at least they play as a pleasant appendix for those who aren’t willing to leave Middle Earth after the first twelve hours. Had Jackson and Guillermo Del Toro been allowed to make The Hobbit as one or even two films as initially planned, we might have gotten a franchise extension to be proud of. That didn’t happen, but at least we didn’t get a disgrace. These movies were fun and effective, probably what was expected of the LOTR trilogy before it transcended all expectations. Perhaps the big mistake was the viewers expecting more. The Hobbit was always the cute preface to the full Lord Of The Rings meal. Eating an appetizer second is never good idea, but that doesn’t make it bad on its own. I’m certain the whole series will play better when consumed in the right order and without the burden of expectations that were always impossible to fulfill.