The Hobbit: The Desolation Of Smaug (2013) Review 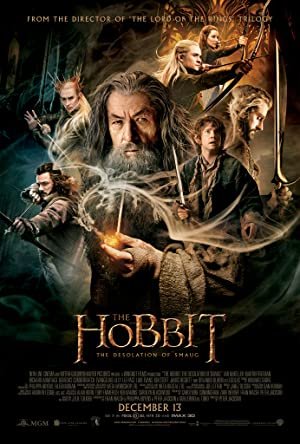 Last year the geek community swooned in anticipation of Peter Jackson’s return to Middle Earth. The very Hobbit-like director’s Lord Of The Rings trilogy had been the millennial Star Wars trilogy that both George Lucas’ prequels and The Matrix series promised and failed to deliver; a new fantasy epic that pushed the boundaries of what was technically possible in filmmaking without losing sight of the compelling characters and story that set up the sexy FX shots. Then An Unexpected Journey came out and all of the fansboy fears came true. The film was overlong, needlessly stretched out to facilitate an epic trilogy structure. It relied far too heavily on digital effects and the much-mooted new frame rate proved to be a headache-inducing, eye-poisoning disaster. It wasn’t a bad movie, just a deeply disappointing one. Now it’s a year later the second chapter The Desolation Of Smaug has finally arrived. Thankfully, the sequel rights many of the wrongs perpetrated last time even if the flick still fails to live up to the impossible standards set by the masterful Lord Of The Rings trilogy. This new series should have been a single movie and could have been great one. That didn’t happen and will never change. However, at least some stuff actually happens in the sequel and it proves to be an entertaining fantasy adventure romp without a proper climax. I suppose that’ll do for now.

The plot picks up instantly after the “really, it’s over?” finale of An Unexpected Journey. Martin Freeman’s Bilbo and a collection of Time Bandits-lite dwarves are continuing their endless quest to that mountain with a dragon and this time they actually get there (spoiler! Unless you’ve read the book of course). The film stays pretty close to the narrative Tolkien weaved many moons ago, with a few new additions that thankfully don’t just feel like padded running time in this chapter. A visit to the Woodland Elves realm introduces the first original character that Jackson and his screenwriters have introduced to the Middle Earth landscape. Her name is Tauriel, she’s a bad-ass warrior elf played by Lost’s Evangeline Lilly who Orlando Bloom’s returning Legolas (who was not in the book) pines for, but she actually falls for Adrian Turner’s pretty boy dwarf. The subplot reeks of Twilight-style soap opera, but thankfully works thanks to strong writing and stronger acting from Lilly. Elsewhere, Bard The Bowman (Luke Evans) is transformed from a plot device into a noble warrior feuding with Stephen Fry’s amusingly corrupt Lake-town dictator. Thankfully, both additions to the story actually add intrigue and action to a sagging middle act and then all roads lead to a dragon. Yes, Smaug finally appears, and between the gorgeous Guillermo Del Toro-inspired design and soothingly evil Benedict Cumberbatch voice performance, the big guy with fire breath doesn’t disappoint. It all ends in a cliffhanger, but at least this time you’ll leave the theater excited to see what happens next rather than disappointed that the film stops short of the punchline.

Watching The Desolation Of Smaug, it’s clear both that Jackson was sensitive to all the complaints launched at the last chapter and that he also had a plan all along. There’s no endless meal sequence this time around. The first 25-35 minutes drag a bit, but after that the director ensures there’s at least one massive action sequences every few minutes. The story is ramping up as well, so it’s not like its forced spectacle either. But at the same time every extended plot and new character builds to an additional action scene and that’s not a coincidence. Beyond injecting a little estrogen into the all-male tale, Evangeline Lilly’s Tauriel is actually an intriguingly conflicted character who gets a chance to cut loose in the best action scene of the series so far (she’s also dressed like Link in a few scenes, which should fuel some fanboy fantasies). That barrel-bobbing chase feels like a sequence from a Hobbit spin off videogame and Jackson’s digitally-liberated cameras swoop all over the action like a cinematic rollercoaster. The actors are also consistently wonderful. The dwarves may still feel like stock comedy players, but that’s as much a fault of Tolkien as the filmmakers. However, Martin Freeman continues to work his light comedy magic as the burgeoning hero Bilbo, Ian McKellen gladly returns to his iconic portrayal of Gandalf, and even Orlando Bloom’s limited skills are suited perfectly to the emotionless Legolas. Then of course there’s the dragon.

The last 40 minutes of the film are dedicated almost exclusively to Bilbo’s confrontation with Smaug and it doesn’t disappoint. The Weta wizards crafted a stunning CGI representation of the character. He has mass and scale beyond most digital creations and the unique design of the creature feels like a leftover contribution from original Hobbit director Guillermo Del Toro in the best possible sense. Cumberbatch’s slithery vocals give the character the refined sense of evil he needs and the whole sequence is such a magical mix of characterization, effects, and action that the entire Hobbit series finally hits his stride once the character hits the screen. The biggest problem with An Unexpected Journey was that it was all labored set up and now that the films are starting to pay off in chapter two, those problems are starting to vanish. Now, that doesn’t mean it’s a perfect film or an equal to the LOTR trilogy.

The flick is still too long and suffers from the typical second-part-of-a-trilogy issue of existing without a proper beginning or ending. However, the goods news is that the flick is entertaining and even magical this time and is well worth the price of admission. Seeing the series finally hit its stride, it’s more clear than ever that it should have been a single movie. The last flick would have been a perfectly acceptable first act and this movie could have easily been sheared at least in half as well. Had Jackson been able to make a single Hobbit flick, it could have been an equal to The Lord Of The Rings. Sadly, we’re always going to be stuck with this bloated trilogy, but at least it’s finally starting to come together into something entertaining, if not instantly iconic. The Desolation Of Smaug is a thrilling fantasy epic worthy of the Tolkien brand and with a massive battle and dragon city-smoldering yet to come, it’s safe to say part three will be just as good if not better. The worst of this series is over people. It’s all fantasy fun from here on out and actually worth sacrificing three hours of your Christmas vacation to experience.

The Desolation Of Smaug is a thrilling fantasy epic worthy of the Tolkien brand and with a massive battle and dragon city-smoldering yet to come, it’s safe to say part three will be just as good if not better.
REVIEW SCORE
8
File Under: Fantasy, Guillermo del Toro, Lord of the Rings, Luke Evans, Marvel, The Lord of the Rings