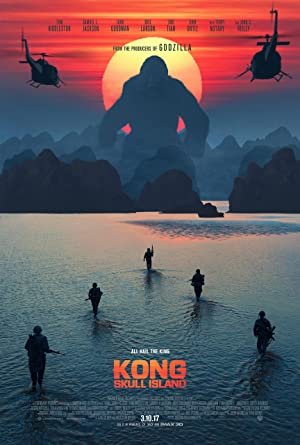 Good news for people who love ridiculous giant monster madness, the latest cinematic outing for King Kong is a non-stop monster-mash with barely any of the pesky characterization and attempts at visual poetry that slowed down Peter Jackson’s 3-hour monkey epic. Oh sure, the flick is loaded with imagery and ideas borrowed from Apocalypse Now (and Heart Of Darkness) and has some Vietnam allegories battering around beneath all the monkey mayhem. However, any and all subtext is pretty much just window dressing for a relentless roller coaster designed to ensure that audiences are always so overstimulated that they never have a chance to notice that there’s little nourishment to this blockbuster candy. That’s fine. After all, this thing is so goddamn entertaining that you’ll be too busy giggling between mouthfuls of popcorn to consider how dumb it all is until long after you leave the theater.

The film takes place in the 1970s (the era that produced the weakest Kong remake, but let’s not dwell on that). John Goodman plays a conspiracy-obsessed scientist who is convinced that monsters exist beneath the earth’s crust and somehow talks the government into bankrolling an expedition to a mysterious island that was just discovered. To lead the trip to primate insanity, Goodman hires Tom Hiddleston’s general adventure-man, Brie Larson’s adventure-loving photographer, and Sam Jackson’s army leader who is still smarting over being forced to leave Vietnam. As always, getting there is tricky but this time arriving is worse. Kong quickly makes mincemeat of all the ‘Nam helicopters, leaving everyone stranded on the distant island and Jackson’s machine-gun clutching madman determined for revenge. From there, expect even more endless action to be splattered across the screen until you are just as exhausted as the characters.

Working with a special effects budget for the first time, director Jordan Vogt-Roberts clearly has an absolute blast staging all of the giant monster shenanigans. The set pieces are massive and relentless, ultimately playing like a hyperactive child smashing action figures together and giggling at the results (in the best possible way). There’s a little dismemberment, but never beyond the cozy confines of PG-13 limitations. There’s not really any character to Kong this time out, no sense of the childish tragedy or his bizarre love affair with a human. He’s just a protector for humanity against giant monsters, which makes this one of the least meaningful Kong movies, as well as an appropriate set up for the planned shared giant monster universe that Warner Bros. will deliver shortly (and stay tuned after the credits for a little tease of that).

Unfortunately, most of the human characters are just as thinned out as Kong. Hiddleston and Larson sadly have little to do beyond action figure posturing and acting super hard against green screens. All but two of the other characters are essentially disposable monster targets. Sam Jackson distinguishes himself as a formidable Kong foe, screaming at the great beast as if he could beat him in a fist-fight, and delivering one of his most iconic lines from Jurassic Park with appropriate relish (an amusing in-joke and also an unfortunate reminder of how that ground-breaking monster movie blockbuster simply can’t be topped). Even better is John C. Reilly as both the comic relief and the heart of the movie. He’s a dazed pilot who has been stuck on the island since the Second World War, and plays up the culture clash and mad man shtick with glee. His presence is as joyfully entertaining as any of the monster madness (just wait till you see him swing a samurai sword at some of the beasties) as well as a reminder that the movie could have used a little more humanity.

In the end, Kong: Skull Island is a big and pretty entertainment machine with only the illusion of a beating heart beneath its glossy surface. It’s thrilling in the moment, but surprisingly forgettable afterwards. The movie both corrects the mistakes of Peter Jackson’s laboured King Kong remake as well as proving all the things that troubled blockbuster actually got right. However, the flick does deliver everything that made Jurassic World a massive worldwide hit and does it all even better. So, it’s likely that the complaints will be limited only to those who romanticize King Kong. Everyone else will just buckle up and enjoy the ride. Fair enough. There’s no denying the Kong-sized fun. Bring on Godzilla. It’s time these two icons duked it out on the big screen without any rubber suits slowing them down. Now there’s a blockbuster that could benefit from Kong: Skull Island’s complete and total lack of pretension or artistic ambition.

Kong is back in a movie as fun as it is dumb. That’s a good thing.
REVIEW SCORE
8
File Under: Warner Brothers