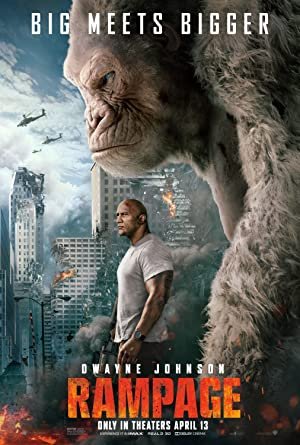 A Rock movie is far from a sure thing. As a man who has his own section for his filmography on Wikipedia, there are countless ups and downs most of which are billed as action flicks. I grew up watching him sway and show off his swagger in the wrestling ring, and those talents have translated well to film. Yet, Dwayne Johnson is still a long ways from being able to carry a film on his shoulders, even with the help of a giant CG gorilla. Rampage is stupid fun, but only when it’s not tripping over itself in the process.

We begin Rampage with a bit of exposition on “CRISPR,” a genetic substance that makes animals really big. Or something. No seriously, just in case we didn’t understand that this magic juice creates giant killing machines, one character is right there to explain it to us for nearly a full minute. An evil company, in an attempt to manipulate the natural course of humanity, mixes shark and beetle genes (and several other bits) into a cocktail that creates mutants. It sounds like a plot for a good Saturday morning cartoon: you know, something like when the hero has to do battle with their entire rogue’s gallery and somehow come out on top? That sort of wacky premise is good on paper, but Rampage takes itself way too seriously, almost like it’s needlessly revving up for its own cinematic universe.

Did I mention the extended exposition? The phrase “show, don’t tell” would go a long way in Rampage. I really wanted to see a Rock and gorilla buddy road trip movie, but they’re actually separated most of the film in favour of Naomie Harris‘ character, which merely serves as a MacGuffin for the climax, almost dissipating off-screen when she’s not needed. Then we have Malin Akerman as the head of the shadowy organization, who can’t carry the role, and the always affable but intermittently one-note Jeffrey Dean Morgan as the OGA (Other Government Organization) anti-hero, and two Watchmen I didn’t really care to watch this time. The cast have next to no chemistry with anyone, and most of the raw emotion plays out during the destruction scenes and with the animals themselves. We even get a “disgraced hero rolls her eyes and looks away as another person explains to us why she’s [erroneously] bad,” followed by a “how could you lie to me?” scene. The tone is all over the place and the editing is partially to blame.

Enter Dwayne “The Rock” Johnson to save the film and clean this mess up…kind of. The gist is that his character, the primatologist, Davis Okoye, is partial to one of the creatures that comes in contact with the genetic junk (the gorilla George), and has developed a very deep bond with him over the years. The juice also gets loose and enhances a wolf and alligator, which actually ends up becoming more of a dinosaur-like creature that more resembles the video game incarnation. The creatures, including George, do look impressive on-screen. Occasional shoddy CG work aside, they actually have some personality to them despite the fact that they don’t actually speak, and they get more than their fair share of terrifying sequences to assert their dominance. They’re formidable, lay waste to just about everything, and that’s where most of the fun is had.

Rampage is a mixture of following a paint by numbers destruction, world-building, and zinger writing, to the point of becoming comically formulaic. Several chuckles come and go but there’s a distinct lack of true belly laughs, and only in the movie’s final moments do we get an open-air, actual honest to goodness rampaging battle between the creatures. There’s a small amount of payoff to be had for sure, and The Rock sells it, but not before we get constant cuts between the supporting cast’s mostly lifeless characters.

If you want to watch The Rock kick a door in and make it look real, this is your flick. The moments of dullness are just that — dull — and don’t go into severe groan territory, as these paint-drying moments are okay enough to sit through until the actual magic happens. If you’re in the mood for a creature feature that actually manages to feel different and deliver a cavalcade of fully-fledged action scenes, you’d be better off looking for Kong: Skull Island or its ilk.

There's a great pointed idea embedded in Rampage, but it spends far too much time attempting to world build.
REVIEW SCORE
5
File Under: Dwayne Johnson