I knew I was in for an emotional roller coaster the second I saw the trailer for The Unforgivable, but nothing prepared me for the ride I just went on. The second you see Sandra Bullock with a bad hair cut, you know you’re going to be seeing her come Oscar season, and this proves so very true with this film.

Bullock takes the lead in The Unforgivable as Ruth Slater, a convict who has spent 20 years in prison for killing a cop. Of course, nothing is quite that simple, but we follow her on her journey back into society and all the trials and tribulations that follow suit. We follow her through work, friendships and parole, but most importantly, Ruth left behind her five-year-old sister, Katie, when she went away.

Though that section of the story is particularly triggering, especially being someone with young children in my life, I was surprised to see how heartbreaking the film was in its entirety. The trending lesson in the story is that Ruth lost her rights with the choices she made. She lost her rights to work, to friends, to love, and to family. However, there are always so many sides to a story, and each character in the film managed to find a new side to Ruth’s story.

Let me just say, the cast is stacked. The roles are small, but vital in the narrative. Viola Davis as a passionate mother, Jon Bernthal as the good-guy co-worker, and Vincent D’Onofrio as the lawyer with a bleeding heart. This is one of few roles I’ve seen D’Onofrio as the good guy. It was a nice change from Men in Black, Daredevil, or The Cell. The role he played was important in giving Ruth a fighting chance, and hope. He felt warm, forgiving, and his willingness to help Bullock’s character felt genuine, even up against his wife, played by Davis.

Davis’ role uncovered huge holes we were missing in the story. She is the protective mother, the one who KNOWS Ruth doesn’t deserve rights, until she does. We are faced with two strong women at odds with each other protecting the ones they love. In an instant, you see the tension break between them as the story changes to something more, something deeper, something darker.

“The Unforgivable is a devastating film in the most meaningful way.”

Bernthal was another character I found myself rooting for, and another case of “everybody’s got a story.” He came into Ruth’s life, made her feel real again, but quickly taught her that she needed to continue protecting herself, even on the outside. I wanted to hug him, then hurt him and then somehow hug him again.

Bullock though, she ruined me, as she is known to do. Thinking back on her scenes in The Unforgivable, I’m brought to tears. The pain behind her eyes, the rough edges she displays in her voice and the way she carries herself, she has completely transformed into her character. The desperation she is able to convey through a look or simply pacing around the room speaks wonders for the actor that she is.

The script was written by Peter Craig, Hillary Seitz and Courtenay Miles, based on the TV mini-series Unforgiven written by Sally Wainwright. I’m very curious about how this story would play out as a longer series, and wonder if it would have the same effect with the story broken into pieces. Directed by Nora Fingscheidt, and brought to life by the incredible actors that were involved, I can’t see this film done any other way. It was perfect. Oscar nominations are inevitably on the way for The Unforgivable.

The Unforgivable is a devastating film in the most meaningful way. It explores loss, fear, love, protection and new beginnings in really raw ways. Flawlessly acted, and beautifully written and directed, this is a film I don’t think I can watch again, and that is one of the biggest compliments I can give. There are no words for The Unforgivable, only feelings.

The Unforgivable is sure to be seen this award season. The performances, script and direction are perfection, and it will leave you shaken and smiling at the same time. 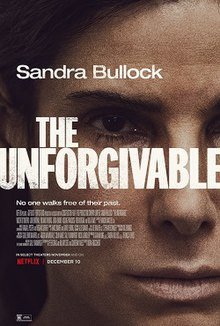