Tick, tick…Boom! is a rollercoaster ride. There is no better introduction for this review. The film starts off at full speed and doesn’t slow down for a second, pulling you to manic heights and depressive lows along the way.

The film follows the life of Jonathan Larson, played by Andrew Garfield. He is a composer and playwright, known for tick, tick…Boom! and Rent. Tick, tick…Boom!  was based on the musical of the same name, written by Larson, with the screenplay adapted by Steven Levenson, and directed by the one and only Lin-Manuel Miranda.

Larson’s story is a tragic one. We follow him through his writing journey, navigating life along the way. And ultimately, see how tick, tick…Boom! and Rent came to be. Larson died at the age of 35, the night before Rent premiered on stage, never getting to see his most famous piece of work brought to life.

Something about Andrew Garfield captivated me from the minute he appeared on screen. He isn’t just my friendly neighbourhood Spider-Man anymore. After seeing him in The Eyes of Tammy Faye, and now tick, tick…Boom!—there is no doubt in my mind that he is a true chameleon and can handle any role thrown at him.

“Tick, tick…Boom! is a story about the ultimate birth of three different musicals, told through the chaos of creating one…”

Usually during a film, I get distracted, playing on my phone etc.…I couldn’t stop watching tick, tick…Boom!  Of course, the songs are filled with life and emotion, and they definitely evoke a vibe that can’t be ignored, but they would be nothing without the actors behind them. Garfield managed every emotion on the spectrum in this film and brought viewers along for the ride in the best way possible.

Tick, tick…Boom! is a story about the ultimate birth of three different musicals, told through the chaos of creating one, Superbia, a musical of Larson’s that never came to fruition. If that sounds complicated, it’s because it is. We are tossed through scenes of tick, tick…Boom! performances, Superbia workshops and a story that ultimately inspired Rent. Levenson and Miranda took the play and turned it into a film that should be incredibly confusing, but somehow works seamlessly, transitioning from scene to scene and song to song.

“…a touching tribute to Jonathan Larson.”

Legendary guest appearances aside, the supporting cast manage to really highlight the struggles of the 90s HIV epidemic, and life as a friend of a struggling playwright.  Garfield forces us to see every conflict through Larson’s eyes, but when we begin to see through the cracks, and view him and the world around them through the eyes of Susan (Alexandra Shipp) or Michael (Robin de Jesus), it creates a new conflict within us. You begin wanting everyone in the story to win but have no idea how to get there.

Robin de Jesus has a number called Real Life. It’s under two minutes in length, but the story going on at the time, paired with the pain in his voice, sent chills down my spine. Come to Your Senses is a duet performed by Shipp and Vanessa Hudgens who plays Karessa, a singer in the Superbia workshop. The song was torture for Larson to write, and his relationship with Susan was ultimately the spark he needed to finish it. The switch between Shipp and Hudgens singing, the war between his real life and his art, finally coming to form in a song that has been haunting him, was beautiful to watch and the women nailed it.

Can we also mention that Judith Light plays Larson’s agent, Rosa Stevens, and Bradley Whitford plays Steven Sondheim??? The names that showed up in supporting roles or cameos had me watching every face I saw, looking for references to other musicals or films I might recognize. The cast is stacked, but who doesn’t want to work on something directed by Lin-Manuel Miranda these days?

There are a few videos going around about Garfield and Miranda and how this film came to be, with Garfield not being a singer prior to this role. It turns out, he has a voice that Musical Theatre will adore (though we could do without him rapping), and I sincerely hope to see more of him in roles like this. Lin-Manuel Miranda has yet another success on his hands with tick, tick…Boom! We are sure to hear about it with awards season coming, and I’m off to watch it again.

Starting with a bang, or maybe a Boom! Tick, tick...Boom! was captivating from beginning to end with stellar performances from all involved. 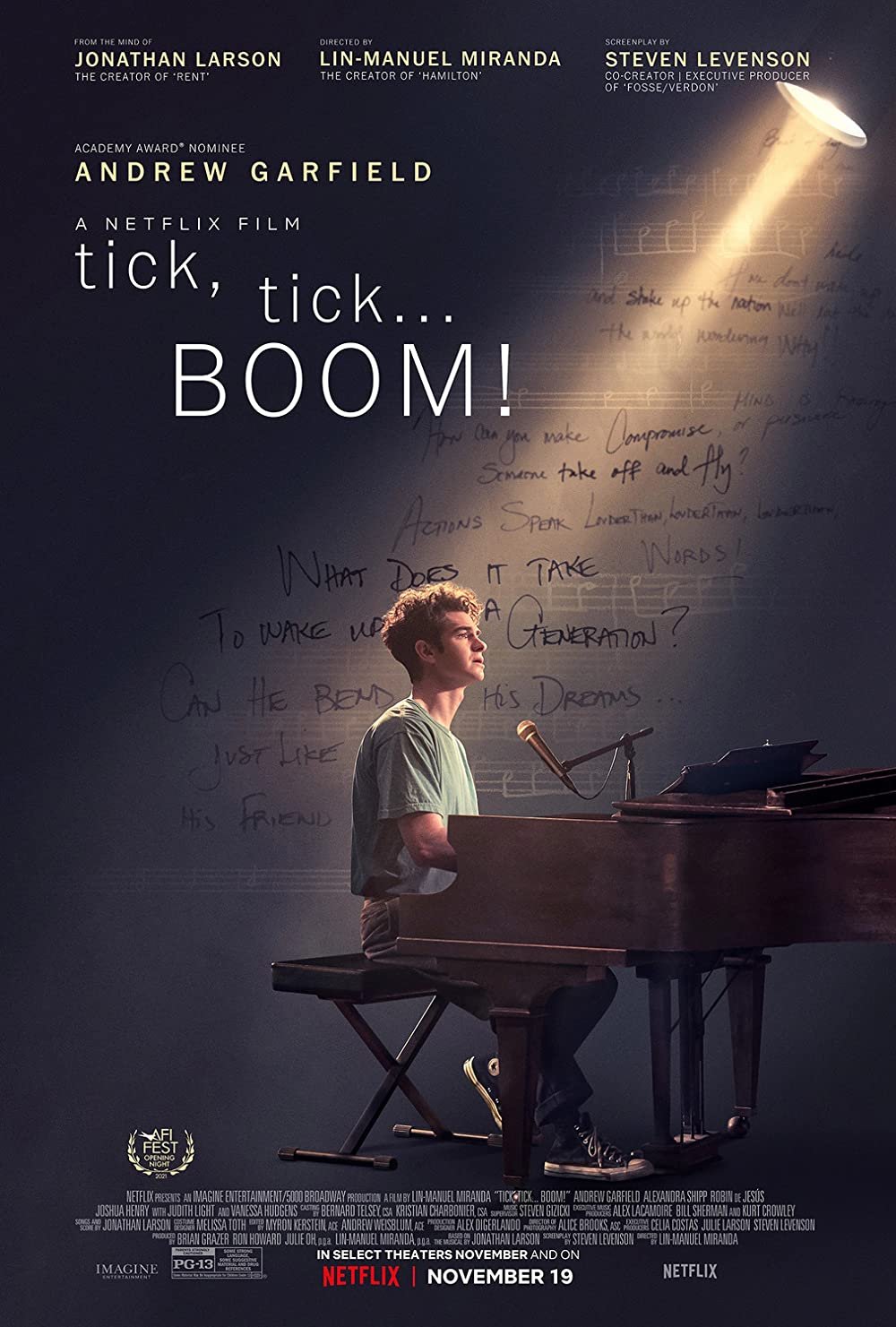