A Bombastic B-Movie that Never Sticks the Landing
SCORE: 6/10 Looking at the TIFF lineup, it is easy to think that genre cinema took a back seat for this year’s mostly virtual festival. But, even with a reduced roster, and a limited number of films, there are a few that are worth mentioning, one being the new Roseanne Liang film Shadow In The Cloud. Set on a  B-17 Flying Fortress, this unique little film throws gremlins onto a plane as all hell is breaking loose in the skies. While the concept and style ooze fun, bad dialog and an awkward script take away from what could have been an exciting WWII monster romp at 9000 feet.

Set in New Zealand during WWII, Shadow in the Cloud centres around No-Nonsense pilot Maude Garrett (Chloë Grace Moretz) as she plans to hitch a last minute ride aboard a B-17 Flying Fortress getting ready to leave. As she presents her orders and tells everyone to protect her mysterious package, she is forced down to a lower turret for the duration of the flight. As she quickly discovers, all is not right aboard the B17, and squadron of Zero’s takes aim at the plane, things quickly go from bad to worse.

The crew of B-17 beyond the sympathetic Quaid (Taylor John Smith)  can best be described as clichés of what airmen of the time would act like. When they are not spewing out sexist comments or talking about the skies are for men, they are left with little to do beyond complain about things falling apart around them. This is disappointing, because with a better script, and some time taken to this crew, the sacrifices they make in the latter half of the film would have had far more meaning.

With the rest of the crew acting as set dressing for the majority of the 80-minute runtime, Shadow in the Cloud gives Chloë Grace Moretz’s space to shine, and shine she does. While the script can be awkward at some times, and downright gross at others, one signing light in the darkness is how Moretz takes to her character, giving her a lived-in aura about her. This is a woman who has struggled for what she has, and is willing to risk everything to see her mission out.

Shadow in the Cloud feels very theatrical for most of its runtime, with Moretz talking to the rest of the crew via audio only. Despite her being capable, and an officer, the rest of the crew chalk up any issues to being a woman, or flight jitters. As she works to fight off all the troubles, monsters and fighter planes by herself, this first half cements Garrett  as a strong character, ready to take on anything. Sadly while the first half for the most part works, the latter half squanders much of the mystery, suspense and wonder the film sets up.

From shooting down Japanese fire planes, to fighting tooth and nail to keep her package safe, Garrett quickly becomes super human in her abilities. This feels very much in the vein of the Fast and the Furious franchise, with explosions just adding to the intensity, and all reality is thrown out of the window.

It is also worth noting that although he had his presence scrubbed from the film, the screenwriting of Max Landis still feels present in Shadow in the Cloud, especially in the final act, where it is basically a real life cartoon, and characters are just fodder for the bombastic scenes the film has planned. This feels very in line with how Landis loves to use clichés for storytelling, where at one particularly dumb moment, Garrett is saved by the explosion of a nearby plane, only to walk away without a scratch on her.

Taking on the Twilight Zone story Nightmare at 20,000 Feet but set in WWII had the potential to be a winner of an idea. Sadly, with a script that relied on sexism as the only reason a group of otherwise capable soldiers would not act like humans in a time of war, all sense of logic is thrown out the window. There is a fine line between commentary and cartoon, and Roseanne Liang with the help of Max Landis jumped over that line and never looked back.

Shadow in the Cloud feels like a movie made for the midnight drive in, all while aspiring to be more than the sum of its parts but missing the mark entirely. There are some good ideas, and a commanding performance by Moretz, but with a lacklustre script and action without purpose, much of it falls flat. While there are better options for genre cinema set in WWII — 2018’s Overlord is a fantastic alternative — Shadow in the Cloud is fine as long as you don’t go in expecting anything but dumb fun.

Shadow in the Cloud is a good concept that is lost under a lackluster script, but for people needing a b-movie flick, there are worse options out there. 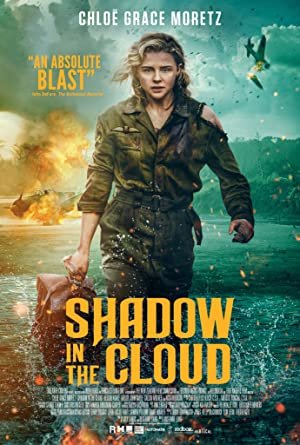