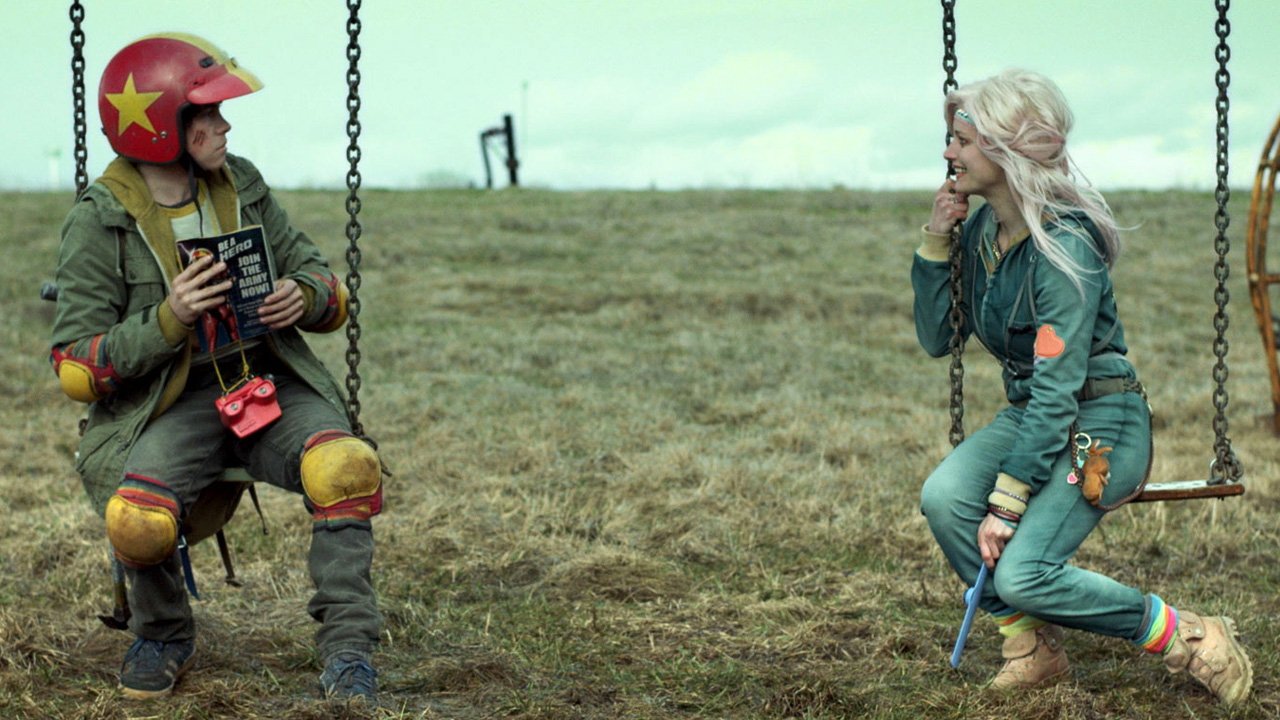 Turbo Kid falls into that peculiar new genre of deliberately “so-bad-they’re-good” movies that kicked off with Grindhouse (or more specifically, the fake trailers in Grindhouse). It’s a weird style of filmmaking that, on the low end like the Sharknado movies, delivers genuine garbage that thinks it gets away with it thanks to half-hearted stabs at irony. On the high end, like Hobo with a Shotgun or Black Dynamite, the movies work as comedies and also mix in an oddly sincere appreciation for the trash entertainment they are mocking. Turbo Kid thankfully falls into the higher end of the spectrum, and even if it’s not the finest example of the new B-movie format, it’s at least strong enough to find the cult appreciation it was made for.

Munro Chambers stars as a sweet and lost teenager living in an apocalyptic setting that looks like a combination of landfills and garbage dumps. He piddles away his days collecting old toys and comic books in between rounds of fatal chases with the bondage biker gangs who run the remaining semblance of society. One day, he makes his first friend in the impossibly perky Laurence Leboeuf. Through a series of deliberately corny montages, they become fast friends. Then, they raise the ire of the evil boss man of the land (he’s played by the great Michael Ironside and has an eye-patch, so you know he’s trouble!). Ironside sends out his army (led by a henchman who loves flinging around saw blades) to crush our plucky heroes. Thankfully, they find a New Zealand cowboy (Aaron Jeffery) and a functioning Turbo Kid suit (complete with an “exploding head” laser gun) to help their cause. So things just might work out.

Yep, as you may have gathered, things are pretty ridiculously dumb in Turbo Kid land; but thankfully, lovingly and reverently so. It’s the feature length debut from the Canadian filmmaking collective of co-directors Francois Simard, Anouk Whissell, and Yoann-Karl Whissell (aka RKSS: Road Kill Super Stars), and the gang clearly has a deep affection for the bargain bin VHS trash heap of the 80s. Their film mixes and matches bits from Mad Max rip offs, BMX Bandits, Scanners, Captain Power, and seemingly every other low-rent 80s/90s genre production into a mixtape of tacky delights. Colours are bright, gore runs rampant, emotions are sincerely sweet, music is synthesized, and everything is absurd. It’s the type of move where you laugh at limbs being chopped off one second and then smile at a sincere biking montage the next. Sure, it’s for a select audience, but the RKSS folks are clearly part of the audience and know how to serve up what trash-loving cultists crave.
Their cast is also quite good and game, from Chambers’ innocent ass-kicker to Leboeuf’s adorably annoying sidekick and Ironside’s cartoon supervillain (the Scanners/Starship Troopers character actor is clearly having a ball and his joy is infectious). Turbo Kid finds just the right balance between sincerity, stupidity, and irony for this brand of B-movie homage to work. It’s arch and silly, yet all done with love and genuine hilarity. That balance is harder to pull off than it seems, and the RKSS team deserve praise for managing to do it. Granted, their feature length in-joke might feel a bit long, even at a trim 93 minutes, and it serves up nothing in the way of meaning or subtext; however, for the folks who will appreciate this sort of thing (aka the people who would consider watching a movie called Turbo Kid in the first place and are primed to laugh at the 1997 future setting), it’s a hoot.

It’s hard to say how long this neon cheese homage trend will last. There are only so many times filmmakers can trot out the clichés of 30-year-old films for loving laughs. However, the Turbo Kid team have certainly made a strong case for at least one more effort slipping into the subgenre. Given how clearly low-fi the production was (funded by Canada and New Zealand and filmed in rural Quebec), the fact that they were able to deliver something this deliriously entertaining from scotch tape, pocket change, junkyard finds, and neon dreams is a testament to their passions and talents. It’ll be exciting to see what RKSS serves up next, but hopefully they have a few more of their own ideas to add to the mixtape next time. (Phil Brown)

Turbo Kid team have certainly made a strong case for at least one more effort slipping into the subgenre. 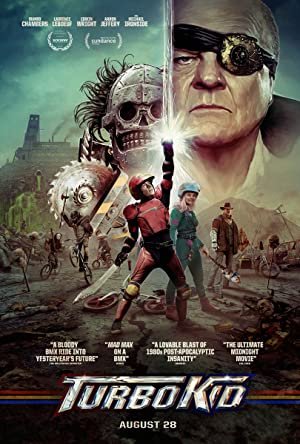