A Walk Among The Tombstones (2014) Review 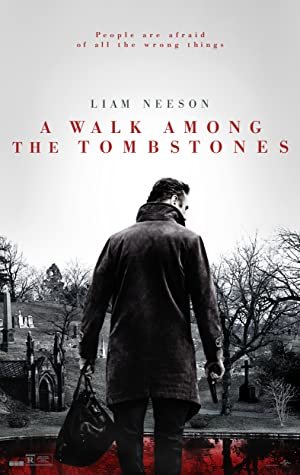 Stop the presses! Liam Neeson is playing a grizzled cop in a movie again. It’s what the man who was once Schindler does now, making an unexpected late career shift down genre film way. Ever since the rather excellent slice of Eurotrash revenge that was Taken, putting Neeson on a poster clutching a gun has been a surefire way to guarantee a little box office success.

Sometimes the results have been amusing (Non-Stop) and sometimes they’ve been amusingly terrible (Taken 2), but Liam Neeson: Violent Avenger might as well be a Netflix category now. All of which brings us stumbling towards this week’s chapter of violent Neesonism that is A Walk Among The Tombstones. It’s the first time that Neeson has played a grizzled private eye in film, hard as that might be to believe. There’s even a chunk of the running time in which it appears that the movie is worthy of the stunt casting. Unfortunately, that’s not the whole story.

The film starts out promisingly enough. Neeson plays a disgraced cop turned private eye in the film noir mode. He’s not a practicing alcoholic though, taking in AA meetings instead of belts of scotch when things get stressful. Almost the second the movie starts, the man has been called out on a job. In this case, a drug dealer (Dan Stevens) hires him to track down the people who murdered and mutilated his wife. They wanted ransom and he paid, but she was returned in tiny pieces. Neeson is disgusted by Stevens’ profession, but even more disgusted by the crime.

So he takes the case and comes to learn that he’s on the trail of a pair of serial killers who target drug dealers for kidnapping/ransom/murder knowing that there’s no way the police will ever be involved. It’s a clever premise and a suitably sleazy story that plays out well. Then about 30 minutes into the movie, Neeson meets a precocious homeless teen (Brian ‘Astro’ Bradley) who becomes his partner and then the movie sadly falls apart.

“When the film works, it feels like one of the violent and nasty neo-noirs that filled screens in the 90s after the success of Se7en.”

When the film works, it feels like one of the violent and nasty neo-noirs that filled screens in the 90s after the success of Se7en. Writer/director Scott Frank (who scripted Get Shorty, Out Of Sight, and Minority Report, amongst others) has a good ear for hard boiled dialogue and knows how to delve into darkness without violating good taste. In Neeson he’s got a grizzled detective who can skirt morality into anti-hero territory while remaining likable. In Dan Stevens he’s got a strong drug-dealing dark second lead. He even follows around his killers in parallel to the main story and David Harbour delivers a delightfully sadistic villain who can be terrifying to watch. When the film is routed fully in its hard-R genre roots it feels like nasty, fun B-movie entertainment. Too bad that isn’t all that the filmmakers were aiming for.

Brian Bradley’s comic book and detective-novel-obsessed kiddie sidekick poisons the movie to Jar Jar Binks proportions. Bradley isn’t a horrible actor, but the character he’s playing is so over written and unbelievable that it doesn’t matter. He’s a pint-sized profit with a knack for one-liners who is a distracting tension killer in the middle of a functioning thriller. He adds nothing and almost ruins the movie just by existing, which a real shame. Yet, it’s not the only major problem with the movie. Frank (as well as the novel’s original author Lawrence Block) also chose to give the story a 1999 period setting with constant Y2K references for no particular reason.

Perhaps it was supposed to provide a certain level of apocalypse anxiety as an extra tonal flavor, but it adds nothing beyond endless distracting discussions of Y2K that grind the movie to a halt. Also, making this private gumshoe a recovering alcoholic was a somewhat amusing twist, until the endless discussions of the importance of recovery start to drag the movie down. Even the film’s big action climax is poisoned by a pretentious reading of the twelve steps that ruins the sequence with gag-inducing levels of faux-profundity.

The most frustrating part of watching A Walk Among The Tombstones is that there is about an hour of a rock solid genre movie in there that’s spoiled by an hour of useless extraneous characters, themes, and scenes. When Scott Frank and his cast focus on making a nasty crime thriller/serial killer picture, they deliver genuinely lurid thrills that sting and sing as well as they possibly could. Whenever things get serious, pretentious, or child-star precious, the movie transforms into a big stinking bore. So, audiences are left with half a good film padded out with tiresome filler.

Having not read the book, I can’t say whether this was the result of classic studio interference or merely an accurate reflection of the flawed source material. However, I can comfortably state the film is a big missed opportunity. This could have been another nasty thriller to add to Neeson’s resume. Instead, it’s just another mediocre entry in his career. What a shame. Given the actor’s advancing age, there are only a few more action flicks and thrillers that he’ll be able to carry and it’s hard to watch him waste his time on passable junk like this.

The most frustrating part of watching A Walk Among The Tombstones is that there is about an hour of a rock solid genre movie in there that’s spoiled by an hour of useless extraneous characters, themes, and scenes.
REVIEW SCORE
5
File Under: Action, Film, Nintendo, Thriller