The Only Title to Launch Alongside the Xbox One X
SCORE: 5/10 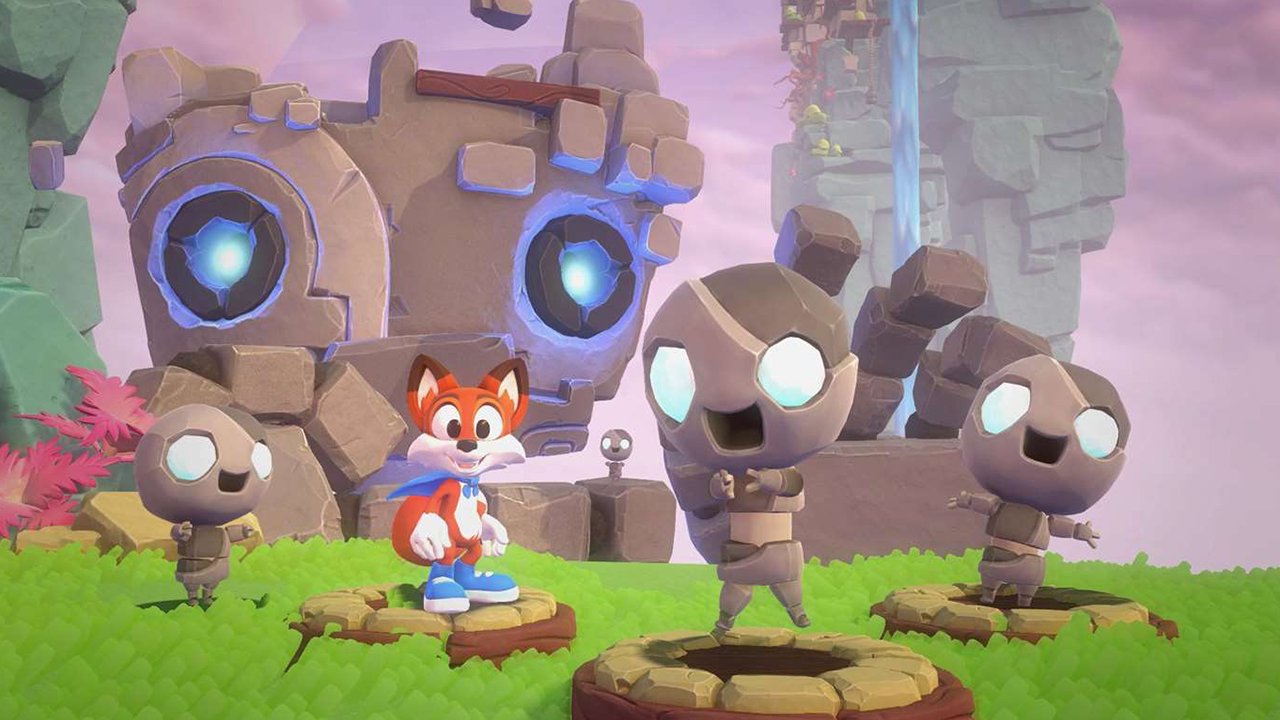 2017 has seen the release of so many 3D platformers like Poi, Yooka-Laylee, the Crash Bandicoot trilogy, A Hat In Time, and last but certainly not least Super Mario Odyssey. Where does Microsoft’s one and only Xbox One X launch title, Super Lucky’s Tale, rank on that list? Somewhere near the bottom.

Super Lucky’s Tale is a follow up to Lucky’s Tale, a VR exclusive for the Oculus Rift. Microsoft hasn’t done a good job making clear that this game is a wholly original full-fledged title and not just some remake of the original. Don’t fret if you’ve not played the original as you won’t be missing out on anything aside from maybe a stiff neck as the only thing connecting the two games is that they star the same character, a fox named Lucky.

Lucky gets sucked into a magical book where he has to battle the Kitty Litter, a family of cats with their father being the leader of the group—Bowser and the Koopa Kids anyone? The story isn’t all that deep or important here, just know that Lucky has to collect clovers, which open up stages and eventually boss fights against all his feline foes, that will hopefully lead to his escape from the book. It’s no Citizen Kane, by any means.

The controls here are pretty simple and intuitive. Lucky has a double jump, a tail whip that can smash boxes and temporarily prevent him from falling, and can burrow underground where he can move around like Bugs Bunny. Enemies must be jumped on to be defeated, but can be stunned with a tail whip, although I didn’t find doing so all that useful. Movement can feel a little clunky at times, but for the most part, it feels okay.

While the controls aren’t really an issue, the game’s camera is. Unlike most 3D platformers, the camera isn’t able to be rotated fully around Lucky and instead is locked into different positions depending on the type of level. Some levels allow the camera to be panned to one of three positions, none of which allow seeing away from the stage for some reason. Other levels have the camera locked as if in a traditional 2D platformer, which works fine.

The biggest problem, however, is when levels combine 2D style platforming with the 3D style camera. In these stages, the camera is positioned in such a way that it makes it nearly impossible to have any depth perception. Most 3D platformers would have the camera angled downward a bit more than Super Lucky’s Tale does in these stages which instead almost has it parallel to the character. That said, I had depth perception issues in various stages throughout, not just the ones with that annoying camera. Being able to judge where jumps are is the core mechanic of any 3D platformer, and somehow Super Lucky’s Tale manages to mess that up, though a minority of its running time.

When the camera isn’t causing issues, Super Lucky’s Tale is alright at best, although quite generic as it doesn’t do anything we haven’t seen before. Coins to collect? Check. Jumping on enemies heads to kill them? Check. Playing as an anthropomorphic animal? Check. Having an overworld with doors to the next level that requires collecting a certain number of a required item? Check. Bees, caterpillars, and ghost enemies? Triple check. The only thing I’d even call original is the variety of stages and how the total number of the main collectable item—clovers—is set to 99 instead of an even 100, which will surely trigger more people’s OCD than just mine.

So about that variety of stages, Super Lucky’s Tale does a good job of mixing things up so you’re not just doing the same type of level one after another. As mentioned there levels that play like a 2D platformer, and ones that are large and open like a traditional 3D platformer, as well as a few endless runner levels, a few levels that has you sliding statues around to solve puzzles, and even a handful of levels that have you tilting a board to roll Lucky around inside of a marble. Again, none of these are exactly original or feel fresh, but variety is the spice of life, as they say.

Graphically speaking, Super Lucky’s Tale is bright and colourful, though nothing all that impressive. Keeping that in mind, I find it odd that the game only manages to run at 1080p 30FPS on the original Xbox One and the Xbox One S versus 4k 60FPS on the Xbox One X. Nothing here is graphically demanding, and due to the way that camera can’t rotate all the way around the character, there isn’t a lot that needs to be rendered at one time. I played all the way through the game on my Xbox One S before booting it up on my gaming PC thanks to this being an Xbox Play Anywhere title, and let me tell you playing at 60FPS just feels so much better; it isn’t just a visual thing.

I’m no developer, but I just don’t understand how this couldn’t manage to hit a higher framerate on anything but the Xbox One X. Super Mario Odyssey is a far more busy and beautiful game on the less powerful Switch, yet that it manages to run at 900p 60FPS. I realize I’m comparing a budget title from a small studio to an AAA 1st party game here. Either Super Lucky’s Tale is poorly optimized or—put on your tinfoil hats here—Microsoft had the game purposefully restricted to 30FPS to force it as a meaningful Xbox One X title.

I did run into a few bugs in my time with the game. A few times Lucky got stuck in the ground, which seemed to happen after getting hit mid-air. The only way I was able to get him to pop back out of the ground was to pull up the Xbox One guide. Strangely enough Lucky would pop back on top of the ground the moment I pressed the button. Also had the game crash to the Xbox dashboard once when trying to fast travel to a previous area. Luckily, these issues didn’t occur all that often.

Super Lucky’s Tale took me around 10 or so hours to 100 percent complete, and I’d estimate that I could have probably completed the game in maybe 8 otherwise. Smaller levels such as the endless running and puzzle levels have a single clover while each main level has 4 clovers available: one for completing the level, one for finding the letters of the word ‘Lucky’, one hidden clover, and one for collecting 300 coins. Some levels do a nice job hiding the letters and extra clover, but most are rather obvious.

There’s a running tally of coins collected in the overworld which can be used for absolutely nothing as there are no shops to spend them on, no extra levels to unlock, and no achievements linked to them. The same could be said for the total number of lives, as running out of them only takes you to the start of the level—with 5 fresh lives—instead of the previous checkpoint. I don’t understand why coins or lives were included here, other than they are a carryover from other games in the genre, as they serve no real purpose aside from the 300 coin clover.

I wanted to love Super Lucky’s Tale, but at the end of the game, I felt next to nothing. This is easily one of the most generic and forgettable games I’ve played in a very long time, which is a shame due to it being one of the only first party exclusives that Xbox released this year. Xbox players deserve better.